In 2003, Bill James released the paperback version of his classic The New Bill James Historical Baseball Abstract.  In short, it’s the ultimate bathroom book. Nugget upon nugget of statistical gold that only the Father of Sabermetrics can give you.  In the 1,000+ page book, there is a single page which is of great interest to us today. James predicted what the landscape of baseball will be like in 2015. With the year just days away from wrapping up, we thought about examining his predictions and seeing what they look like in the context of today’s game.

1) “That baseball will eventually solve or contain the problem of economics corroding competitive balance.” Keep in mind that James wrote this book fresh off a run by the Yankees that saw them reach the World Series six times in eight years (winning four). The 1990s saw the Braves make it to five World Series, the Blue Jays win back-to-back titles, and salaries continued to soar. 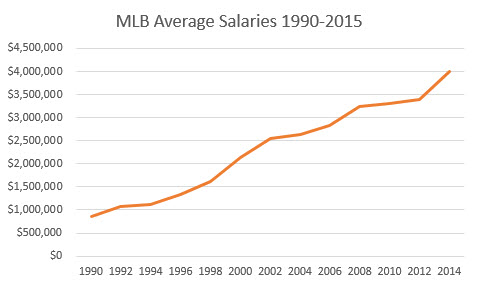 The 1994 strike was a direct result of the trend towards the large market teams spending outrageous amounts on free agents while small market teams, like Bud Selig’s Brewers, struggled to remain in the league. Owners wanted revenue sharing, a salary cap, and a luxury tax, but the union wouldn’t budge and the strike occurred which nearly destroyed the game.  Eventually the owners got revenue sharing and a luxury tax, but of course a salary cap is nowhere to be found and the spending is presently at an unbelievable level.  Giancarlo Stanton, Zack Grienke, and David Price are making the contracts of the early 1990s look like a high schooler’s wage at a fast food restaurant.

So no, the economics hasn’t necessarily changed in the way that James would have predicted. The large market teams can still afford to acquire players that the other teams can’t, but as this year showed us, “competitive balance” has changed.  The Royals won the World Series this year with a payroll of $112 million, while the Dodgers boasted a $282 million tab and were bounced in the NLDS. There certainly isn’t “economic balance” but there most certainly is “competitive balance.” The ironic thing is that Bill James can be partly credited for this phenomenon.  His statistical pioneering ushered in the age of advanced metrics for the baseball-loving nerds. Those nerds got lucrative jobs with big league clubs and are a vital part in how teams evaluate players.  James himself has been a Senior Advisor on Baseball Operations to the Boston Red Sox since 2003 and that franchise has won three World Championships since then.

While there have been two teams that have won three championships since the time James’ book was released (Red Sox and Giants), the majority of the last decade plus has been an era where any team has a chance and where money in the coffers doesn’t guarantee a trophy in the case.

2. “That baseball will eventually gain control of the problem of the ever-lengthening games.”  This year, Major League Baseball instituted pace of games rules that were intended to shorten games that were becoming just too lengthy for multiple reasons.  The rules targeted a couple specific areas. The time in between innings was shortening by 12 seconds which doesn’t sound like a lot, but it adds over the course of a game. Also, batters were told to stay in the box after each box unless there was a foul ball or anything along those lines. While it took adjustment by everyone involved the results were promising. According the Baseball-Reference.com, the average time of a game in 2015 was exactly three hours, which is down from 3:07 in 2014. Of course, our forefathers were still guffaw at our marathons of games, but progress is being made. The elimination of overbearingly long replays would decrease this time even further, but that’s another topic for another time. 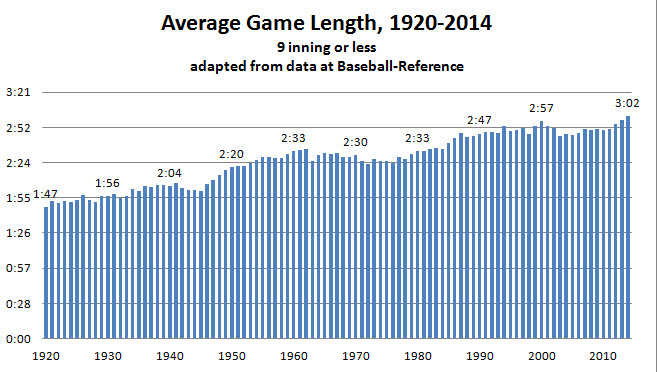 Courtesy of Scott Lindholm from Beyond the Boxscore.

3. “That the hundred-year trend of using more and more pitchers will end, and complete games will soon become more common, rather than less” This prediction by James is probably the one he whiffed on the worst.  This past season, Major League Baseball saw the fewest complete games in a season ever.  Pitchers tossed 104 complete games across the majors, which is down over 100 games since James made this prediction.  A handful of players were tied with the league high of four complete games each. The most since 1920 is 36 in one season by Bob Feller in 1946. The demand for relief pitchers just accentuates the trend that really isn’t a trend anymore: starters don’t finish what they started anymore.  Seven innings is typically the goal at which point the setup man and closer will take it from there.  Teams aren’t willing to risk the arms of starters who in some cases are getting paid $1 million a start.  Pitch counts are treated as important as the outcome of the games sometimes and that isn’t going to change anytime soon. That’s my bold prediction.

Number of Complete Games in MLB since 2000

4. “That the trend toward more strikeouts and more homers from the top of the order to the bottom will also end soon.” The most fascinating aspect of James’ book has always been, to me, is his failure to acknowledge the steroid issue. The book was released in 2003 and enough was known at that point that it’s worth mentioning.  Things weren’t known to the extent that they are now, but it was obvious then that the numbers were inflated as well as the muscles of these sluggers. James uses as his reasoning for this prediction that eventually teams will realize that homers do not produce the consistent results that Tony Gwynn-like players provide. He claims “Sooner or later, we’re going to get some little guy with limited athletic ability who just draws walks and punches singes, somebody will put him in the lineup in [front] of [a slugger]…and the big guy will drive in 175 runs, and everybody else will go scrambling around looking for little guys who can get on base.” James isn’t saying homers aren’t valuable, obviously they are, but they are more valuable when guys get on base in front of the big boppers. James implies that eventually the guys making the big bucks will be the speedy leadoff men, not the thunder in the middle of the lineup. Well Giancarlo Stanton’s contract certain blows that theory out of the water.

James did get something right – home runs did decrease, but clearly not for the reason he was predicting.  Strict drug testing has proved very successful for baseball and the home run numbers prove that. While the number did creep up in 2015 drastically over 2014 (which had the fewest number of homers since 1995, a strike-shortened season that came prior to expansion), in general the number of homers has dipped since the late 1990s and early 2000s.

Meanwhile strikeout numbers have skyrocketed, which correlates with the increased dominance of pitching. Of the top 18 single-season strikeout leaders for batters, all of them happened since James wrote his book.

Most Strikeouts by Batters in Single Season

Pitchers throw the ball harder, train harder, and in general take better care of their bodies.  You don’t hear much about David Wells like stories of getting hammered and throwing a perfect game the next day. Pitchers in 2015 are younger, healthier, and more educated, and the batters are the ones that are experiencing the ramifications.

Baseball doesn’t exactly look like what Bill James thought it would in 2015, but that’s okay.  I think James would have been thrilled to have been told in 2003 how healthy baseball would be in 2015: attendance rates are higher than ever and so is revenue.  One thing would make it better: if James would release an updated Historical Abstract and while he’s at it, he might as well thrown out predictions for 2030.

Cordell has been a fan of the Philadelphia Phillies since Joe Carter happened and is gearing up for another decade of losing baseball. He has an appreciation for the history of the game, but tries not be totally closed to innovation and change. He works at a software company and resides in Pottstown, PA.