After many home runs and a few other fireworks, the two teams from Texas have been eliminated, each in five game series. Now we have the scrappy bunch from Kansas City, who use Gold Glove defense and an incredible bullpen to keep their opponents from scoring and the upgraded Blue Jays who prefer to keep fielders out of the equation whenever possible. For both teams, this series should be a little like moving up from the kids table, as there was no question during the regular season that these were the top two teams in the American League.

Will we finally see the pitching we have been promised?

This was the second season in what looks like it could be the second deadball era, and most of the best pitchers in the game were on playoff teams. Despite this, no game in the ALDS finished with a run total below six and half the games finished at nine or more. With pitchers like David Price, Johnny Cueto and Dallas Keuche,l and considering run scoring is generally at a premium in the playoffs anyway, a little better pitching was to be expected.

Of continuing note are Price and Cueto, as they were Cy Young contenders during the season (Price will probably win the AL award, switching leagues cost Cueto a chance at the NL) fighting among the best in baseball. In the playoffs however, it has been a different story. After posting a 2.62 ERA in Cincinnati, Cueto struggled mightily in five starts from August 21st through September 13th with a 9.70 ERA and .390 average against. It appeared to be this Cueto who pitched Game 2 against Houston, allowing four runs in six innings although the Royals eventually won 5-4. In the series finale, he was significantly better, allowing just two runs on two hits with eight strikeouts through eight innings. We have seen him even better than this at times and he will have to be to keep the high powered Blue Jays offense from running up the score. Since he has been so wildly different in his starts with Kansas City, however, it’s hard to tell what to expect. 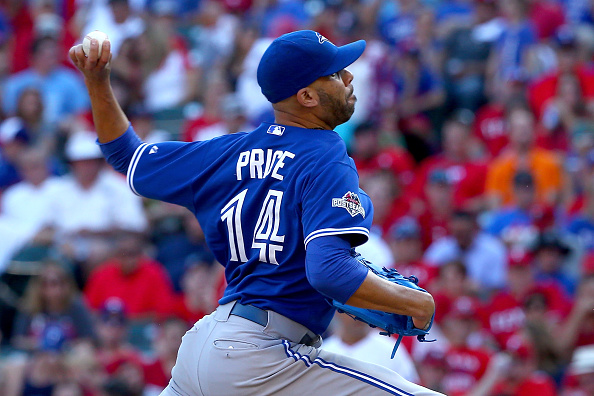 ARLINGTON, TX – OCTOBER 12: David Price #14 of the Toronto Blue Jays pitches in relief in the sixth inning against the Texas Rangers in game four of the American League Division Series at Globe Life Park in Arlington on October 12, 2015 in Arlington, Texas. (Photo by Tom Pennington/Getty Images)

Can David Price be the ace the Blue Jays paid for?

For the Blue Jays and Price, Toronto won the Division Series despite of him, not because of him. After posting a 2.30 ERA after the trade (2.45 cumulative), they were expecting to ride Price early and often throughout the playoffs. He pitched in game one and allowed five runs in seven innings in the Rangers win. Staying in the bullpen for the rest of the series, he was used again with a six run lead and allowed three more runs in three innings. He will certainly be back in the rotation for the round against the Royals, but how much the Blue Jays can depend on their ace is questionable, particularly with how well Marcus Stroman, Marco Estrada, and R.A. Dickey pitched in the first round.

Price is a free agent at the end of the season and cost Toronto Daniel Norris and Matt Boyd, the former of which has already shown some greatness for Detroit. The fact that the Blue Jays likely won’t have him around next year is possibly why they were so quick to use him in a relief role, making sure they get every ounce of value before he is gone. 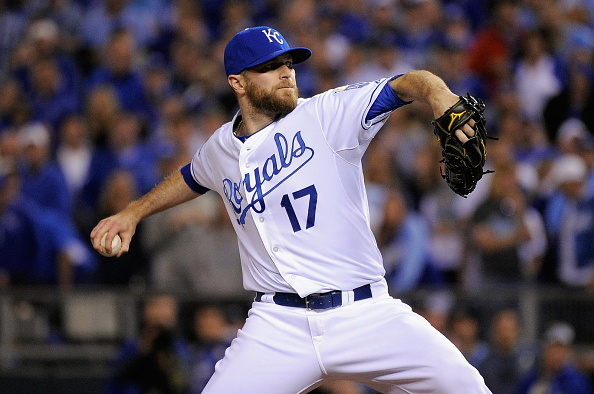 KANSAS CITY, MO – OCTOBER 14: Wade Davis #17 of the Kansas City Royals throws a pitch in the ninth inning against the Houston Astros during game five of the American League Divison Series at Kauffman Stadium on October 14, 2015 in Kansas City, Missouri. (Photo by Ed Zurga/Getty Images)

Which perfect closer will break first?

Both the Royals and Jays needed to replace their closers during the season, but Roberto Osuna and Wade Davis did an excellent job filling the void both during the regular season and beyond. As the Royals have the deeper bullpen of the two teams, Osuna was used slightly more as he pitched 5.2 innings in the five game series including 1.2 in the finale. Davis pitched four innings over the same span as well, including one inning in the finale and neither pitcher allowed a run.

In addition to not blowing anything, neither closer has been close with Osuna holding the Rangers hitless and Davis giving up just one. Both have been nearly spotless in their careers as closer, but those careers have just recently begun and chances are, one is going to break before this whole thing is done. 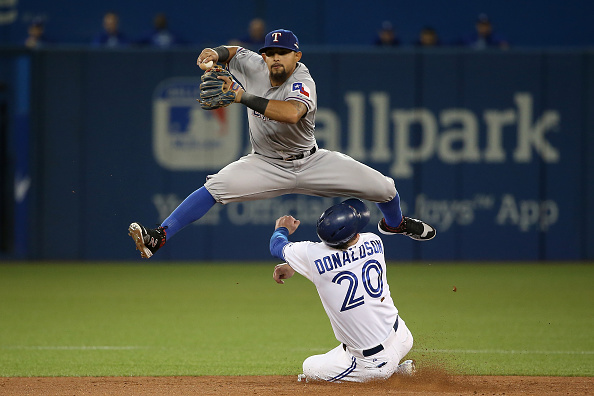 TORONTO, ON – OCTOBER 08: Rougned Odor #12 of the Texas Rangers collides with Josh Donaldson #20 of the Toronto Blue Jays after taggin him out in the fourth inning during game one of the American League Division Series at Rogers Centre on October 8, 2015 in Toronto, Ontario, Canada. (Photo by Tom Szczerbowski/Getty Images)

Can the Blue Jays use their Canadian magic to destroy the Royals defense?

If you didn’t see the seventh inning in game five against Texas, take the time to watch it now (if you did see it or are a Rangers fan, feel free to skip to 2:52):

The Rangers weren’t the best defense in the regular season (that was the Royals), but they might have been the worst in the seventh inning against Toronto. After Texas took the lead thanks to an odd play where Russell Martin’s return throw hit the bat of Shin-Soo Choo and Rougned Odor scored from third. Playing under protest, the Rangers infield forgot how to catch the ball as four dropped balls lead to a run and two on with two outs. The infamous Jose Bautista bat flip occurred shortly thereafter, but without the miscues, it would only have tied the game instead of putting it out of reach.

This is not legitimately saying anything about baseball karma (the play in question was correctly called anyway), but if the Blue Jays are to beat the Royals, they will have to do something to disarm the defense. Whether that is with aggressive slides (like the one at home in the video above), bunts or hitting against the shift, the Astros proved that smashing the ball to the outfield over and over again is not enough to score runs. The Jays have a more complete offense than the Astros, but the Royals defense has a way of diminishing any team’s production no matter who’s on the mound or at the plate. 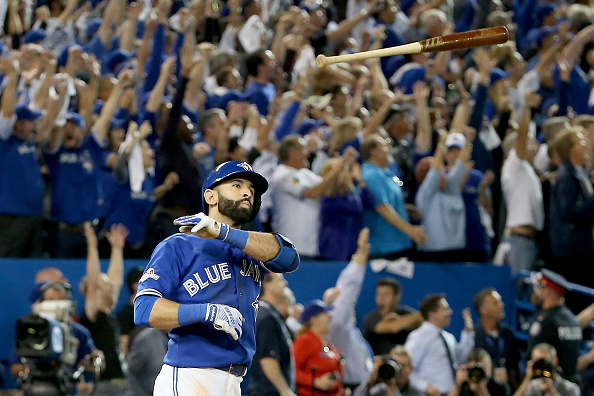 TORONTO, ON – OCTOBER 14: Jose Bautista #19 of the Toronto Blue Jays throws his bat up in the air after he hits a three-run home run in the seventh inning against the Texas Rangers in game five of the American League Division Series at Rogers Centre on October 14, 2015 in Toronto, Canada. (Photo by Tom Szczerbowski/Getty Images)

Will Joey Batflips turn the ALCS into the WWE?

Apparently you can mess with Texas. To end that crazy inning, Bautista crushed a ball off the facing of the upper deck in left center, stood and watched it leave before tossing his bat almost as far. This of course ultimately incited further milling about by players on the field, adding to the drama created after the initial interesting call.

Aside from the fact that the two greatest collections of talent in the American League will be facing off, there will be a very intriguing storyline of the biggest showboating team in baseball (those mad about the Bautista bat flip must have missed Edwin Encarnacion watching his game tying home run earlier in the game) facing off against a team that won’t tolerate that kind of behavior. You may remember the Royals of early 2015 as a team playing with a chip on their shoulder. They had a legitimate point as many national writers picked them to finish third or worse in the division after taking the AL pennant the year before, but they possibly took it a bit too far. Yordano Ventura had an odd tendency of hitting people he didn’t like and multiple bench clearing incidents ultimately lead to Ventura, Edinson Volquez, Lorenzo Cain, and Kelvin Herrera all getting suspended in late April.

The Royals and Ventura seem to have matured as the season went on and they retained the respect they earned the year before. Tensions are certain to be high, however, with the American League on the line and with one team ready to celebrate and another ready to fight, things could get very interesting.