Well, it took four seasons of mediocrity and dreadful play, a new manager, GM, and president of baseball operations, along with a Jonathan Papelbon crotch grab, but the Phillies appear to be finally ready to break it all down and start from scratch.

The Phillies’ deal with the Astros last week that sent young star closer Ken Giles to Houston for a handful of promising prospects was the first big sign that there is a new sheriff in town. While the old regime would have kept Giles, even though the team was going to struggle to compete, the Matt Klentak-Andy MacPhail administration appears to be building for the future.

Former GM Ruben Amaro Jr. would have refused to deal Giles because he was the team’s best player and because his presence might sell more tickets. Well, most fans don’t buy tickets merely to see a closer, especially when the team is terrible and the closer role doesn’t mean much when the team isn’t winning. Amaro made a name for himself (not a good name) by retaining veteran players who were well past their prime and letting sentimentality interfere with putting a competitive team on the field.

Indeed, the Phillies became a laughing stock within the industry, becoming the complete opposite of teams like the Cardinals, Royals, and Red Sox. Amaro eventually let go of the past (trading Jimmy Rollins, Cole Hamels, and Chase Utley), but it was too late. Those players’ value wasn’t what it would have been three to four years ago and the return (with the exception of the Hamels deal) was barely worth printing in the paper.

Coming into 2016, the biggest change the Phillies will be showcasing is their starting pitching. It’s been five years since the Phillies signed Cliff Lee to give them one MLB’s best rotations in the last couple decades. Obviously, the end result wasn’t what the team was hoping for, but no one is left from that staff anymore. Most of the starters for 2016 will be new faces in Philly. 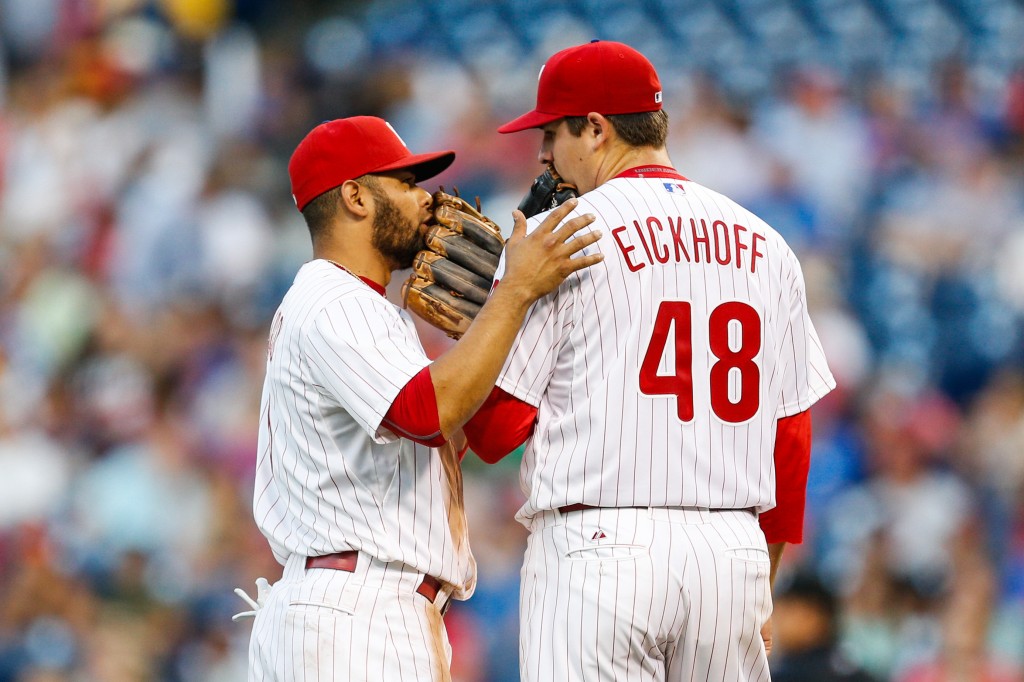 PHILADELPHIA, PA – AUGUST 26: Andres Blanco #4 of the Philadelphia Phillies meets with Jerad Eickhoff #48 on the mound after Eickoff after Eickoff gave up two runs in the first inning of the game against the New York Mets at Citizens Bank Park on August 26, 2015 in Philadelphia, Pennsylvania. (Photo by Brian Garfinkel/Getty Images)

The rebuilding project really began with trading Hamels to the Rangers last season at the July 31 deadline. In return, the Phillies received a group of minor leaguers including Jerad Eickhoff, who started six games for the Phillies and pitched very well (2.65 ERA, 150 ERA+, 1.039 WHIP). Eickhoff will be in the starting rotation in 2016, and at 25, will be one of the younger members of the roster. He isn’t arbitration eligible until 2019 so as long as he continues to perform well and should be an intricate part of the Phillies for the next several seasons.

In November, the Phillies swapped minor league pitcher Sam McWilliams to Arizona for veteran Jeremy Hellickson with. Hellickson, who came up in the Rays system, won the Rookie of the Year Award in 2011, but his numbers since then have been pretty pedestrian (4.30 ERA, 91 ERA+, 1.325 WHIP). Obviously, Hellickson isn’t a top-of-the-rotation guy and his 2016 arbitration figure has yet to be resolved (expected to be around $6 million), but his presence won’t hurt a team that won’t be that good anyway.

The big Giles trade last week brought the Phillies a large bundle, including pitchers Vincent Velasquez, Brett Oberholtzer, and Mark Appel. Velasquez likely has the most upside and will possibly start in the bullpen. But he’s generally categorized as a starter, so it’s a matter of time before he starts for the Phillies. With Aaron Nola as the ace of the staff, Velasquez will be the bottom-of-the-rotation guy.

Oberholtzer will begin as the likely fifth starter and while he’s young, he has pitched for roughly a full season in the majors and shown the ability to pitch very well. He also has great control, which the Phillies need desperately (2.1 BB/9 for his career). Probably best known for plunking Alex Rodriguez last year and getting sent down to the minors, Oberholtzer will be looking to establish a home in the region where he grew up. (He was born and raised in Delaware.) It’s believed the reason Oberholtzer was demoted was because of the incident with A-Rod and maybe his immaturity was the reason the Astros were fine with dealing him.

Appel, the first overall draft pick in the 2013 Amateur Draft, isn’t viewed as a potential ace like he once was, but he is a great get for the Phillies. This already was a solid trade for them, and while Appel might not be the next Chris Archer, he could someday be a solid mid-rotation starter and you’re only as good as your third and fourth starters. (Isn’t that right, Dodgers?)

Most recently, the Phillies acquired veteran right-hander Charlie Morton from the Pirates and he will likely start in the rotation. Morton hasn’t done anything remarkable in his big-league career, but just like Hellickson, he won’t hurt the team. With a young rotation, it’s beneficial to have a veteran presence and the 32-year-old Morton qualifies.

Nola, Hellickson, Morton, Eickoff, and Oberholtzer. Not exactly the 1970 Orioles, but it’s a start.

No, the Phillies won’t be competitive this year. It still remains to be seen how they will score runs. Philadelphia still needs another outfielder and while Nola is the de facto ace of the staff, the rotation really could use another top starter. But rebuilding a team from the shambles that the Phillies were won’t be completed overnight.

GM Matt Klentak doesn’t appear to be the type of guy to rush into things and buy a bunch of expensive free agents. The blueprint for success has been demonstrated by teams like the Royals and Cardinals. Let’s be honest: For the majority of the Phillies’ history, they have been a bad team. Waiting a couple years to be competitive again won’t hurt anybody.

Cordell has been a fan of the Philadelphia Phillies since Joe Carter happened and is gearing up for another decade of losing baseball. He has an appreciation for the history of the game, but tries not be totally closed to innovation and change. He works at a software company and resides in Pottstown, PA.