Baseball fans are very protective of their team’s uniforms, and rightfully so. It’s the banner an entire fan base rallies around, something that unites them, and they don’t take kindly to someone disparaging their team’s look. It’s completely understandable.

Still, there’s no denying that some team’s uniform sets are better than others, and in some cases much, much better. And while there really aren’t any bad uniforms in baseball, there are a lot of them that could use a few touch ups. Some are outdated, some are cluttered, and some are just plain boring. On the flip side, there are a number of teams whose uniforms are so perfect you can’t imagine any changes to them. So where does your team rank?

Starting with the worst, here’s our rankings of every baseball team’s uniforms.

30. San Diego Padres
Did you know the Padres made a bunch of changes to their uniforms a few seasons ago? No? That’s probably because they have the most nondescript jerseys in all of pro sports. They’re bland, safe, and not particularly memorable. And that’s a shame, since the Padres have a totally unique color scheme just sitting there waiting to be used again. They wear the brown occasionally as a throwback, but it’s way beyond time to bring them back full time. 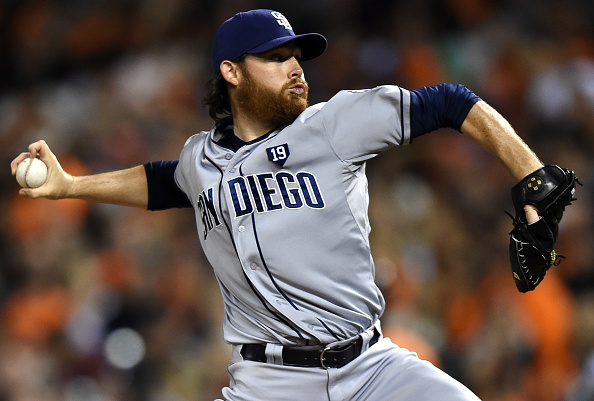 SAN FRANCISCO, CA – SEPTEMBER 26: Ian Kennedy #22 of the San Diego Padres pitches against the San Francisco Giants in the bottom of the first inning at AT&T Park on September 26, 2014 in San Francisco, California. (Photo by Thearon W. Henderson/Getty Images)

29. Houston Astros
The Astros: when uniform redesigns go terrible wrong. Their current set is nothing special, a boring look that doesn’t do justice to the team’s colorful history. It’s almost as if they were too concerned with making the uniforms look like throwbacks and ended up looking like they tried too hard. The cap with the star and ‘H’ logo is nice, at least. But the Astros have such a fun, weird uniform heritage it’s too bad they don’t do more to call attention to it. 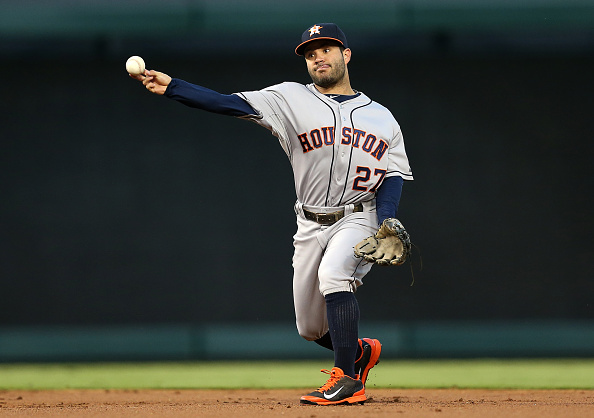 ARLINGTON, TX – SEPTEMBER 23: Jose Altuve #27 of the Houston Astros throws for an out at first during the first inning during a game against the Texas Rangers at Globe Life Park in Arlington on September 23, 2014 in Arlington, Texas. (Photo by Sarah Glenn/Getty Images)

28. Arizona Diamondbacks
Purple and teal may have been a lousy color combination, but at least it was unique to Arizona. Then they went to red as their primary color and made their look totally generic. The wordmarks on their uniforms look off, too: the lettering looks almost cartoonish and makes the whole thing look too busy. Just a totally forgettable uniform. 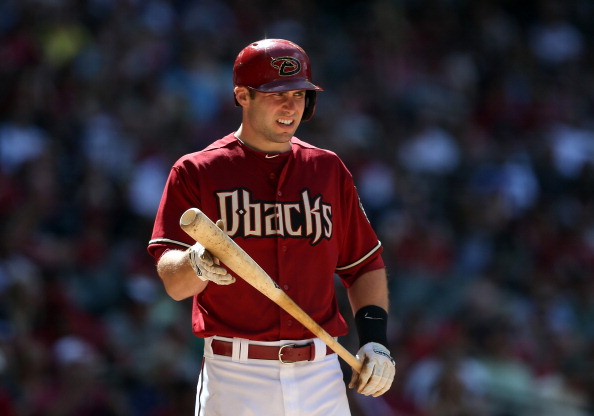 PHOENIX, AZ – APRIL 27: Paul Goldschmidt #44 of the Arizona Diamondbacks bats against the Philadelphia Phillies during the MLB game at Chase Field on April 27, 2014 in Phoenix, Arizona. The Phillies defeating the Diamondbacks 2-0. (Photo by Christian Petersen/Getty Images)

27. Tampa Bay Rays
Their primary logo looks like it should belong to a solar panel company. Their uniforms look like a generic team’s uniforms you’d find in a baseball video game that doesn’t have an MLB license. And since they use a little sunburst logo on the jersey, does that mean the team name refers to rays of the sun? Or is it still the fish? Either way, their entire uniform set is a sterile, boring mess. 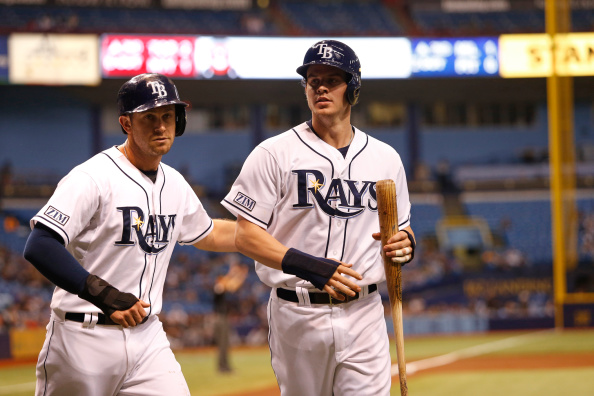 ST. PETERSBURG, FL – SEPTEMBER 19: Evan Longoria #3 of the Tampa Bay Rays (L) and Wil Myers #9 celebrate after both scored off a two-run double by Logan Forsythe during the first inning of a game against the Chicago White Sox on September 19, 2014 at Tropicana Field in St. Petersburg, Florida. (Photo by Brian Blanco/Getty Images)

26. Cleveland Indians
Cursive lettering at home, block lettering on the road, except for the cream colored home alternate that has block lettering, but not the blue alternate that has cursive lettering. Got that? The Indians have been tweaking their look for a while now and the results haven’t been great– they need to pick a look and stick with it. And if they’re really moving away from using Chief Wahoo, can they at least come up with something better than the generic block ‘C’ logo they’ve saddled themselves with? 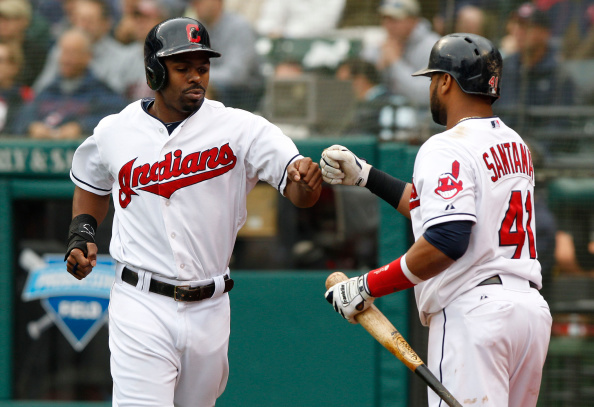 CLEVELAND, OH – SEPTEMBER 11: Michael Bourn #24 of the Cleveland Indians is congratulated by Carlos Santana #41 after scoring on a single by Michael Brantley #23 (not pictured) during the sixth inning against the Minnesota Twins on September 11, 2014 at Progressive Field in Cleveland, Ohio.(Photo by David Maxwell/Getty Images)

25. Milwaukee Brewers
No team needs six different jerseys, which is what the Brewers currently have at their disposal: a home, a road, a home alternate, a road alternate, a different alternate, and a throwback. It’s just too much, and it might be time to ditch the look they’ve had for 15 years and go back to their ’80s look. The glove and ball ‘MB’ logo is still one of the best ever, it’s time to bring it back for good. 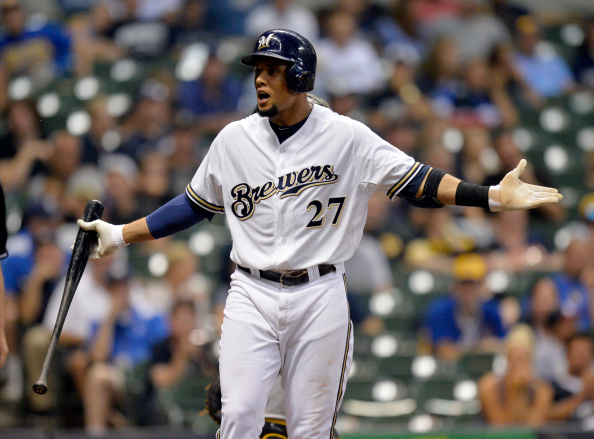 MILWUAKEE, WI – AUGUST 22: Carlos Gomez #27 of the Milwaukee Brewers complains about the umpire’s ruling on a pitch during the ninth inning against the Pittsburgh Pirates at Miller Park on August 22, 2014 in Milwaukee, Wisconsin. The Pirates defeated the Brewers 8-3. (Photo by Brian Kersey/Getty Images)

24. Texas Rangers
For some reason, none of the Rangers’ four different jerseys actually say ‘Rangers’ on them; instead, they all say ‘Texas.’ That’s really strange, considering it’s not a very long name and could easily fit on the front of a home jersey. The lettering they use is unnecessarily complicated too, with points and curves that look out of place. They could use some streamlining. 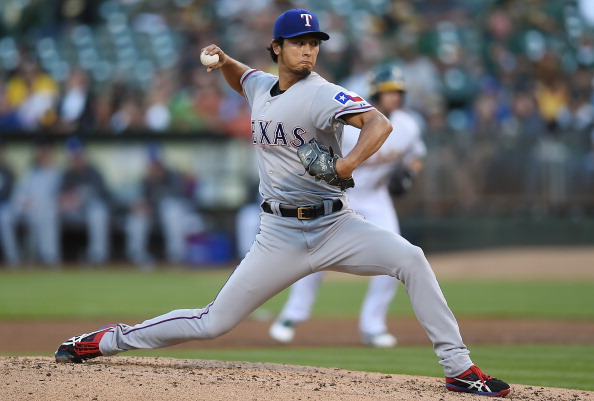 OAKLAND, CA – JUNE 17: Yu Darvish #11 of the Texas Rangers pitches in the bottom of the second inning against the Oakland Athletics at O.co Coliseum on June 17, 2014 in Oakland, California. (Photo by Thearon W. Henderson/Getty Images)

23. Minnesota Twins
They’ve updated their look this year but they don’t quite hit the mark. They’re perfectly nice and acceptable but seem almost sterile in a way– there’s nothing special about them. It’d be nice if they used their throwback alternate as the primary home jersey, since it has character. It’s a shame they didn’t retire the ‘Twins’ wordmark they use on their actual home uniform since it looks outdated. 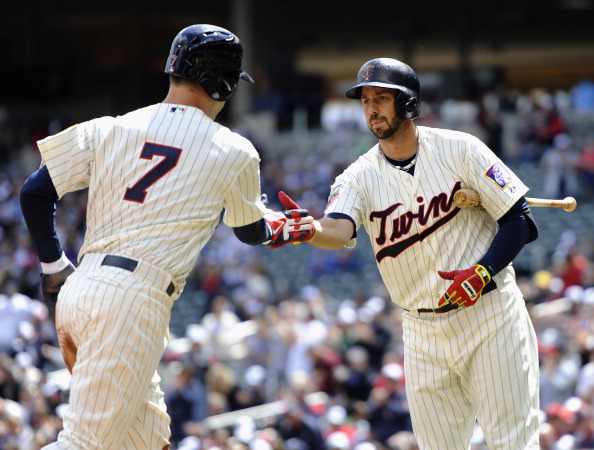 22. Colorado Rockies
They haven’t changed their look much since they entered the league in 1993, and there’s something to be said for that. The home jersey is a modern classic, striking the right balance between too much purple and just enough. The same can’t be said for their road jersey that doesn’t use enough purple and looks generic, or for their purple nightmare of an alternate jersey that takes things a bit too far. They could both use a redesign. 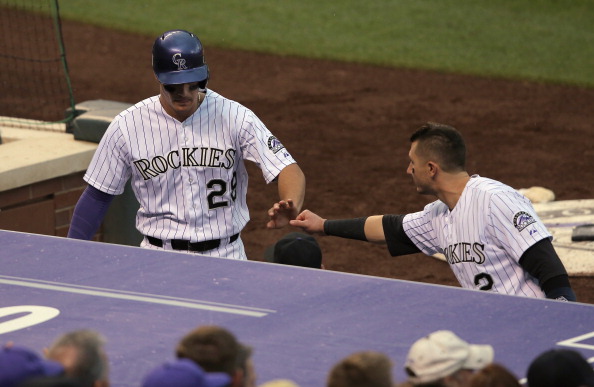 21. New York Mets
Just when the Mets do something smart and finally ditch their awful black jerseys and black trim, they go and add a camo alternate jersey because…uh, they really support the military? Who knows. Camo jerseys aren’t a great look to begin with and it doesn’t make sense for teams to add them to their regular rotation. And it’s too bad, because the Mets have sharp home and road designs. Their blue alternates are nothing special, though, and bring the whole set down a notch. 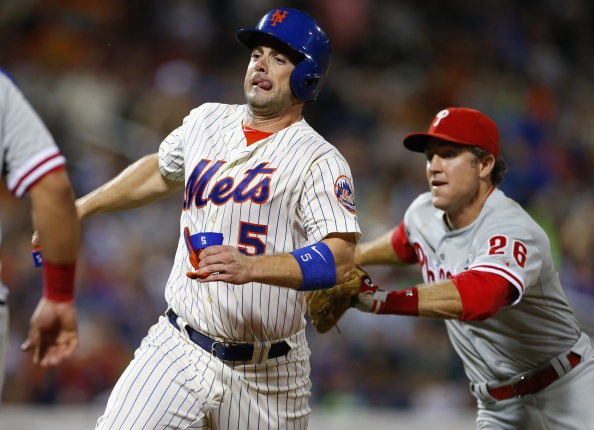 NEW YORK, NY – AUGUST 30: David Wright #5 of the New York Mets attempts to avoid the tag by Chase Utley #26 of the Philadelphia Phillies during the fourth inning on August 30, 2014 at Citi Field in the Flushing neighborhood of the Queens borough of New York City. Wright was originally called safe but the call was reversed on a video review. (Photo by Rich Schultz/Getty Images)

20. Miami Marlins
Love it or hate it, the Marlins have a uniform that is uniquely theirs and they get points for that. It’s a shame they don’t wear their road greys anymore since it’s such a nice looking jersey. In fact, none of their jerseys are particularly bad. They all very much read South Beach in their color scheme and appearance. It’s a shame they didn’t fully embrace the South Beach look and use neon pink as one of their colors. People would’ve lost their minds. 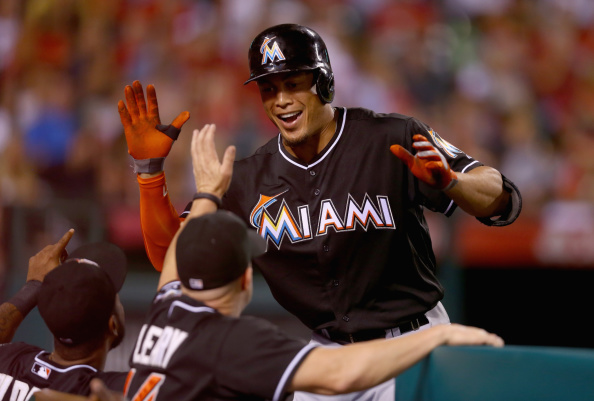 ANAHEIM, CA – AUGUST 25: Giancarlo Stanton #27 of the Miami Marlins receives high fives in the dugout after hitting a three-run home run against the Los Angeles Angels of Anaheim in the fourth inning at Angel Stadium of Anaheim on August 25, 2014 in Anaheim, California. (Photo by Jeff Gross/Getty Images)

19. Atlanta Braves
Their home and road uniforms are classics, but the Braves have way too many alternates to choose from. Do they really need a retro alternate home jersey when their regular home jerseys are retro-inspired to begin with? Plus there’s the blue-on-blue jersey that just doesn’t look right, and the red one with the ‘Braves’ wordmark in a stars and stripes pattern for some reason. Just too much. 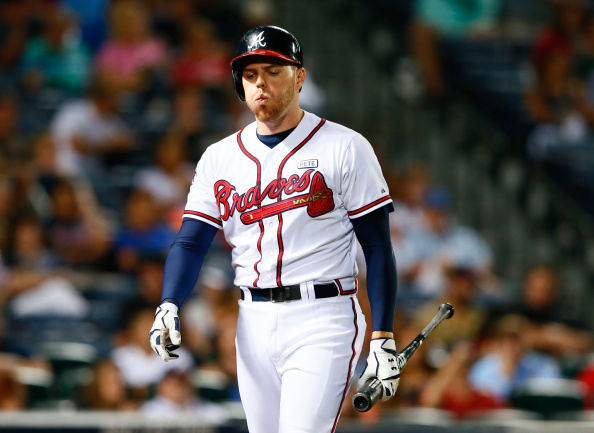 ATLANTA, GA – SEPTEMBER 19: Freddie Freeman #5 of the Atlanta Braves reacts after striking out in the eighth inning against the New York Mets at Turner Field on September 19, 2014 in Atlanta, Georgia. (Photo by Kevin C. Cox/Getty Images)

18. Seattle Mariners
Their new throwback jersey is quite nice, but they’re another team suffering from uniform overkill. They already have teal and blue alternates to go with the new throwback, so why not get rid of one of those? They all seem unnecessary. Plus they made slight changes to their road jersey that makes it seem too busy. A nice uniform set, but a crowded one that could use some trimming. 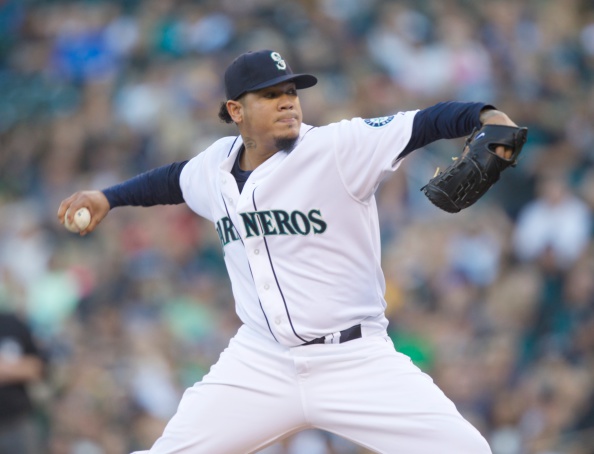 SEATTLE, WA – SEPTEMBER 13: Seattle Mariners starter Felix Hernandez #34 delivers a pitch in the first inning of a baseball game against the Oakland Athletics at Safeco Field on September 13, 2014 in Seattle, WA. (Photo by Stephen Brashear/Getty Images)

17. Washington Nationals
A great color scheme and a logo that references DC’s baseball past give the Nats a very nice set of tools to build a great uniform. It’d be nice if the home uniform actually said ‘Nationals’ on it instead of the cursive ‘W’ though. And their blue alternate with the ‘W’ logo in stars and stripes looks a little garish. Definite room for improvement here. 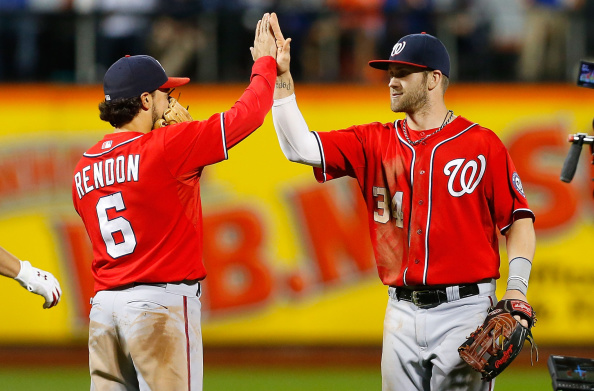 NEW YORK, NY – SEPTEMBER 13: Bryce Harper #34 and Anthony Rendon #6 of the Washington Nationals celebrate after defeating the New York Mets at Citi Field on September 13, 2014 in the Flushing neighborhood of the Queens borough of New York City. (Photo by Jim McIsaac/Getty Images)

16. Cincinnati Reds
A very clean, classic look that would be even better if they’d drop the black drop shadow from their uniform lettering and dump the overly ornate number style. Both of those things only serve to bog the whole look down, but those could easily be fixed. One of the best alternate jerseys in all of baseball, too. 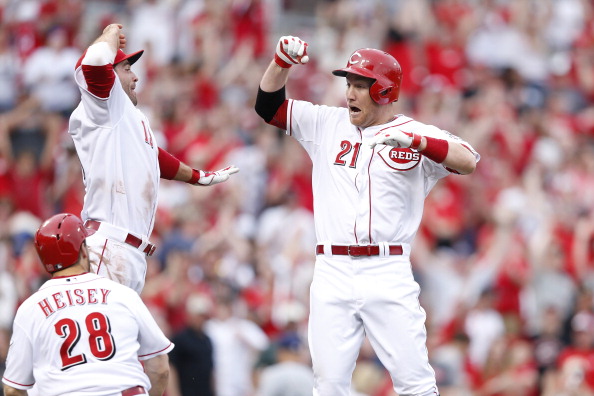 CINCINNATI, OH – MAY 4: Todd Frazier #21 of the Cincinnati Reds celebrates his winning hit with teammate Joey Votto #19 following the game against the Milwaukee Brewers at Great American Ball Park on May 4, 2014 in Cincinnati, Ohio. The Reds won 4-3 in ten innings. (Photo by Joe Robbins/Getty Images)