Yoenis Cespedes is, quite frankly, kicking ass and taking names for the Mets. He’s played in just 41 games with the team, and is hitting .309/.356/.691 with 17 homers. In 102 games before the trade with the Tigers, he homered 18 times. Those 17 homers also rank third on the Mets (behind Curtis Granderson and Lucas Duda, who have both played at least 120 games with the team), and his 2.9 fWAR is second among hitters on the team behind Granderson.

And for as good as Cespedes has been since the trade deadline, I think it’s safe to slap the “best deadline acquisition over the last five years” tag onto him, assuring he’ll go down in history with the likes of fellow deadline dynamos Randy Johnson and Carlos Beltran. But really, there isn’t all that much competition for Cespedes. Let’s roll back history and look at the best deadline acquisitions since 2011.

In 2011, Hunter Pence was fantastic for the Phillies, hitting .324/.394/.560 with 11 homers and amassing 2.4 fWAR. Of course, Cespedes has already been a better hand for the Mets. Edwin Jackson helped the Cardinals win the World Series, but a 3.58 ERA in 78 innings isn’t the stuff of an all-time great acquisition. Beltran was also on the move in 2011, and while his seven homer, .323/.369/.551 campaign with the Giants was solid, he played in just 44 games and wasn’t the game-changer San Francisco expected. Michael Bourn, Doug Fister, Rafael Furcal, and Ubaldo Jimenez all also played well following their trade deadline moves, but not to the level of Cespedes.

The 2013 trade deadline sucked. Scott Feldman, Matt Garza, Ian Kennedy, Bud Norris, Ricky Nolasco, and Jake Peavy were the biggest names moved. Nolasco was the only one with an ERA under 4.00 after being traded. 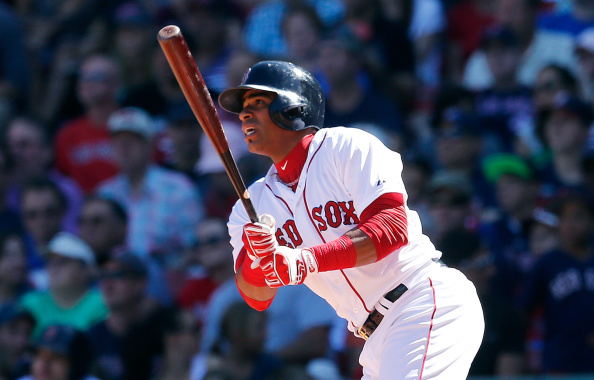 BOSTON, MA – SEPTEMBER 7: Yoenis Cespedes #52 of the Boston Red Sox watches the flight of his ball against the Toronto Blue Jays in the third inning at Fenway Park on September 7, 2014 in Boston, Massachusetts. (Photo by Jim Rogash/Getty Images)

However, the 2014 deadline was bonkers. Cespedes was flipped for Jon Lester. Jason Hammel and Jeff Samardzija joined Lester in Oakland. Brandon McCarthy went to the Yankees and rediscovered himself, as did Chase Headley and Martin Prado. Peavy was on the move again, this time going to the Giants. David Price was dealt for the first of two straight years, joining the Tigers.

Imagine that – Chase Headley is at the top of the heap thanks to his superb defense at third.

That brings us to 2015. Cespedes is obviously smashing the hell out of the National League. Mark Trumbo has hit 12 homers in 80 games with the Mariners, but Welington Castillo has actually outplayed him, homering 17 times in 68 games with the Diamondbacks. Scott Kazmir has a 3.06 ERA in ten starts for the Astros, while Carlos Gomez has hit .234/.282/.379 with four homers and seven steals in 38 games with Houston.

After digesting all that, you can clearly see just how much of an impact Cespedes has had on the Mets. He’s been so good for New York this season, and while he’s not the sole reason the club is coasting to the playoffs, he’s a pretty major part of their success.