Last year, the Texas Rangers kind of surprised everyone by winning the AL West. It wasn’t a commanding victory, however. Their 88-74 record was the worst mark among the six division winners in baseball. But a win is a win and 2015 was a very successful season for Texas, regardless of what happened in the playoffs.

One might have expected the Rangers to go out and sign some free agents or make some trades to improve the club. Instead, Texas did next to nothing, only signing SS Ian Desmond to play out of position and bringing in solid but unspectacular reliever Tom Wilhelmsen. Clearly, the Rangers are hoping for significant contributions from their MLB-ready prospects and bounce-backs from injured players. Will it be enough? 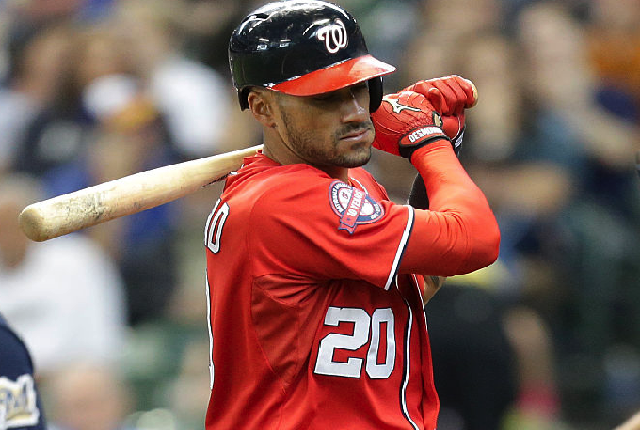 MILWAUKEE, WI – JUNE 13: Ian Desmond #20 of the Washington Nationals walks to the dugout after striking out in the second inning against the Milwaukee Brewers at Miller Park on June 13, 2015 in Milwaukee, Wisconsin. (Photo by Mike McGinnis/Getty Images)

Position Battles: The left field situation is a bit murky right now. Josh Hamilton injured his knee and is expected to be out for six to eight weeks. The Rangers signed free agent shortstop Ian Desmond to help out. We saw how poorly that kind of transition worked out for Hanley Ramirez and the Red Sox last year. Desmond is a better defender than Ramirez, but we can probably expect some hiccups. If it becomes clear Desmond cannot handle left field well enough, the Rangers do have a number of upper-level prospects to choose from including Joey Gallo, Jurickson Profar, Nomar Mazara, and Lewis Brinson. To open the season, only Gallo and Profar would be in play. But once we pass the Super Two deadline, the others could become options.

Elvis Andrus may not have as strong a hold on shortstop as he once did. Once his calling card was speed and defense, but his abilities in both areas have declined in recent years. He still stole 27 and 25 bases in the last two seasons, but that’s a far cry from the 40+ SB threat he once was. What’s more concerning is his defense. He was once considered above-average to potentially elite with the glove. But the last two seasons saw him log negative value by DRS and UZR. Desmond isn’t exactly an adept fielder anymore either, but even he was rated better overall in the last two seasons. It will be interesting to see what happens if Desmond looks like he can’t play left field, while Andrus continues to decline. Profar might still be an option at short, though injuries and lack of playing time in recent years probably makes that a less likely possibility.

Until very recently, it appeared as though Chi Chi Gonzalez could be penciled in as the Rangers’ fifth starter. But on March 1, Texas re-signed Nick Martinez. Now it appears as though the two could battle it out for that last spot. The two had similar peripherals—low strikeout rate, high walk rate—but Gonzalez has the higher ceiling. Last season was his first exposure to major league hitting, so it was no surprise he struggled some. However, Gonzalez also still has minor league options remaining, meaning he’ll have to work hard to push Martinez to the bullpen. 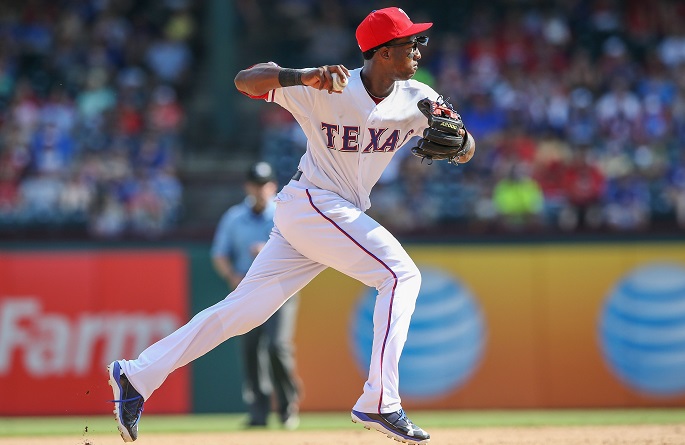 Injury Concerns: Josh Hamilton isn’t the only injured player the Rangers are hoping can bounce back. Formerly the best prospect in all of baseball, Jurickson Profar is looking to put injuries behind him and prove he’s still just as good as everyone hoped. Shoulders are scary and Profar’s has been a huge problem for him, causing him to miss all of 2014 and most of 2015. He did return to the minors late last season and played in the Arizona Fall League—but only has a DH. Profar showed he can still hit, but how well he can throw is the real question.

Yu Darvish should return at some point this season. He had Tommy John surgery almost exactly 12 months ago. That seems to be the minimum required rehab time for the procedure. But the Rangers will probably want to take things slowly with their ace pitcher. But at this point, a mid-season return seems likely. How well he’ll pitch is anyone’s guess, though. Command often takes much longer to return.

That’s it for injury concerns and—oh, that’s right. I forgot about the rest of the rotation. Martin Perez has dealt with his fair share of injuries, including his own TJ procedure in 2014. He returned last year and pitched in 14 starts. So hopefully, he’ll get through a whole season healthy for the first time since reaching the majors in 2012.

Derek Holland seems to be constantly injured. He hasn’t had a healthy season since 2013, when he made 33 starts and threw 213 innings. In the following two seasons, the left-hander has accumulated 95 innings at the major league level, including 58 last year. Is this the year he’s finally healthy again?

Mitch Moreland recently revealed he’d been playing with a broken foot the final two months of last season. He says it’s not a concern anymore, but it’s worth mentioning. 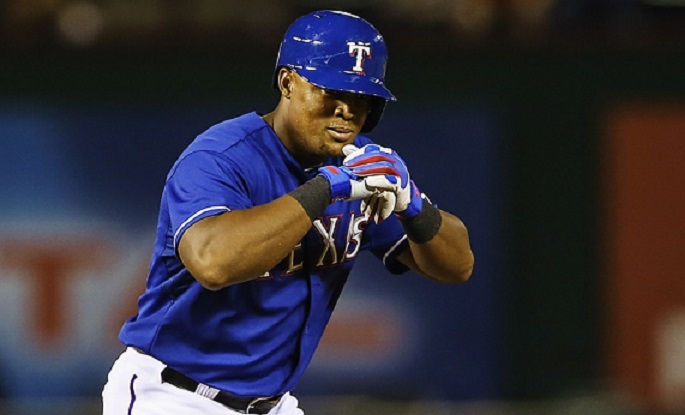 Key Player: If someday Adrian Beltre doesn’t get put in the Hall of Fame, we should just tear the whole thing down. The man has been playing third base for 18 seasons and only once was he not above-average (2.0 fWAR). He was 36 last year and still put up a 4.6 fWAR season. That’s incredible. What might be even more impressive is that he’s not just providing value with his bat. He’s still an elite defensive option at the hot corner, logging 18 DRS and 11.8 UZR last year.

Being able to count on Beltre this year will be very important for the Rangers. It means they can shift Joey Gallo around as needed. He could play left field—which we’ve already established is a little unsettled. He could also be an option at first base if Moreland experiences anymore trouble with his foot. 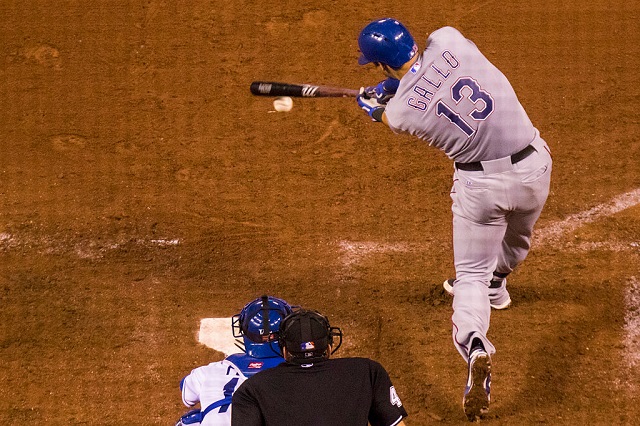 KANSAS CITY, MO – JUNE 05: Joey Gallo #13 of the Texas Rangers connects on a pitch from Luke Hochevar #44 of the Kansas City Royals in the eighth inning at Kauffman Stadium on June 5, 2015 in Kansas City, Missouri. (Photo by Kyle Rivas/Getty Images)

Underrated Asset: The major league team as it’s constructed today is decent, if not incredibly strong. But if Texas has a secret weapon, it’s prospect depth. Gallo is the most MLB-ready, having already appeared in 36 games with 123 plate appearances to his name. He likely starts the season in AAA, where he only has 228 PA. But as soon as he’s ready, the Rangers will be able to add legitimate 40-home run potential to their lineup.

Nomar Mazara and Lewis Brinson are two of the premiere outfielders in all the minors. Like Gallo, they’re slated to open the season in AAA. Also like Gallo, they could be ready for their call up by mid-season. The Rangers outfield looks reasonably set right now—except for left field. But should anything happen—injury or lack of production—any of these three players would make for a wonderful substitution. Even without something bad happening, any of the three could make it hard for the Rangers not to call them up in the middle of a playoff hunt. 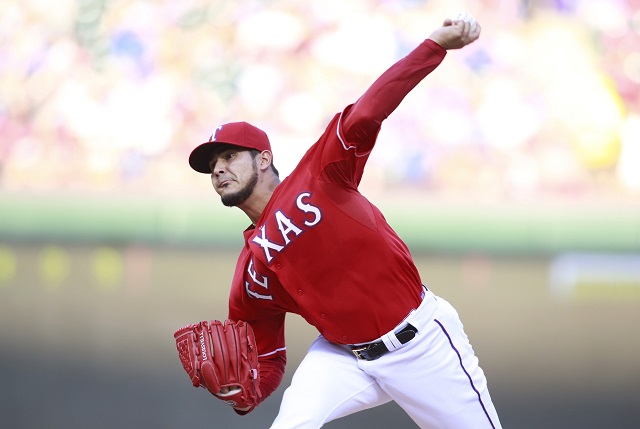 Burning Question: How stable will the rotation be?

There are pretty serious injury concerns with Perez and Holland. Each should enter the season healthy, but no one can say for sure how long that will last. Obviously, the hope is their health isn’t an issue at all. But should they miss significant time as they have in recent seasons, who replaces them?

Darvish will be an option at some point. But he has his own injury concerns. Their top pitching prospect near the majors will be Chi Chi Gonzalez. Coming up through the minors, it was thought he could be a front-line, No. 2 caliber starter. Recent production suggests that may no longer be the case. His minor league strikeout rate was never great, but last year in AAA, he had a 14.9 K% and at the MLB level a 10.7 K%. Neither is something a pitcher can get away with in the majors, so Gonzalez either has to improve quite a bit or the Rangers will have to consider moving him to the bullpen.

Next in line for starts is Anthony Ranaudo. He’s had more experience at AAA than Gonzalez, but he’s also had less success in recent years. In 39 major league innings with the Red Sox in 2014 he pitched to a 4.81 ERA and 6.89 FIP. Last year in 118 innings with the Rangers’ AAA club, Ranaudo had a 4.58 ERA and 4.89 FIP. He was even worse in a small sample size (15 innings) with the MLB club. He has two solid pitches in his fastball and curveball. But his changeup and command lag far behind. Ranaudo’s best fit may be in the bullpen.

If the Rangers’ rotation can hold out until Yu Darvish returns, they should be fine. And while Gonzalez and Ranaudo are solid minor league depth, the Rangers probably want to avoid giving them significant innings. Because if they have to, it means the top of the rotation is falling apart. 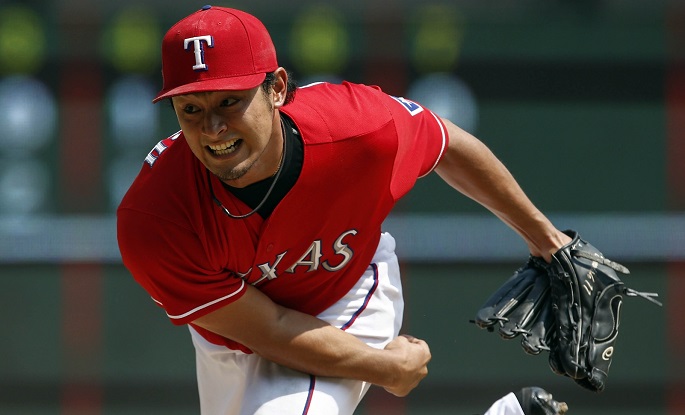 Best Case Scenario: Ian Desmond transitions seamlessly to left field. The young outfielders in AAA make it hard for the Rangers to find playing time for everyone. Adrian Beltre Adrian Beltres. Yu Darvish returns without setback, even if only at 80% of past Yu Darvish. The rest of the rotation remains reasonably healthy, combining to at least match, if not better, their 88 wins from last year. That should be enough to remain in contention for the division title all year, with a wild card spot a fallback option.

Worst Case Scenario: Desmond follows the Hanley Ramirez guide to former shortstops learning left field. The young outfielders need more polish at AAA. The rotation acts as fragile as it looks. In a reasonably competitive division, the Rangers fight with the Angels for fifth place.

Realistic Prediction: I lean closer to that best-case scenario. I think Beltre, Fielder, Choo, Odor, and Hamels will be solid contributors, with perhaps a few All-Stars. I also think Darvish will be a nice boost once he’s ready to return. Gallo, Mazara, and Brinson are MLB- or near MLB-ready players who most clubs would be ecstatic to have as their top prospects. Each could provide a significant impact to the Rangers’ win potential. I think all things considered, the Rangers are as strong as any other club in their division with the Astros as their chief competition. It’s a good time to be a baseball fan in Texas!