Here’s a full roundup of all the stupid things that transpired on divisional playoff weekend in the NFL:

Cowboys head coach Jason Garrett deserves a ton of credit for gambling on 4th-and-6 against the Lions on wild-card weekend and on 4th-and-2 late Sunday against Green Bay, but I don’t understand his decision to settle for a field goal attempt on a 4th-and-1 from the Packers’ 27-yard line with 34 seconds remaining in in the first half of that same game. The Dallas offense had been buzzing down the field at a crisp rate and still had a timeout in its back pocket with a four-point lead. A first down there could have at least got them closer with a chance to take a two-score lead heading into halftime, but Garrett settled.

Making matters worse, they took a false start penalty and then Dan Bailey missed from 50 yards. I thought he should have gone for it in both spots. The failed kick, which shouldn’t have been too surprising from that distance, gave Green Bay lots of time and primo field position in order to set up a last-second field goal. It was a six-point swing that might have ultimately cost Dallas the game.

One play prior, Dallas had a 3rd-and-1. And despite the fact DeMarco Murray was running well for one of the best rushing offenses in football, quarterback Tony Romo was in shotgun. Incomplete pass. That whole sequence was handled terribly. And again, it was a potential game-changer.

I watched Sunday’s Dallas-Green Bay game with my girlfriend, who is extremely unfamiliar with football and thus the perfect sample for a reaction to the Dez Bryant non-catch that has the football world abuzz. Most of us can agree that the officials made the right call, but almost nobody will try to claim the rules regarding what constitute a catch make any logical sense.

That really hit home for me when my girlfriend quite literally didn’t understand how in the world that wasn’t a catch, no matter how many times I tried to explain it. “He caught the ball. Look! He caught it! I don’t understand how anyone doesn’t see that.”

“If you asked 30 Helens who just happened to be football fans whether Bryant’s amazing play was a catch,” wrote Grantland’s Bill Barnwell. “I suspect most of them would agree.” And that’s the key.

“It looked like a catch to the average, reasonable football coach, player, fan, etc.,” wrote Pro Football Talk’s Mike Florio. “That’s the real issue; it looked like a catch, and then we were told it wasn’t a catch. The challenge for the NFL as to this and every other rule becomes ensuring that the rules mesh with the commonsensical expectations of folks playing, coaching, and/or watching the game.”

Sadly, based on win probability numbers from Advanced NFL Analytics, there’s a good chance that rule gave the Packers a win and the Cowboys a loss on Sunday. That’s a tremendous shame, especially because there’s a good chance the rule will be altered in the offseason. That’s a must, because we’re getting to a point at which the league’s over-complicated rulebook could be impacting who does and doesn’t win championships.

I know this is easy to say with hindsight, and I admit I probably wouldn’t be saying it if the catch rules were different and Bryant was credited with the reception, but let’s be real: a fade down the sideline on 4th-and-2 wasn’t the most logical decision on behalf of the Cowboys.

Plus, Romo did appear to have safer options in Cole Beasley and DeMarco Murray: 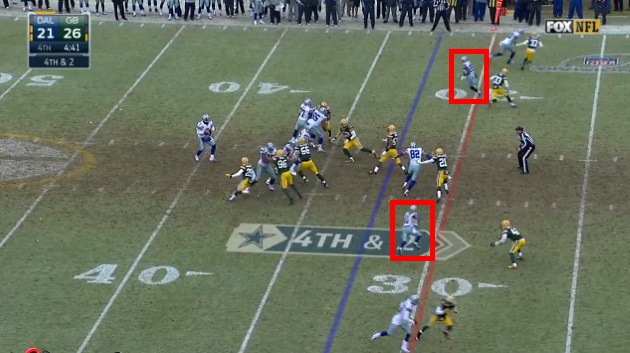 With the season on the line and against a defense that had been playing fantastic, Peyton Manning threw a three-yard route to C.J. Anderson on 4th-and-8. There was very little pressure from the Indy D, but Manning panicked and made a low-percentage play, rather than waiting to discover Emmanuel Sanders breaking open in first-down territory. 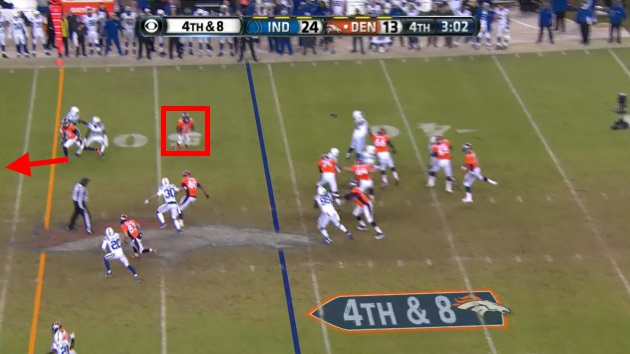 Two plays earlier, Manning did this…

Everyone who thought the NFL was conspiring in favor of the Cowboys.