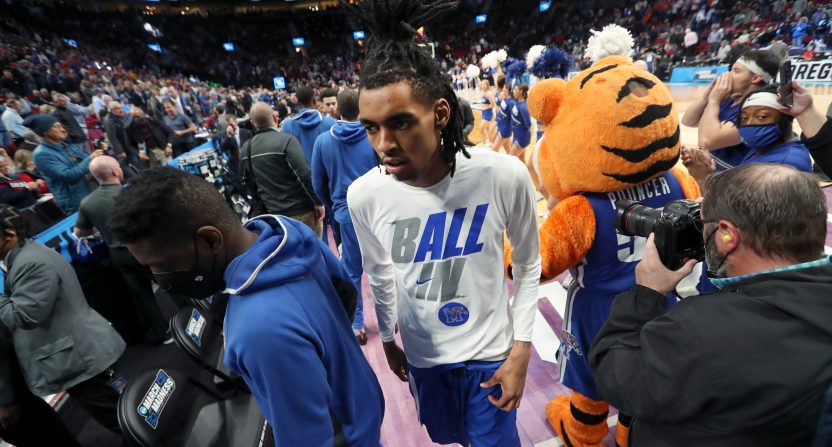 Mercurial college basketball star Emoni Bates has had a roller coaster of a career. From being the top recruit in the country to an up-and-down freshman season at Memphis in which he only played 18 games while fighting injury, Bates’ career has been a tale of stops and starts.

Bates transferred to Eastern Michigan in his hometown of Ypsilanti to continue his college career after his lone season with the Tigers.

However, things took yet another turn Sunday night as Bates was arrested in Superior Township, Michigan and charged with carrying a concealed weapon and “altering ID marks” on a firearm after police found a gun in his car during a traffic stop. Bates’ lawyer, Steve Haney, entered a plea of not guilty on his behalf at the arraignment on Monday. Both charges are classed as felonies.

Emoni Bates was arrested Sunday night in Michigan, after sheriff's deputies found a firearm in a vehicle he was driving. He will be charged with carrying a concealed weapon.

Bates' lawyer said he borrowed someone's car and a gun was located in the car. https://t.co/dNMSGATcJD

The college basketball world reacted across social media about the newest chapter in the tale of Bates’ college career.

This Emoni Bates news is beyond sad. It's heartbreaking. What's also problematic here is all the adults & corporate entities like @espn's Paul Biancardi & Adam Finklestein who helped create an ecosystem of entitlement around the kid & gave him a false sense of NBA future glory

Emoni Bates was arraigned today and his attorney asked a not guilty plea be entered on his behalf, per Bates’ attorney, Steve Haney. The judge agreed to a non-monetary personal recognizance bond for Emoni to be immediately released from jail. Next court date set for October 6.

I’m not judging Emoni Bates. We don’t know what’s going on in that kids life where maybe he felt like he needed a gun for protection. I just hope he gets it together and sees his potential through.

Emoni Bates’ attorney, Steve Haney told AP the vehicle and gun didn’t belong to Bates. “I hope people can reserve judgment and understand there’s a presumption of innocence. This was not his vehicle. This was not his gun. … We’re still gathering facts, too.”

Eastern Michigan University released the following statement in regards to the situation:

“We are aware of a situation involving men’s basketball student-athlete Emoni Bates. Eastern Michigan University takes all allegations of this nature very seriously. Per department policy, he has been suspended automatically from practice and playing privileges until the legal process is resolved. Because this is an on-going legal matter, the University will have no further comment at this time.”

Mike Abelson is an editor for Comeback Media. He also works as a writer and broadcaster for numerous organizations throughout New England. You can follow his journey to see a basketball game at every New England college at throughthecurtain.blog.