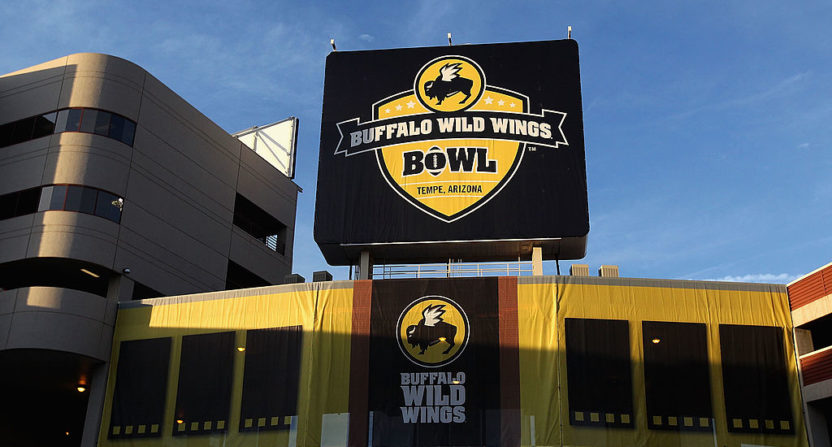 Let’s add something else to the neverending list of things that millennials are apparently killing – bad chain restaurants!

Business Insider is reporting that casual chain restaurants that produce terrible dining experiences are struggling because of those damn millennials, who refuse to waste their money on the vat-sourced junk they call food.

In a recent letter to her company’s shareholders, Buffalo Wild Wings CEO Sally Smith blamed the damn millennials for wanting to eat quickly, wanting to cook at home, and wanting their food delivered, all perfectly reasonable things.

“Millennial consumers are more attracted than their elders to cooking at home, ordering delivery from restaurants and eating quickly, in fast-casual or quick-serve restaurants,” Smith wrote.

Some of the garbage restaurants are attempting to get in on the delivery portion of this, but how many of these awful millennials are really going to order a burger from TGI Fridays when they can just get one delivered from a local place, or buy the ingredients to make a better, cheaper burger on their own?

Cheesecake Factory announced earlier this year it is expanding delivery to half of its 194 US locations through DoorDash, a third party delivery service. T.G.I. Fridays, Chili’s, and Maggiano’s are all now on Grubhub, and Buffalo Wild Wings and Red Robin are testing the service. Outback Steakhouse is using both third-party services and building its own delivery service.

Fast casual restaurants are also being blamed, because it’s apparently a damn shame that millennials don’t want to sit around for an hour, pay $7 for a beer, and wait for their mediocre food at chain restaurants.

The growth of fast-casual chains such as Chipotle and Panera have been especially harmful. These chains manage to bring both convenience and lower prices to millennial customers, who are less enthused about spending more money just for the “experience” of sitting in a booth at a casual dining joint.

Then there’s this – the presumption that millennials aren’t going to chain restaurants because they’re not *cool* enough.

“When you look at the alternatives out there in the marketplace today and who’s creating buzz and creating excitement, it’s gone away from chain casual dining,” John Antioco, TGI Fridays CEO who is attempting to rebrand the chain as a gastropub, told Business Insider.

I don’t think John Antioco knows what a gastropub is. TGI Fridays will never be a damn gastropub.

The fact of the matter is this – chain restaurants need to be better. I have no issue paying $12 for a burger and $7 for a beer, but if the burger sucks and the beer is swill, I won’t be making a habit of that. If the beer is awesome and the burger is delicious, you’ll see me there a lot more – and most chain restaurants can’t check off both of those boxes. It’s really that simple.