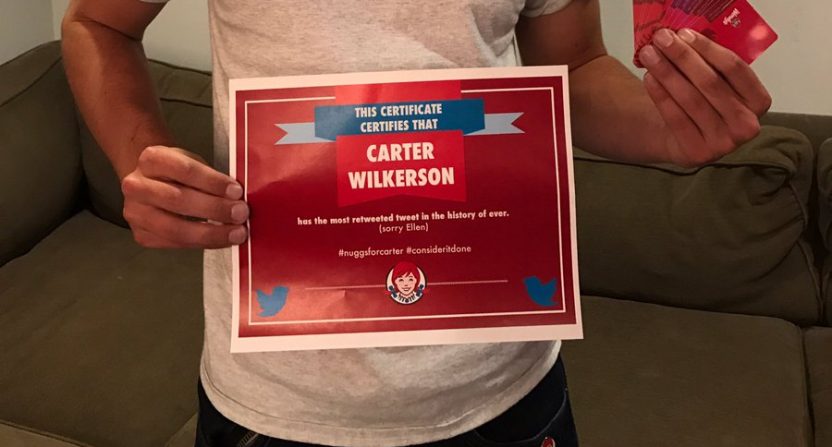 Carter Wilkerson simply had a craving for some Wendy’s chicken nuggets when he reached out to the fast food chain and asked how many retweets it would take to get a year’s supply of nuggets. Wendy’s set the bar at 18 million, and though Carter fell roughly 14.5 million retweets shy of that lofty goal, but Wendy’s is now set to honor the deal.

.@carterjwm is now the most retweeted tweet of all-time. That’s good for the nuggets, and $100k to @DTFA. Consider it done. #nuggsforcarter pic.twitter.com/k6uhsJiP4E

HELP ME PLEASE. A MAN NEEDS HIS NUGGS pic.twitter.com/4SrfHmEMo3

Wendy’s made the decision after Guinness World Records recognized Wilkerson’s retweet request as being the new world record holder for the most retweeted tweet ever on Twitter. That bumped Ellen DeGeneres at the Oscars down to No. 2.

Hey @TheEllenShow sorry about that… Can I still keep my TV and Underwear??

The social medai campaign to join Carter’s dream of a year’s supply of chicken nuggets from Wendy’s grew to be about something more than just fried chicken in bite-size proportions. As the mission evolved, it eventually led to donations for the Dave Thomas Foundation, which will receive a healthy $100,000 donation from Wendy’s. And, in recognition of a job well done, Wendy’s awarded Carter with a certificate to recognize the most retweeted tweet and handed over some coupons good for a year’s supply of nuggets.

And just to make sure that was perfectly clear, Wendy’s confirmed the chicken nugget prize.

And yes, those nuggets will come with sauce.

And so it has happened. A random person on Twitter set out on a hopeless mission and will be awarded the object he so desires anyway. What a time to be alive.