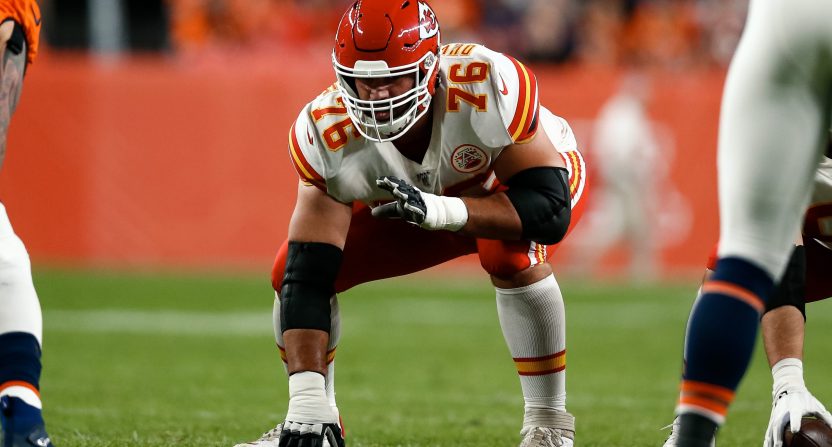 Quarantine is tough. But what if you could choose your fellow housemates during the COVID-19 pandemic? Would you choose wisely? You’ll need the right people: a group that will keep you healthy, entertained, well-fed, inspired, and comfortable.

Here are the five sports figures who best fit those requirements:

COVID-19 has turned us all into hypochondriacs. Every cough and sneeze fills us with dread. Wouldn’t it be nice to have a health-care professional on hand?

Forget WebMD. You have K.C. MD. Is there a doctor in the house? Yes, and it’s Duvernay-Tardif. The Kansas City offensive lineman is the only active NFL player who’s a medical doctor. The 29-year-old graduated from the prestigious McGill University Faculty of Medicine with a doctorate in medicine, and a master’s in surgery.

Duvernay-Tardif can quickly size up your symptoms and provide an accurate diagnosis. Heck, he might even have the medicine available, so you don’t have to order from a pharmacy. And if things get serious, he’s fully qualified to operate on you.

Plus, he’s 6-foot-5, 322 pounds. A person that size will help keep you protected in case society crumbles. Also, if you get bored, you can ask him about the Chiefs’ run to the Super Bowl. Can’t believe they were down double-digits in every game! Tell us more about how cool Patrick Mahomes is.

It looks like social distancing will last a while. You’ll need some entertainment. Who better to provide some amusing anecdotes than Griffin?

Griffin isn’t your typical athlete. He’s an aspiring comic who did an “internship” with Funny or Die during the 2011 NBA lockout. No joke. Griffin seems serious about a post-basketball career that differs from most.

Comedy is hard, especially stand-up. You try getting on stage with the heavy expectation of being funny. Even the best comedians occasionally bomb. Griffin said he’s more nervous at a comedy club with a few hundred people than at an NBA arena filled with 20,000. This is a win-win situation for Griffin, and you. He can test out his material in front of an audience of one – and you get to enjoy the perks of hanging out with an All-Star.

Even if Griffin’s non-sports jokes flat, he can always fall back on what he knows. He’s been in the NBA since 2009 when he was the No. 1 overall draft pick out of Oklahoma. The former slam dunk champion has accumulated some great stories about the baller lifestyle, including going to a strip club for the first time.

The man with the 100-mph fastball and the first athlete to be paid $1 million a season has a lot on his plate now. Literally.

One of the big quarantine challenges is food. You need access to safe sustenance, and going to the supermarket these days feels like Russian roulette. You’re trying to avoid people while wearing masks and gloves that make you look like a bank robber. Sure, you can get stuff delivered, but that has its own difficulties.

If you’re with Ryan, your problems may be solved. He’ll cut out the middleman. Ryan owns food and hospitality businesses, including Nolan Ryan Beef. Enjoy all the steaks you want. Do you like barbecue? He’s a Hall of Famer in that category too as the author of his own cookbook: The Nolan Ryan Beef & Barbecue Cookbook: Recipes from a Texas Kitchen. Slow-cooked barbecue ribs! Brisket! Sign me up, please. You might emerge from quarantine 30 pounds heavier, but you’ll also be so much happier.

You’re totally stressed out these days, and it’s easy to lose faith. That’s why it helps to have someone who project calmness and is a leader. You’re not going to do better than Dungy. He inspires. He got the best out of great athletes without screaming at them. Dungy understood that yelling isn’t coaching. It’s just yelling. He got his point across by talking calmly, but firmly with others. What a concept! Why can’t more coaches do the same?

Dungy understands adversity. This guy led the Big Ten in passing yards in 1975 at the University of Minnesota, but went undrafted and was never given a chance a shot as a fulltime NFL quarterback (he played safety). As a head coach, Dungy took the laughingstock Tampa Bay Buccaneers and turned them into a playoff team. Later, he coached the Indianapolis Colts to their lone Super Bowl.

This man gets things done. This man will have your back. He’ll follow proper quarantine procedure and never take unnecessary risks. And while you might not agree with some of his personal beliefs, one thing is clear. You’ll feel safe with Dungy.

If there’s one person best equipped to survive, it’s Brady. You don’t have two decades worth of unprecedented success in a brutal sport while sustaining only one major injury and looking that good without availing yourself to all possible resources. Last season was the first time we’ve seen any sort of regression, and much of that was probably due to his supporting cast.

Brady, 42, has withstood the ravages of time. According to the National Center for Biotechnology Information, muscle mass decreases approximately 3–8% per decade after the age of 30. And yet, Brady was the league MVP as recently as 2017, and won the Super Bowl a year ago. Is it because he has a “doctor” who’s not actually a doctor? Has his TB12 team discovered a fountain of youth that will give you a hairline that doesn’t recede, hair color that doesn’t change and, ahem, other special qualities.

By living with Brady, you’ll get direct access to whatever he’s doing. You won’t have to pay $48 for his plant-based protein, or $240 for a 90-minute session with one of his coaches. Here’s another bonus: you’ll stay with Tom in the 30,000-square foot waterfront Tampa mansion he’s renting from Derek Jeter. With seven bedrooms, nine bathrooms, this isn’t quarantine. You’re on vacation.