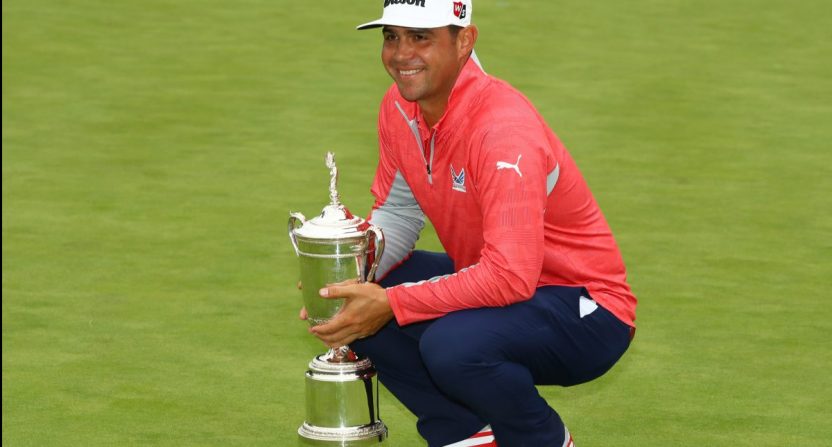 It was somewhat unexpected; not because Woodland isn’t clearly capable (heading into the week he was ranked 25th in the world, and having only missed one cut in the last calendar year), but because we just haven’t had a non-star win a major since Jimmy Walker at the 2016 PGA Championship. (Patrick Reed did win the 2018 Masters, of course, but he’s at least a brand. A very particular brand, yes, but definitely a brand.)

In fact, for most of the day, the narrative was whether or not Brooks Koepka could chase down Woodland to capture his third straight U.S. Open, a feat not accomplished since Willie Anderson did it from 1903-1905.

It would have also been Koepka’s fifth major since the 2017 U.S. Open, and his second consecutive major win. He had to settle for solo second, three shots behind Woodland, but when you factor in his T2 at the Masters behind Tiger, his last four major starts look like this: W/T2/W/2. It’s an incredible run, and it’s tough to bet against him heading to Royal Portrush for the Open next month.

Woodland didn’t let that happen, though, playing steady golf all Sunday, leading to a two-shot lead on the 18th tee. Laying up twice and wedging it on in regulation, he closed out the championship exactly how you’d like to do it:

WHAT A WAY TO FINISH!

That putt, though, came when the tournament was pretty much sealed up, with Woodland only needing a three-putt to close things out. That he did it in one is awesome, but it’s not what won him the championship. Nor did any one shot, of course. But let’s pick three excellent examples of shots that occurred while things were still very much up for grabs.

Pros absolutely hate finding their ball in a divot in the fairway. It’s often as much psychological as anything; they feel like they’ve been attacked by the world if they hit it in the fairway and aren’t rewarded with a perfect lie. Woodland found himself in a similar situation early in his round on Saturday, but rather than voice his anger in an offseason anonymous player poll, he simply executed a ridiculous approach anyway.

They're all chasing Gary Woodland, but he's not slowing down. #USOpen pic.twitter.com/xWWH0dttet

Putting a bit of draw spin on it is the real kicker. Woodland has been known throughout his career as a big hitter, but long and straight off the tee is only one part of the equation. Shots like that one to set up kick in birdies are rare at the U.S. Open; doing it from a lie that would have had Matt Kuchar calling for a third official in an effort to get relief was a sign that his mental game was just as prepared to win.

Woodland birdied both par 5s on the back side; you’ve already seen the putt he made on #18, but his birdie on #14 was even more impressive. Koepka had already had to scramble for a par, having missed the green left with a wedge after being forced to lay up. Woodland, sitting on a lead, decided to play to his length strength and attack the green in two, despite it playing a very uphill 263 yards, with trouble all around.

That set up a two-putt birdie, extending his lead and essentially putting his destiny into his own hands. An absolutely perfect swing, and while he was maybe slightly fortunate to carry it just far enough, he put himself in that position, and earned the reward.

Playing more than a hole behind Koepka (and essentially out of position, mostly thanks to Woodland’s playing partner Justin Rose ejecting in excruciatingly slow-motion throughout the final round), Woodland stepped to the 17th tee with a two-shot lead, knowing Koepka was likely only going to be able to make up one shot on his final hole, with an outside chance at an eagle.

That meant par-par was probably going to win, and would definitely force a playoff. Sometimes that can escalate pressure on a player, especially someone trying to get it done for the first time at a major, and it was on #17 that Woodland made perhaps his worst swing of the final round, blocking one way to the right, finding the incorrect portion of the hourglass green.

Gary Woodland has a bit of a long putt ahead on 17. #USOpen pic.twitter.com/gQI1MYluSA

It looked like Woodland was going to have to make a lengthy par putt at best; Koepka had a birdie putt upcoming on #18, too, which meant for a few seconds things felt as tight as they were going to. Then, Woodland did this:

Gary Woodland nearly holed the chip from ON THE GREEN! #USOpen pic.twitter.com/IWGxmVouf4

That’s an astounding play, all things considered. Chipping off as tight a lie as you can find, with the U.S. Open in the balance, and almost holing it? Come on. Koepka would go on to miss his birdie on #18, Woodland would knock that in, and that was pretty much that.

Woodland could never win again and this week still wouldn’t be a fluke. He was clearly the best player on a challenging (if not traditionally so) U.S. Open setup, three shots clear of second, six (!) shots clear of third, and doing it with every aspect of his game.

That’s impressive enough for some of you, but if you want an off-course story as well: Woodland was the defending champion in Phoenix earlier this year, when he surprised Special Olympics golfer Amy Bockerstette by playing the famous #16 hole with her in the very best kind of viral moment.

It gets better, as they’ve stayed in contact since. Amy wished Gary well last night:

And then celebrated his win:

And then Woodland spent some time talking to Amy from the press room after his win, too:

And here’s the other side of that phone call, from Amy’s perspective (courtesy: @mrstesori)… pic.twitter.com/Fq8jtz3BKq

It’s hard to feel anything but happy that Woodland won. He deserved it on the course, and it seems like he really deserves it off the course too. A competitive tournament on a scenic, fair course that gave us a deserving champion. Hard to ask for more than that from a U.S. Open.