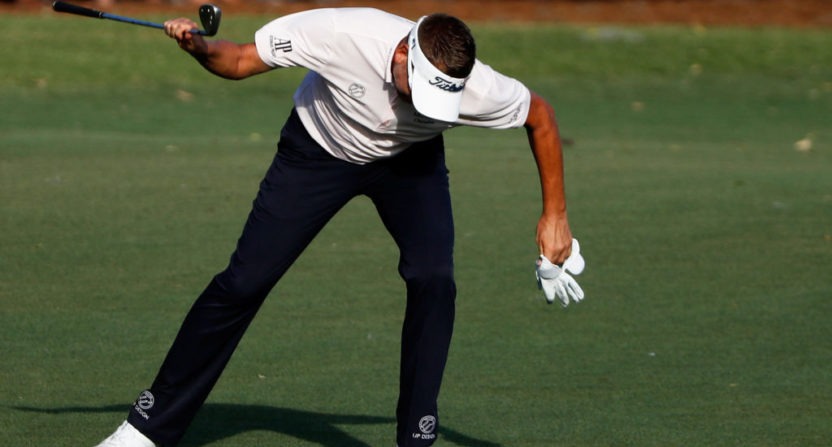 Golf Channel analyst Brandel Chamblee has been known for harsh criticisms of players at times, but he got as good as he gave Sunday. Chamblee went after English golfer Ian Poulter following Poulter’s final-round 71 (including a bogey on 18, seen above) in The Players’ Championship, which left him in a tie for second with Louis Oosthuizen and three behind 21-year-old winner Si Woon Kim. That caused Chamblee to say “he clearly did not play to win” and lots else on-air, which was then tweeted out by Chamblee’s colleague Ryan Lavner and commented on by Poulter:

Brandel, on the way Poults played down the stretch: "He clearly did not play to win, and he didn't!"

Sorry to disappoint, I can only dream of being as good as Brandel.. it's clearly very easy sitting on your arse… thanks for the support. https://t.co/hK8rs8NcXW

Here are the full comments from Chamblee, via Golf.com’s Josh Berhow:

Chamblee, speaking on Golf Channel’s “Live from the Players” Sunday night, took issue with how Poulter played some of the closing holes.

Chamblee first criticized the wedge Poulter hit into the par-5 16th, calling it “the worst shot of the day,” before he discussed Poulter’s approach on the par-3 17th island green, which had its pin tucked in the front right. Poulter played a safe shot to the middle of the green.

“Look where he’s lining up (on 17),” Chamblee said. “He’s lining up in the middle of the green. The person he is trying to beat is playing a par-5 behind him, and he’s got two shots to make up, and he plays to the middle of the green. It’s a fine shot, didn’t cost himself any money, didn’t cost him any world ranking points, but he clearly did not play to win—and he didn’t.

“Money matters, world ranking points matter, and I get it,” Chamblee said. “I have hit that shot. I have done that. I have done exactly what Ian Poulter did. No one is ever going to call me a good player. We reserve the right to call great players and great shots. This is why we don’t laud (Poulter’s shot). We laud the shot David Duval hit, the shots that Tiger Woods hit. That’s why we laud those, that’s why we stand up and go ‘Well done, great shot.’ (Poulter’s shot), was not that.”

…”If his belief in himself was greater than his talent, than he would have stabbed that in there at 16 and taken on the pin at 17,” Chamblee said.

Both sides have some points here. Poulter’s right that Chamblee isn’t as good of a golfer as he is, and that it’s easier to criticize from the sidelines than actually make the decisions or hit the shots, but it is Chamblee’s job to give honest analysis, and that shouldn’t always be positive. If he disagrees with Poulter’s strategy, he should express that, and he did. That doesn’t mean Chamblee’s necessarily right here, or that his approach would have worked out better (in fact, it might have ended way worse), or that there’s anything necessarily wrong with playing for second (if that is in fact what Poulter was doing; perhaps he was just being conservative to be in position in case Kim dropped some shots on the closing holes).

But Poulter isn’t entirely right, either. Chamblee doesn’t need to be as good as Poulter is in order to criticize him, and his criticisms aren’t invalid just for coming from the sidelines. This did get weirder (and more in Poulter’s favor) afterwards, though, with Chamblee apparently blocking Poulter on Twitter:

Regardless of who you agree with in the initial dust-up, an analyst blocking someone they analyze seems pretty dumb.