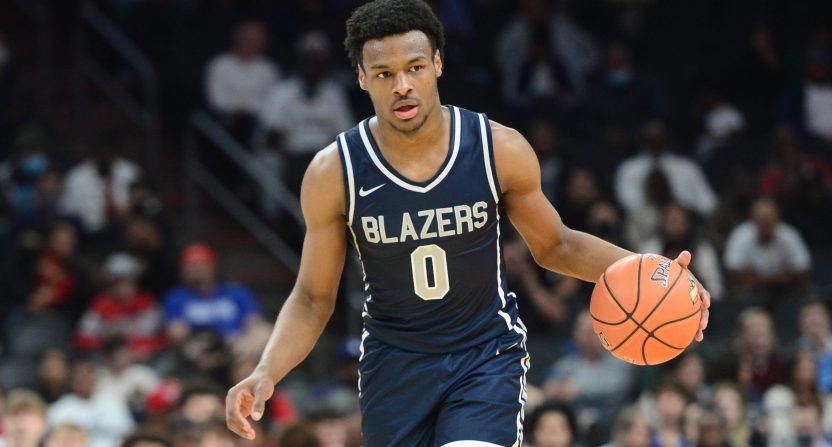 It is never easy to follow in the shoes of a legendary father, especially in the same sport, but that is exactly what Bronny James, the oldest son of LeBron James, is trying to do.

Bronny is currently the No. 38 ranked high school player in the 2023 recruiting class, according to On3, and there has been growing speculation as to where James will play basketball in college.

According to a previous report from On3 on Wednesday, a number of schools are actively recruiting Bronny, including Oregon, USC, and Ohio State, with the Ducks reportedly being the frontrunners at this point.

Odds have emerged regarding James’s recruitment via BetOnline, and they surprisingly have a school listed as the favorite that was not previously reported.

According to BetOnline via Arash Markazi, UCLA is listed as the favorite to land Bronny at only +100 odds, shortly followed by Oregon and then North Carolina.

What college will Bronny James commit to?

These odds have Ohio State, the school that LeBron said he would have gone to if he ended up going to college, as a +1400 long shot to land Bronny.

A number of schools that were not previously listed to be interested in James that have odds to land him are Kentucky, Duke, Michigan State, Kansas, and Michigan.

It definitely makes sense for UCLA to be listed considering LeBron recently agreed to a two-year contract extension with the Los Angeles Lakers that will keep him in Los Angeles through the 2024-25 season.

LeBron has also expressed interest in playing with Bronny once he is eligible to enter the NBA Draft, which is likely why LeBron decided to put a player option in his contract for the 2023-24 offseason.

There is definitely a long way to go in the recruitment of Bronny, but it would be very surprising to see him go too far from Los Angeles. The odds certainly reflect that.