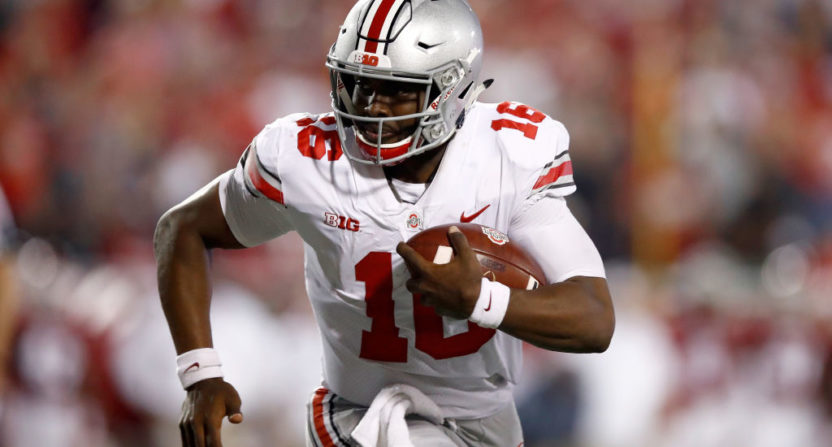 The Canadian Football League has a feature called a “negotiation list,” where teams can claim exclusive CFL rights for up to 45 players not currently in the league if they ever want to go there. (This is American, or “international” players; Canadian, or “national” players enter the league through a draft, as do the new category of “global” players.) Those lists have long been mostly secret, but there’s always been some reporting on who’s on them, and the league itself recently required teams to reveal 10 of the 45 players on their lists twice a year. Many of the players on those lists are high-profile NCAA quarterbacks who are unlikely to ever actually play in the CFL, but occasionally, a listing pays off, and sometimes even long after the fact. And that’s what just happened with the Edmonton Elks’ signing of former Ohio State quarterback J.T. Barrett, who was first added to their list in November 2014 back when he was a freshman:

It’s unclear if Barrett was on the Elks’ list continuously for all that span, but it’s certainly possible. These lists are big enough to encourage teams to take some unlikely gambles, especially for quarterbacks. And while Barrett did well during his Ohio State career from 2014-17 and holds a number of school records there, he didn’t do so well that he was a NFL lock; he went undrafted in 2018, spent time on the New Orleans Saints’ practice squad that year, then had a short stint with Seattle in 2019, another Saints’ stint later that year, and an offseason stint with the Pittsburgh Steelers from 2019-20. He then played in The Spring League in the fall of 2020 (in a season shifted by that spring’s COVID outbreak), but hasn’t played professionally since then. And now, he’s turning to Canada.

What’s particularly interesting is that the man who put Barrett on that initial list (or, at the least, had a notable role on the team that placed him on that list) is now in Edmonton again, and has had an even wilder journey to this point. That would be Chris Jones. As J.C. Abbott of 3 Down Nation noted, Jones has had quite the list of jobs since then:

God I love the ridiculousness of CFL football ops.

Chris Jones was there to neg list Barrett, then had time to win a Grey Cup, bolt for Saskatchewan, bolt for Cleveland, coach a Tennessee high school, make a surprise return to Toronto, and still get rehired in time to sign him. https://t.co/cRUtk58Gs5

Indeed. Jones was Edmonton’s head coach from 2014-15 (the franchise was known as the Eskimos then; they changed to the Elks last year), but left for a head coach and general manager role in Saskatchewan a week after winning the Grey Cup in 2015. (Of course, long-time CFL figure Ed Hervey was the general manager in Edmonton from 2013-16; it’s unclear which of Jones or Hervey played a larger role in listing Barrett then, but it is notable that Jones has often had significant personnel involvement even when only listed as head coach or assistant coach, so it’s certainly plausible he was at least in the conversations about listing Barrett.) Jones then left Saskatchewan abruptly in 2019 for a role as a “senior defensive specialist” with the NFL’s Cleveland Browns, then took what he described as his “dream job” as the head coach of his alma mater of South Pittsburg High School in Tennessee last spring, only to then leave that school suddenly in September to sign on as a defensive consultant with the CFL’s Toronto Argonauts. He then returned to Edmonton in December, as both head coach and general manager this time.

It’s sort of fascinating to see a negotiation list move made so long ago actually come to fruition. This does happen from time to time, but it’s relatively rare; most people on those lists never come to the CFL, and most of the discussion about them is just hypotheticals (as it was with Tim Tebow, where Montreal Alouettes’ GM Jim Popp said in 2013 they’d never talked to Tebow or his representatives, but just had him on that list in case he did decide to explore playing in the CFL). And what’s even more rare is for a negotiation list move made under one head coach to come back with that same head coach seven-plus years later, and with that coach having so many stops in between. It will certainly be interesting to see how Barrett does in the CFL; he joins a current quarterback roster of Nick Arbuckle, Taylor Cornelius, Dakota Prukop, Khalil Tate, and Kai Locksley. We’ll see if he’s able to make the team, but Jones’ long interest in him certainly shouldn’t hurt.

[3 Down Nation/Eleven Warriors; 2017 photo of Barrett at top from Andy Lyons/Getty Images]