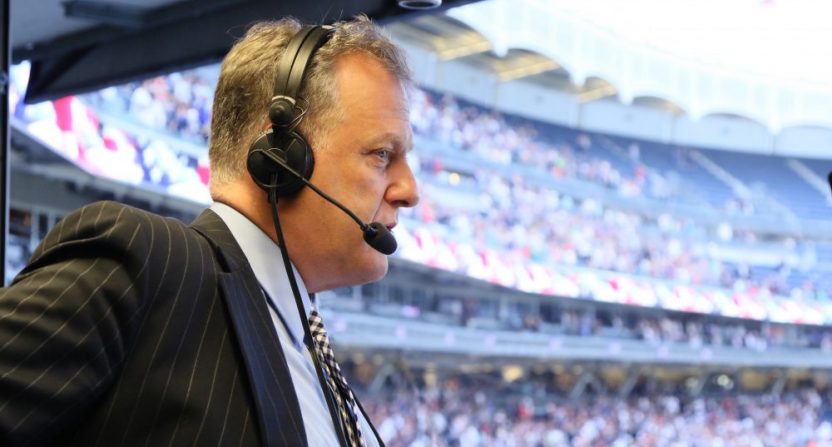 On a peaceful Sunday morning in the Bronx, Michael Kay sat in the New York Yankees’ home broadcast booth preparing to call the team’s 1:05 game against Toronto for the YES Network, where Kay has been the play by play voice since the network launched in 2002. Kay was wearing a blueish-gray jacket he’d need on this abnormally overcast and cool day in mid-August, with a breeze that evoked thoughts of the fall months to come.

Had this been a normal weekday, Kay would’ve been preparing for his weekday drive-time radio show on ESPN’s New York affiliate 98.7 FM, which he’s hosted since 2002. YES came aboard to simulcast the show in 2014. But since he was off from that responsibility, Kay, 57, had time to sit down with Awful Announcing to discuss his two high profile jobs in the country’s largest media market, battles and opportunities in his career, and how having a family has altered his career equation.

On a normal summer day when the Yankees are at home, Kay wakes up at seven and drives his five-year-old daughter and three-year-old son to camp, and then gets home to prepare for The Michael Kay Show, which starts at 3, and the Yankees telecast, starting at 6:30. Kay usually gets to the ballpark at 2, and arrives at a very unglamorous setting: a double-stacked trailer at the Yankee Stadium loading dock, where he broadcasts the radio show on days like this.

The space can fit two of the three members of the show, along with the television cameras, with Don La Greca often accompanying Kay in the Bronx and Peter Rosenberg at ESPN’s radio studio in Manhattan.

“The only time you hear anything in the loading dock is when there’s a truck backing up and you have that loud beep,” Kay said. “I hear it, but I don’t think it comes across on the air. Nobody’s ever said it came across on the air.”

Kay, La Greca, and Rosenberg go on the air at 2:55, but things are challenging and hectic for Kay throughout the day, as he tries to prepare for the Yankees game during TMKS’ nine-minute long block of commercials in between segments.

“The producer for TV will come up, he knows when the commercial is, and we’ll go over what the open is and things like that,” Kay said. “I wouldn’t say it’s easy, but we have it down.”

A more difficult and thorny issue for Kay than juggling his jobs is the intersection of sports and politics on drive-time radio. Kay said he’ll never give his political thoughts and opinions on the air, “but the National Anthem stuff, I’m sorry, the lines cross,” he said. “Everybody’s just ‘stick to sports,’ but when our president doesn’t stick to politics and goes to sports, it kind of crosses the line. So you have to address it.”

Whenever the National Anthem issue comes up, and it’ll persist during the NFL season as long as players are protesting and the president keeps tweeting, Kay said “the phone calls light up. And then it becomes very political, and you have to pull that back a little bit.”

The cycle continues on Twitter, Kay said, when people respond by saying they just want to talk about sports.

“We are talking about sports. This is sports,” he said. “This is a big thing in the NFL. This could affect the NFL for the long term. So if you don’t talk about it, I think you’re putting your head in the sand.”

One person Kay doesn’t have his head in the sand about is Mike Francesa. After a 19-month farewell tour, Francesa, Kay’s longtime drive-time rival and ratings foil on WFAN, decided to retire after a 30-year career, only to return four months later back to the airwaves.

“It was mixed feelings,” Kay said. “We had come so close to him when he was was towards his last shows [pre-retirement]. And I said, if we had more time I think we could overtake him.”

Well, now Kay has more time. During the period when Francesa was “retired,” Kay’s show outpaced the WFAN trio of Chris Carlin, Maggie Gray, and Bart Scott, “and although that felt nice, it would’ve felt better to beat Mike.” It remains to be seen whether Kay’s show can finally out-rate Francesa’s, but Kay made his case this way:

“I hate to say it this way, because it all starts Twitter madness, but our show to me is so much better, so much more fun, so much lighter, just like hanging out with buddies,” Kay said. “And Mike is preaching to you. But radio’s a habit, and there are people who grew up with him, and people just listen to him.”

On days the Yankees are home, Kay gets off the air at 6:22 and then makes a five-minute jog from the loading dock to the press box, puts his notes together, does the on-air pregame open for YES, gets something to eat, and is back on the air at 7 for the game.

Marriage and fatherhood has definitely changed things for Kay— who married local newscaster Jodi Applegate in 2011— but he said he tries to give his best to each of his jobs equally.

“When I was single, I didn’t have a care in the world, I would look for a third job,” Kay said, adding that if he ever felt like he was sacrificing his ability to do one job over the other, he’d probably leave that other job.

As it turns out, Kay was pretty close over the winter to landing that third job. In December, Kay was told he was being considered for the lead play-by-play role for ESPN’s Sunday Night Baseball, taking over for Dan Shulman, who left the gig to focus on his family and more local roles in his native Toronto while still maintaining his position as the network’s lead college basketball voice.

Kay was told he was in the running because of his conversational style.

“They said they see what I bring out in the analysts on YES, like that we do a radio show but it’s just a conversation,” he said.

Kay met with an ESPN executive, and later spoke with John Filippelli, the president of programming for YES, and discussed rearranging his 125-game schedule to work around Sunday nights. After an additional meeting with ESPN, Kay was told he was “in play” and later found out he was one of the finalists. Then, Kay heard nothing, other than that he was still in the running. Of course, Kay lost out on the job to Matt Vasgersian, who he considers “a top flight announcer.”

“I guess I was more disappointed than I thought I would be, because I just looked at it like one thing that’s always gnawed at me was if I could play nationally,” Kay said. “I kind of said well I’m 57, Matt’s young, Joe’s 50 [49], Joe Buck, those are the two national jobs that I would probably have a chance at. They won’t be open until I’m probably in my 60s, so I think that was my last chance. So for a day or so I was a little down about it.”

Of course, getting the ESPN job would’ve meant working with Alex Rodriguez, who Kay was extremely condemnatory towards during his one-year performance enhancing drug suspension.

“We didn’t talk for a year,” Kay said, adding that “we had a rocky relationship because I was very critical. And then we patched things up.”

Kay thinks he would’ve worked well in the booth with A-Rod, who he considers a baseball genius.

“I used to enjoy when he played here, just sitting by his locker,” Kay said, “it was almost a master class.”

And because of that, Kay texted Vasgersian after the latter had gotten the ESPN job, and told him to make Rodriguez throw away his notes, because he’s such an over-preparer.

“I can read stats. Don’t tell me stats, tell me what it’s like to stand out there with the bases loaded and people screaming in a 3-2 count.” Kay said. “A-Rod can do stuff that not many people can do. He’s gone through everything.”

Kay’s gone through a lot as well during his long broadcasting career. He said that he recently signed a five-year deal with ESPN to continue his radio show, and including various contract options, he has five years left on his YES contract, too. His long-term goal, he said, is to do both jobs as long as he can provided he remains in good health and that he has his family’s support.

“I can see myself doing the Yankees longer than I can do the radio,” Kay said. “Because with the radio, there’s no offseason and it’s a harder prep.”

Kay said he could envision leaving his ESPN radio show after five years, when he’ll be 62, but “I don’t wanna say that’s the end because we see how that works out for people.”

Kay envisions taking short-term YES contracts once his current pact is up, because although he wants to be there when his kids grow up, he loves his job and thinks it’ll be great to have his kids see him be the voice of the Yankees when they’re old enough to really appreciate it.

It’s a juxtaposition many go through with highly demanding jobs, and Kay is certainly feeling that. He asks his five-year-old “‘‘why don’t you watch daddy on TV?’ and she goes ‘when you’re on TV, you’re not here.’ So that kind of breaks your heart.” But his three-year-old son loves watching the Yankees and his dad on TV, with Aaron Judge as his favorite player, blasting home runs while his dad belts out his “see ya” call.

“And it’s kind of cool when you’re son is into it,” Kay said. “So now we’ll play baseball in the living room, and he hits the ball, he looks at me and he puts his hands out, and I’ll go ‘what?’ He says ‘see ya! You’ve gotta say see ya!’ That’s kinda neat.”

So while his kids pull him in different directions, Kay still has two high profile jobs with long-term security. He loves his jobs enough that he’s willing to stuff himself into a trailer parked inside a Bronx loading dock, talking about sports and chasing down the elusive radio ratings win over the ultimate godfather of sports talk.