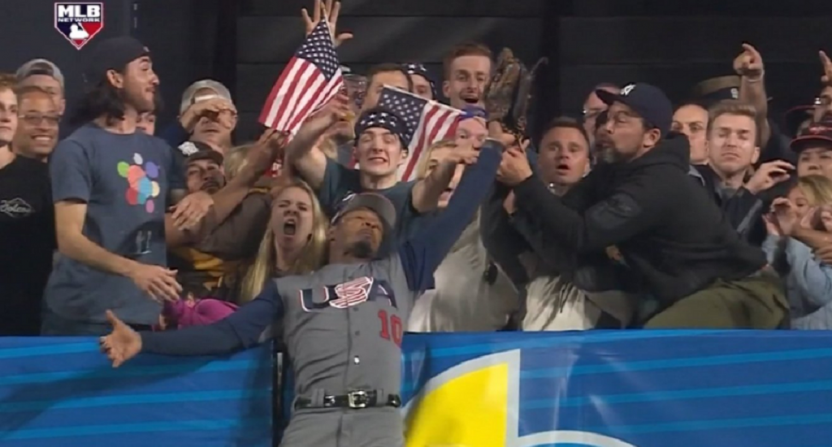 Is it too early to have a baseball catch of the year contender? I don’t think so, especially since this one involves two MLB stars in a WBC elimination game. And it’s even better in that it involves two stars that happen to play on the same major league team, the Baltimore Orioles.

Team USA led 4-2 in the bottom of the seventh, when the Dominican Republic’s Manny Machado cranked a flyball to very deep right-center. Machado certainly thought it was a dinger, and so did probably everyone else watching the game.

But Adam Jones had other ideas, and while on the run, UNBELIEVABLY robbed Machado of a homer. This is absolutely ridiculous, and even earned a tip of the cap from Machado:

The Dominican Republic could have had 2 homers in the 7th, if it wasn't for hometown hero @SimplyAJ10! #UnitedWeGrind ?? pic.twitter.com/GAGffpEqgk

The ball Adam Jones just caught is a HR 94% of the time. 106 MPH at a 26 degree launch angle. Wow amazing. pic.twitter.com/l8vNfyFIx1

Wow, whata catch by Adam Jones to steal a home run. And o's teammate Manny Machado can do nothing but tip his cap!

It doesn’t get any better than that, and could end up being a tournament-saving play for the USA. Robinson Cano would hit a solo shot for the Dominican Republic later in the inning, to trim the USA’s lead to one, but (literally as I’m typing this sentence) Andrew McCutchen just hit a two-run double to get the USA lead back up to 6-3 in the eighth.

This game has been a blast, and also included a two-run Giancarlo Stanton ROCKET homer.

Update: Team USA won the game 6-3, moves on to face Japan on Tuesday night in Los Angeles for the WBC semifinals. The Dominican Republic was eliminated with the loss.