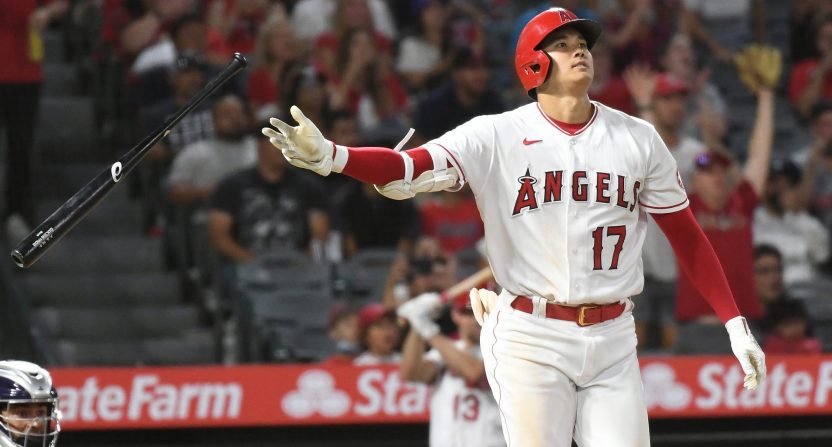 Well, this is an eye-opener.

Jon Heyman of the New York Post reports that the Los Angeles Angels are now listening to offers for two-way superstar Shohei Ohtani.

According to Heyman, one rival executive says that the Angels “want something like your top four prospects.”

Two other rival executives told Heyman said the chances of an Ohtani trade are “very slim” and “almost zero.”

Angels listening on everybody, and for the first time that includes Ohtani. One rival says they want “your 4 top prospects.” Rivals all believe it is s major long shot that Angels ownership ultimately OKs a Shohei dealhttps://t.co/w1jajqf9sM

The Angels, perhaps for the first time, are listening to trade offers for Shohei Ohtani.

Teams have been calling regarding potential deals for the two-way phenom, and while a trade involving the unique superstar is seen as very unlikely, the Angels are not hanging up the phone.

Even though Ohtani is a free agent after the 2023 season, “your top four prospects” seems like a low return.

Ohtani is essentially two superstars taking up one roster spot, which is an extremely valuable thing. Additionally, there’s the business side of this for organizations to consider: Ohtani grows the team brand worldwide, he boosts attendance, he boosts television ratings, etc.

Any team that’s lucky enough to acquire him is surely prepared to also meet his contract demands, which will be massive and likely unprecedented- but quite likely worth it.

There's also the business side of what adding him does. It's huge for worldwide branding, butts in the seats, and getting people to tune in.

Ohtani has a chance to win his second consecutive AL MVP award (but will have strong competition from Aaron Judge). He has a .256/.350/.489 slash line with 21 home runs as a hitter, and a 2.81 ERA in 99 1/3 innings as a pitcher. He’s been putting his pitching skills on display on Thursday night, with 11 strikeouts over six innings (including three consecutive strikeouts to escape a first-inning, bases-loaded jam):

Bases loaded, no one out? Shotime. 😤 pic.twitter.com/r4tgVkz3Um

Shohei Ohtani has 9 games this season with 10+ strikeouts

That's the most such games in MLB this season

Here’s a peek at how the baseball world is reacting to Heyman’s report that the Angels are listening on Ohtani offers:

I would trade the Giants’ top seven prospects just to get exclusive negotiating rights for the next 18 months, even if it meant Ohtani stayed with the Angels for 2023. https://t.co/Mvk9bVZHDR

Man, White Sox and Braves can get Ohtani cheaply! https://t.co/nYMx3Eqb2R

You can have ALL the prospects for Shohei Ohtani. The entire farm system. Every level. Have some picks, too. #RedSox https://t.co/ISzac0k9n8

Why would any team not give up their top four prospects for Ohtani? https://t.co/iItWZQiibC

The Rockies should trade every asset they have including their ballpark and the color purple https://t.co/1PxuYt98k1