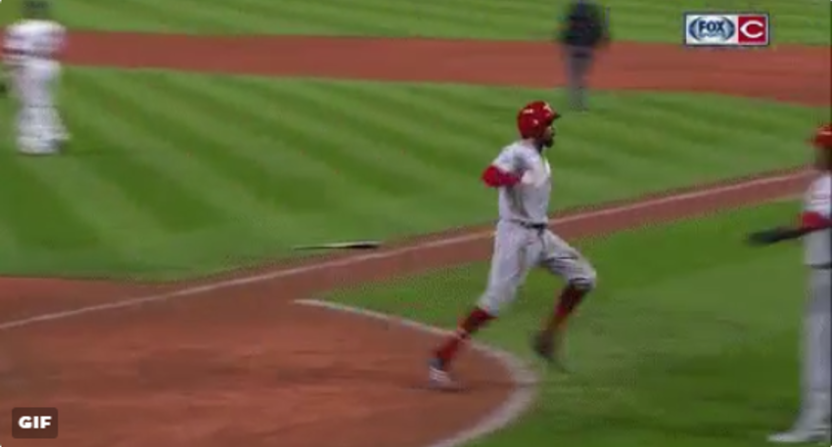 Cincinnati Reds’ center fielder Billy Hamilton is known for his remarkable speed, especially on the basepaths, and he showed that off in amazing fashion Wednesday night. With the Reds trailing the Cleveland Indians 3-2 in the top of the ninth, Arismendy Alcantara on third and Hamilton on first, and Cody Allen pitching for Cleveland, Hamilton took off with the pitch and Zach Cozart hit the ball into left field. Alcantara scored easily, but Hamilton just kept flying too, zooming around third and crossing home standing up for what would eventually prove to be the winning run:

CAN WE PLEASE TAKE A SECOND TO TALK ABOUT HOW FAST BILLY HAMILTON IS pic.twitter.com/jL43SqdI3e

Of course, part of this is because left fielder Michael Brantley dives for the ball, doesn’t make the catch, and has to look around to find it. That’s quite clear in this angle:

If Brantley had stayed upright and fielded the ball on the hop, he likely could have held Hamilton at third. Even if he had still dove, but located the ball quicker, he might have had a potential play at the plate. And this is also only possible because Hamilton was already in full flight when the ball was hit. But this is still incredible speed, speed well beyond most MLB players, and the cases where someone scores from first on a short single to left are exceptionally rare. And it’s not surprising that it was Hamilton who did it. As The Ringer’s Michael Baumann wrote Monday, Hamilton might be putting together one of the most impressive baserunning seasons in MLB history:

Even the great stolen base seasons of the 1980s were the result of a more aggressive basestealing approach. Hamilton’s on pace for 94 stolen base attempts — in the expansion era, only two players, Henderson in 1985 and Eric Davis in 1986, stole as many as 80 bases in so few attempts. In fact, Hamilton’s efficiency is as impressive as his aggressiveness. Baseball-Reference credits Hamilton with five baserunning runs about a quarter of the way through the season. Nobody else is above three, and the record is 19, set by Maury Wills in his 104-steal season in 1962. Hamilton’s stolen base success rate at the moment is 92 percent, and his 25 attempts are already tied for 34th most since 1951 (when both leagues started tracking times caught stealing) for a success rate that good. The most stolen base attempts with that high a success rate is 56, set by Jacoby Ellsbury in 2013.

Depending on how you balance volume versus efficiency, Hamilton is in the hunt for the best baserunning season of all time. A 19-run baserunning season could make Hamilton’s legs as valuable as Dexter Fowler’s bat was last year, but Hamilton runs the risk of flying under the radar because nobody cares about baserunning WAR; he’d have to chase down 100 stolen bases, if not the record of 130, in order to make large-print national headlines.

We won’t get 1998 home-run-chase-style coverage of Hamilton, but even if all he does is keep up what he’s been doing for the next four months, it’ll be the best baserunning season of at least the past 30 years by any standard. And that was more or less the expectation all along.

It should also be noted that Hamilton almost didn’t get a chance to make this play. During his at-bat in the inning, his ground ball to first was initially ruled a double play, but the call at first was overturned by a Reds’ challenge. That paved the way for Cozart’s single and Hamilton’s baserunning feat, and it gave us a remarkable highlight to watch. And it worked out for the Reds, too. They went from a 3-2 loss if that call had been upheld to a 4-3 victory, and Hamilton was crucial to that happening.