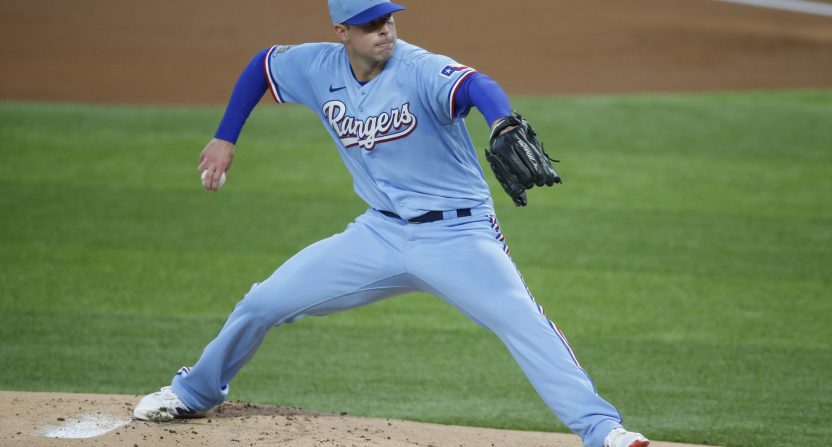 Texas Rangers starting pitcher Corey Kluber will be shut down for at least four weeks after an MRI revealed a grade 2 tear of the teres major muscle in his right shoulder, according to Evan Grant of The Dallas Morning News. Grant adds that “if – big if – [Kluber] returns this year, it would likely be as a reliever.”

Corey Kluber has a Grade 2 tear of teres major muscle in shoulder. He will be shut down for 4 weeks before being re-evaluated. If – big if – he returns this year, it would likely be as a reliever.

Corey Kluber had an MRI on Sunday evening which determined he has a grade 2 tear of the teres major muscle in the back of his right shoulder. He will be shut down from throwing for a minimum of 4 weeks and will be placed on the IL.

A minimum of four weeks is immediately half of the 60-game season. It’s not like Kluber will just step right on the mound for a big-league game after his rest time is done either; he’ll need to test his shoulder out and build back arm strength with several side sessions/sim games. And even if he’s able to return in September, it’s likely to only be as a reliever as Grant said. So, at the very least, we should assume that Kluber’s 2020 impact will be minimal.

Texas acquired Kluber in a trade with the Cleveland Indians last December, and he left his Rangers debut on Sunday after just one inning due to shoulder soreness that led to the MRI. He pitched just five games for the Indians in 2019 before suffering a season-ending fractured pitching arm. From 2014-2018, Kluber was as good as any pitcher in the American League and has two Cy Young Awards to prove it. We don’t know if Kluber would’ve returned to that form in 2020, but he at least was expected to be a rock-solid starter and innings-eater for Texas.

And this news comes one day after another two-time AL Cy Young winner, the Houston Astros’ Justin Verlander, was reported to be done with the season with an elbow injury. Verlander disputed the report, but did confirm that he has a forearm strain that will force him to rest for a while (and that could easily turn into a season-ending injury in the tiny season, even if he’s not officially done yet).

Additionally, the Boston Red Sox’s Chris Sale, New York Mets’ Noah Syndergaard, and New York Yankees’ Luis Severino are already done for the season with injuries. And the Los Angeles Dodgers’ David Price opted out of the season. So, a lot of big-time pitching names are already out for the year (and at least for a while with Kluber and Verlander), and the season just started a few days ago.

The Kluber injury really makes it difficult for the Rangers to surprise in the AL, but at least there are eight playoff spots to work with, so we’ll see. To stay in the mix, Texas will need Lance Lynn (3.67 ERA, 3.13 FIP last season) and Mike Minor (3.59 ERA last season) to repeat the production they had in 2019.

Update: On Tuesday, Corey Kluber was placed on the 45-day IL.