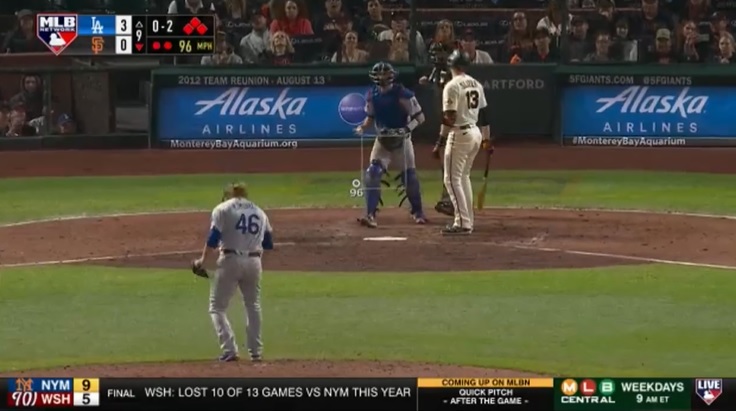 Just barely a week after the Los Angeles Dodgers won a game over the San Francisco Giants with a controversial third strike against Austin Slater being the final out, history has repeated itself.

The Dodgers led the Giants 3-0 heading into the bottom of the ninth inning of Wednesday’s game. San Francisco, though, rallied and with two outs, Austin Slater came to the plate as the game-winning run with the tying run on first base. Craig Kimbrel got the count to 0-2, then fired a pitch that appeared to be outside. Only, home plate umpire Cory Blaser didn’t agree and called strike three on Slater, ending the game.

#MLB could really use an automated strike zone. #SFGiants

MLB Umpires have been a hot topic of conversation throughout the season. And a controversial call to end a game only made the conversation louder.

Austin Slater has taken over 100 borderline strikes to end games and you can't convince me otherwise.

Wow, Kimbrel really got the benefit of the frame job by Austin Barnes on the 0-2 pitch to Slater, after being all over the place earlier in the inning.

Indeed, how big a strike zone often depends on how well a pitcher is controlling his pitches. If he’s consistently hitting the strike zone, pitches just out of the strike zone may get called strikes. If his control is off, pitches just inside of the zone might be called balls. While it’s a frustrating trait of MLB umpires, it is understandable.

But Kimbrel was not particularly strong with his control. Luis González walked with one out. Then, after a single by Joey Bart, Lamonte Wade Jr. was hit with a pitch to load the bases.

So, even though he had fired two strikes to Slater ahead of the controversial third strike, he hadn’t earned much benefit of the doubt.

Make no mistake, this is not why the Giants lost the game. Even if that pitch was called a ball, it’s still far more likely than not that Slater would have been retired to end the game. Much like his game-ending strikeout in Los Angeles, you could also say that Slater should have tried harder to protect with two strikes.

That all may be true — but none of it makes this call any better. Austin Barnes did a great job of framing behind the plate. But this pitch was never a strike. It started outside of the zone and never got back in.

We’ve seen greater and more confusing misses from MLB umpires this year. But calls like this to end the game with the tying run on base and the winning run at the plate won’t do anything to quiet the clamoring for robot umpires.