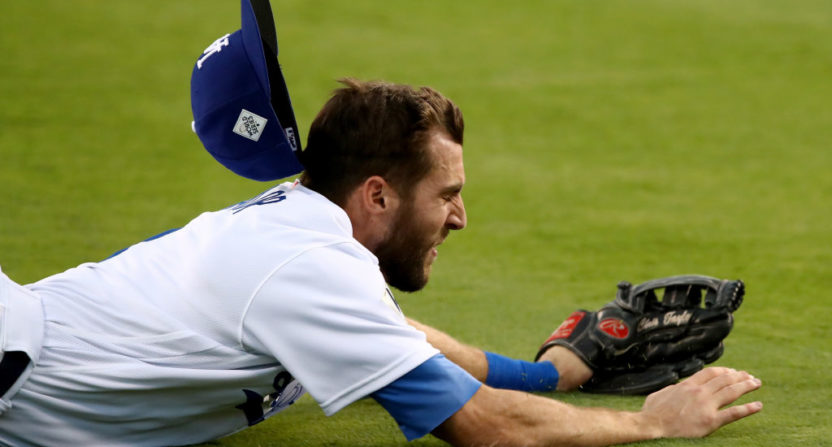 Game 2 of the World Series Wednesday saw a whole lot of weirdness, from George Springer’s head getting cut off by a projected ad to Fox’s Philadelphia affiliate losing the announcers for several minutes and repeatedly cutting to commercial to Yasiel Puig diving for a ball, missing it, getting up and throwing his glove to back-to-back extra-innings Astros’ home runs (which didn’t even win the game). But those were just some of the bizarre things that happened. Here are five other incredibly weird things that happened in this one.

1. The extra-innings home run record: There have been an incredible amount of baseball games since the National League’s formation in 1876 and the American League’s inception in 1901, so it’s pretty rare to see something that’s never happened before. That happened with the five extra-innings home runs Wednesday, though, something that had never happened in a MLB regular-season or postseason game:

There were five home runs hit in extra innings tonight. That's never been done before in an MLB game. And it happened in the #WorldSeries.

The five extra inning home runs hit tonight were the most in a single game. Not just in the World Series. In any game, ever played.

Of course, that covered just a few of the remarkable home run stats achieved Wednesday. Here are some others:

First time in team history (reg or post) hitting 3 in one game.

The @astros are the first team in MLB history to hit 3 home runs in extra innings of a postseason game.

8 HRs. Most home runs ever in a #WorldSeries game.

I won't keep doing these, but only six World Series in the 2000s have had more home runs than this one already has

Any of those stats would be notable in their own right. Together, they showcase just how crazy this was.

2. The umpire hit by a pickoff attempt: You know things are getting weird when an umpire gets hit, and not by a pitch or a foul tip, but by a pickoff attempt. Here’s the video of what happened in the bottom of the 10th inning, where Astros’ reliever Chris Devenski hit second-base umpire Lar Diaz while trying to pick off Kiké Hernandez with two outs:

Been watching baseball for 25+ years, and that was the first time I've ever seen the second base umpire get drilled on a pickoff attempt.

And now I've seen a wild pickoff throw hit the umpire in the groin. This is the best sporting event that has ever happened.

Pickoff hits the umpire. Now Laz Diaz can go to card shows and sign pictures of that play for $50 a pop if Astros win #WorldSeries

The umpire just got pegged by the pickoff throw, so now he’s out

The amazing thing here is how well this worked out for the Astros. If Diaz wasn’t right there, that ball goes into the outfield and Hernandez probably advances to third, which could possibly have led to a game-winning run. But because it hit him, Hernandez stayed at second, and Chris Taylor then flied out to center field, ending the inning and paving the way for George Springer’s two-run home run in the top of the 11th that would eventually prove decisive.

Some fan helping the @astros warm up. @Dodgers #WorldSeries2017 pic.twitter.com/pwsT5o3YI3

A.J. Perez of USA Today wrote that this started thanks to the guard trying to eject the fan:

A law enforcement official told USA TODAY Sports the man was yelling at a security guard who was stationed in the bullpen. The guard called for the man to be ejected and he jumped in the bullpen to go after the guard.

The official spoke on the condition of anonymity because he was not authorized to speak publicly about the incident.

Yeah, so that’s a weird one. And in a more normal game, that might have been the weirdest thing that happened. Here, it was only one of many.

The Dodgers had a pretty good streak going before tonight… pic.twitter.com/wk6Ec5BP7T

Oh, and that started with a game-tying home run by Marwin Gonzalez off Kenley Jansen in the ninth, snapping Jansen’s postseason record of 12 straight save conversions.

5. The ball that went off Chris Taylor’s hat: This was yet another moment that would have been higher on the weird scale in just about any other game. In the top of the third inning, the Dodgers had runners on first and third following a single from Josh Reddick, a sacrifice bunt from Justin Verlander, and a single from George Springer. On the next pitch, Alex Bregman drilled the ball into left-center, and L.A. center fielder Chris Taylor dove for it and missed, but the ball bounced off his hat to left fielder Joc Pederson:

That’s an extremely unusual bounce, and while it meant that Reddick scored from third, Springer had to hold at second. Rich Hill then struck out Jose Altuve and Carlos Correa to end the inning and strand Springer there. It didn’t mean all that much in the end thanks to the Astros’ eventual win, but this was still one of the weirdest plays you’ll ever see in baseball. Which made it fit right in with this game.