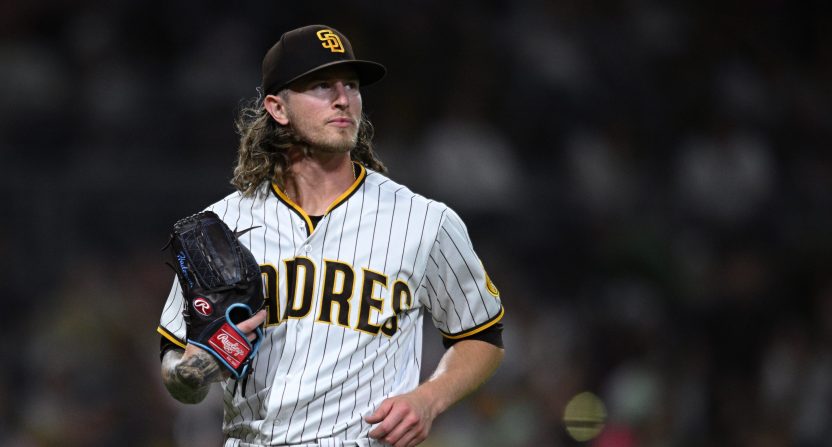 Things have not gone well for Josh Hader since he was traded to the San Diego Padres. On Thursday, he was given a chance to right the ship in a big spot. It did not go well.

Yu Darvish pitched brilliantly for the Padres during Thursday’s game against the Washington Nationals. But after allowing a pair of hits in the ninth inning, he was pulled in favor of Hader with the score tied 1-1.

Hader inherited something of a jam with runners on first and second base. But with one out, he didn’t need to worry about preventing productive outs. With any two outs the runners would have been left stranded and the game would have remained tied. It did not happen. And as has often been the case with Hader recently, it was his control that did him in.

Hader got the count to 2-2 against Luke Voit. But after Voit fouled off a pair of pitches, Hader hit him with a pitch, loading the bases. That brought Nelson Cruz to the plate and with the bases loaded and only one out, Hader needed go for the strikeout. He got another one of baseball’s true results, walking Cruz on four pitches.

And as the go-ahead run crossed the plate after ball four, the fans at San Diego’s Petco Park made it known that they were not happy with Hader.

Josh Hader walks in the go-ahead run and the boos are raining down at Petco Park pic.twitter.com/mSfmLs4E89

Hader got more settled in from there but with the bases loded, he couldn’t escape further damage. Keibert Ruiz followed Cruz’s walk with a sacrifice fly. After C.J. Abrams reached on an infield single to reload the bases, Hader finally got out of the jam when Lane Thomas flew out to left field but by that point, the damage was done. The Padres trailed 3-1 heading into the bottom of the ninth.

Washington’s Kyle Finnegan had some control issues of his own in the bottom of the ninth inning but got a ground ball double play from Jurickson Profar to end the game.

Hader’s performance came under heavy criticism with several in the MLB world wondering if the Milwaukee Brewers might have known something when they traded him.

Brewers had to know something about Josh Hader

I think the #Brewers knew it too. They picked up something with his mechanics that they didnt think was an easy fix and dealt him while there was still time. https://t.co/QMsHTEusaR

Wonder if something is up, and not just the departure from the Brewers. https://t.co/XmddQML3lH

Hader’s game is certainly in a funk. In four outings with the Padres, he has an 8.10 ERA, 2.10 WHIP and has also hit a pair of batters. And as bad as those numbers are, his performance has actually been worse. Both of the runs that scored with Hader on the Hill in Thursday’s outing were charged to Darvish. So, as bad as his performance was on Thursday, his ERA actually dropped.

There’s still time for Hader to get his form back and be one of the best relievers in the game. But the early returns on his trade from the Brewers been good for Hader or his new team.