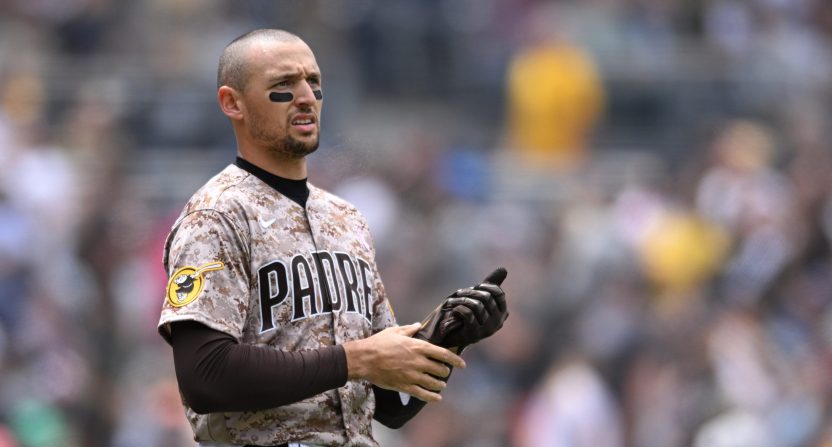 The Thompson brothers are now both back in California.

Right after Klay Thompson returned to the Bay Area to celebrate the Golden State Warriors’ latest NBA championship, brother Trayce has been traded from the Detroit Tigers to the Los Angeles Dodgers.

Without Mookie Betts, the Los Angeles Dodgers need to fill a very large space in the outfield and their lineup. They’re hoping that the 31-year-old Thompson can be part of that puzzle, along with Eddy Alvarez, as a right-field platoon until Betts recovers from a cracked rib.

Thompson has some major league experience and has 17 homers and a 1.086 OPS at Triple-A this season.

Thompson appeared in six games earlier this season with the San Diego Padres before being designated for assignment. He joined the Tigers last month and has been with their Triple-A affiliate for that time, hitting .299/.352/.639 with eight home runs.

Klay’s brother was originally selected in the second round of the 2009 MLB Draft by the Chicago White Sox and has appeared in over 200 games for six teams, including the Dodgers. In his MLB career, he’s hitting .205/.280/.397 with 26 home runs. He has hit better against lefties (.728 OPS) than righties (.648), which is likely to have been a major part of why the Dodgers made the move.

The expectation is that Betts can be back in two weeks or so. That means Thompson has until then to prove that he deserves to stick around even after Mookie returns, or at least set himself up for another big-league opportunity afterward.

Not sure what some people expected today. Mookie Betts will be back soon. Trading for Trayce Thompson is a low-risk move for the #Dodgers. James Outman needs consistent at-bats in AA and wasn’t an option. Miguel Vargas was obviously considered, but he’s not an outfielder.