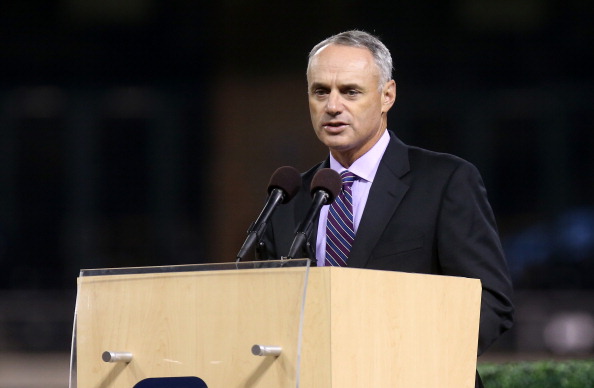 On Tuesday morning, The Athletic’s Ken Rosenthal reported that “those involved at [Major League Baseball’s] highest levels are increasingly confident games will be played in 2020,” amid the COVID-19 pandemic.

That’s been followed on Tuesday by USA Today’s Bob Nightengale reporting that “according to three executives with knowledge of the talks,” MLB is considering a plan for the 2020 season that includes three divisions featuring 10 teams each, with the season potentially starting in late June and no later than July 2.

The plan would get rid of the American and National Leagues,  and would instead have three 10-team divisions based on geography. Teams would play only games against opponents within their division.

The season would feature at least 100 regular-season games, and “an expanded playoff format.”

Major League Baseball officials have become cautiously optimistic this week that the season will start in late June, and no later than July 2, playing at least 100 regular-season games, according to three executives with knowledge of the talks. They requested anonymity because the plan is still under consideration.

And not only would baseball be played, but it would be played in their own major-league ballparks, albeit with no fans.

MLB is considering a three-division, 10-team plan in which teams play only within their division – a concept gaining support among owners and executives. It would abolish the traditional American and National Leagues, and realign the divisions based on geography.

The hope is that games would be able to be played in the teams’ home (empty) stadiums, and the thinking seems to be that arranging things geographically would reduce travel, trouble, and risk during the COVID-19 pandemic. However, it’s possible — and more likely *probable*, considering the COVID-19 outbreak and precautions being taken in particular regions — that the season would have to begin with games in Arizona, Florida, and/or Texas.

The idea of playing games only in an “Arizona bubble” hasn’t gone over well with players, with MLB superstars Mike Trout and Clayton Kershaw particularly being vocal about their disapproval. So, being able to play in the regular home ballparks — potentially allowing players to be around families, something that Trout and Kershaw have been concerned about — would be much more appealing to players.

Here are the highly interesting proposed divisions, according to Nightengale:

Now, there are several hurdles to making this all happen, and so quickly.

As Nightengale notes, the plan is “pending approval of medical experts and providing that COVID-19 testing is available to the public.” That’s obviously a *huge* thing. While there continues to be progress and optimism on that front, there’s no guarantee things are improved enough to play — and organize — several months of professional baseball games. That’s especially the case when considering the idea of home stadiums being able to happen for every team. Some regions are “opening” back up, but that’s certainly not the case everywhere, and may not be for a long while. California governor Gavin Newsom has made it clear for weeks that he’s pessimistic on sports being ready to go in the state anytime soon, for example (and California has five MLB teams, or, 1/6 of the league’s teams).

And what would happen with the postseason if there are to be 100+ games squeezed into a regular-season schedule that may not begin until July (especially if it’s an “expanded” postseason format)? That’s left unclear from Nightengale’s report, but it seemingly points to a postseason going into late November or even December, which is obviously a concern for cold-weather locations. Maybe it means a neutral-site World Series, an idea which was rumored earlier this month.

Additionally, even if this — or any — proposal is approved, a mini spring training is still necessary for a few weeks, as Nightengale alludes to:

MLB teams likely will still return to their own spring-training facilities in Arizona and Florida when they resume workouts. Players are expected to be given a week to return to spring training sites, and have 18 to 21 days before the start of the season.

That’s something that hasn’t been talked enough about when discussing an MLB return. And we’re already about to enter May, with no official plan in place. Chicago White Sox catcher James McCann — a 2019 AL All-Star — recently made great points about the risks of returning too soon:

“If we rush things, we possibly create a recipe for disaster, whether that is with coming back too soon and people getting coronavirus, or you rush back things to where guys aren’t ready to play and you have injuries that last into following seasons.

Unfortunately, we don’t control the virus, and we don’t control how that’s going to play out. … I’m definitely an advocate for making sure that not only are we as players and our families and coaching staff and everybody doing what’s responsible but also setting an example for the public that we are not rushing back to play a game just because we feel like we have to.”

So, it will be difficult for everything to come together smoothly, and there’s undoubtedly going to be risk involved if MLB is really looking to play real games within the next six-to-eight weeks.

But that’s clearly what the league is hoping for, and officials and executives told Nightengale that they’re very optimistic about it happening.

“It’s all coming together,’’ one of the officials said. “I’m very optimistic.”

“This is going to be a season,’’ one of the executives said, “like we’ve never seen.

The proposal is very unique and wild, and potentially difficult for some baseball purists to take seriously, but sports-starved fans would gladly take it right now.