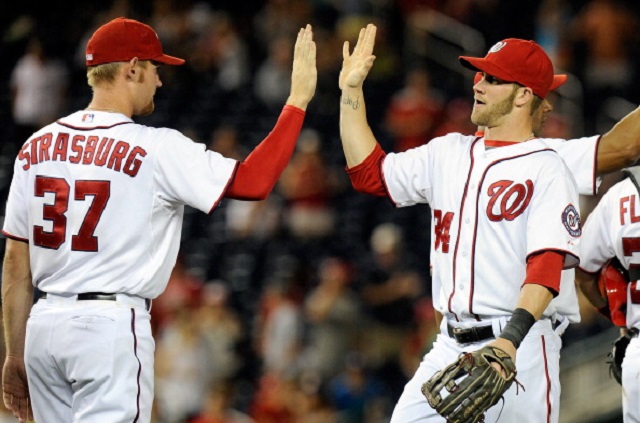 Stephen Strasburg seemed assured of pitching in another uniform next season. The Washington Nationals certainly appeared to be readying themselves for his eventual departure.

That’s what made Strasburg signing a seven-year, $175 million contract extension with the Nationals on Tuesday so surprising. Obviously, taking the money isn’t a surprise. It’s the sixth-largest deal a pitcher has ever agreed to. The average annual salary of $25 million puts Strasburg among the top 20 highest-paid players in MLB.

Maybe Strasburg could have earned even more in free agency this winter. What sorts of offers might other teams in need of starting pitching have made to a pitcher who would be 28 years old when he hit the open market? As successful as Strasburg has been in his seven-year MLB career, his prime years and best performance were arguably yet to come.

Consider that Strasburg would easily have been the top prize in a less-than-impressive upcoming free agent market, and it’s not difficult to imagine that the right-hander could have received a $200 million deal. Though Strasburg is a tier below the likes of Clayton Kershaw, David Price, Max Scherzer and Zack Greinke, free agent deals aren’t necessarily about who’s better. The value of such contracts are often determined by when a player hits the open market, and Strasburg’s timing looked ideal.

But Strasburg re-signing with the Nationals was also unexpected because the two sides looked ready to part ways.

When Strasburg leaves @Nationals for another team for more money, will Washington still like the decision to shut him down for his good?

Strasburg has often seemed like he couldn’t wait for the day to return to his native California, where he wouldn’t have to spend the first one or two months of the season pitching in cold weather. On his D.C. radio show, ESPN’s Tony Kornheiser often derisively refers to Strasburg as “the orchid,” who only blooms when it’s 75 degrees outdoors. The right-hander admitted after news of the extension became public that for someone who’s spent most of his life in California, “the East Coast is a little bit of a change.” A return to San Diego or joining up with the Dodgers or Angels appeared to be imminent once he was free to sign elsewhere.

Accordingly, the Nationals were making preparations for his departure. Signing Scherzer last year to a seven-year, $210 million deal certainly seemed to indicate that the organization felt that Strasburg wasn’t a No. 1 starter. The Nats could get two more years out of Strasburg before his free agency and make a run at the World Series championship expected for them over the past three seasons. After that, general manager Mike Rizzo had Washington’s rotation set up for the future.

Scherzer was already in place as the ace. Gio Gonzalez had two club options through 2018, and could likely be re-signed at a far less expensive price than Strasburg. Tanner Roark is under club control through 2019 and showed he was a reliable major league starter. Joe Ross, just 23 years old and a former first-round pick, isn’t even eligible for arbitration until 2019 and under club control for five more years.

Then there’s the big prize, the current crown jewel of the Nationals’ farm system in Lucas Giolito. The right-hander, 21, came into 2016 rated as the No. 1 pitching prospect in baseball, according to MLB.com. Baseball America had him ranked No. 2. While he’s struggled early on this year with Double-A Harrisburg, compiling a 4.74 ERA and walking nearly six batters per nine innings, Giolito still has strikeout stuff (21 Ks in 24.2 innings) and is expected to make the jump to the majors next season. He might as well have had “Stephen Strasburg replacement” attached to his file in the Nationals’ front office.

With the future rotation seemingly established, the decision to re-sign Strasburg was a curious one. Not just from a manpower standpoint, either. Sure, the Nats have five arms ready to go, with A.J. Cole and Taylor Jordan also lined up as either potential starters or organizational depth. But what about the offense? Doesn’t Washington also need to bolster its lineup for the present and future?

Rizzo seemed to think so during the offseason, chasing Ben Zobrist and Yoenis Cespedes before losing out on both hitters due to the large amounts of deferred money that the team asked them to accept in their respective offers. Eventually, the Nationals found Daniel Murphy willing to sign with them and thus far, that looks like a surprisingly great move. (Murphy is currently batting .398.)

But besides Murphy (and Wilson Ramos, who’s hitting .372 early on), Bryce Harper doesn’t have much help in the Washington lineup. No wonder teams are walking him six times in a game. Why pitch to virtually the only Nationals batter that can hit the ball out of the park? Ryan Zimmerman hit two home runs Tuesday night against the Tigers, but is that indicative of a breakout and some production behind Harper in the lineup? Or was that just one good night for a player who had one homer going into Tuesday’s game?

Help isn’t necessarily on the way from the minors, either. Trea Turner is expected to take over at shortstop, whether later this season or next year. But though the hope is that he’ll hit for a high average with some extra-base power (that could result in some home runs), Turner isn’t a slugger. Infielder Wilmer Difo also has some extra-base pop, though likely won’t hit for as much average. But he’s essentially blocked by Murphy. Outfielder Victor Robles is highly regarded, but is currently playing in low Single-A and has a few years to grow into his potential power.

However, those players would only complement Harper in the Nationals’ lineup and likely wouldn’t serve as run producers in the middle of the batting order. Which brings this to the biggest question resulting from Strasburg’s signing a contract extension: What will the Nats do with Bryce Harper? He has two more seasons of arbitration eligibility left and Washington will likely attempt to buy those years out in an attempt to sign Harper to a long-term extension. But with the monumental payday and likely history-making contract awaiting him in free agency, Harper and agent Scott Boras likely won’t turn away from that opportunity. 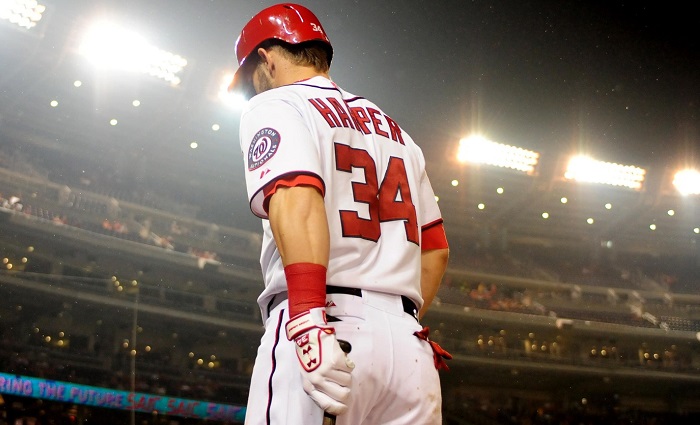 Of course, there were similar sentiments with Strasburg up until this week. Boras typically encourages his clients to hit the open market. Why deny the millions more sure to be available in free agency? That is, unless the player’s current team offers a contract equal to market value (and the player prefers to stay with his original club). Could the Nationals prevent another homegrown star from a multi-million dollar auction with a contract extension so lucrative that Harper and Boras could possibly pass on free agency? Can owner Ted Lerner essentially hit back-to-back home runs here?

Yet the situations are obviously different. While Strasburg was going to be the top pitcher available in free agency, he likely wasn’t going to yield a contract worthy of the best player at his position. When Harper becomes a free agent after the 2018 season, he will only be 26 years old and arguably baseball’s top player. Jason Heyward nearly got $200 million this past offseason, based largely on being 26 years old and relatively productive. Harper is a far more impactful player, who will not only be the face of a franchise for the next 10-plus years, but also perhaps the most recognizable star in MLB.

The number currently being thrown around with a potential contract for Harper is $400 million, which is the natural next step up from the $325 million Giancarlo Stanton signed in 2014. Are the Nationals willing such a contract to their payroll? Including Strasburg’s extension, the team now has four $100 million-plus deals on their current and future player budgets. Harper will obviously be in a different category. And if Washington does meet Harper’s terms with a historic package, will the front office be able to field much of a team around Harper, Strasburg and Scherzer, each of whom will make more than $30 million per season?

The deferred money in Strasburg and Scherzer’s contracts will help, and maybe those moves were made with clearing money for Harper in mind. But will Harper agree to such deferrals if there’s a chance another team will provide more money up front? That’s probably a question the Nationals can worry about later, as they prepare for Harper entering free agency or assemble an enormous proposal that at least makes him consider signing a contract extension. Lerner has already shown Boras that he won’t short-change his stars in an appeal for a hometown discount. (And he previously demonstrated with Jayson Werth’s overblown seven-year, $126 million deal that the Nationals will pay top dollar for free agents.)

It still doesn’t quite seem imaginable that the Nats will be able to persuade Harper not to hit the open market and acknowledge the inevitable destiny that many joke about by becoming the center fielder for the New York Yankees. Strasburg’s contract extension probably doesn’t change that. But it certainly seems to show the team’s way of doing business can change. If there’s one player worth ditching a business plan for, it would be Bryce Harper.