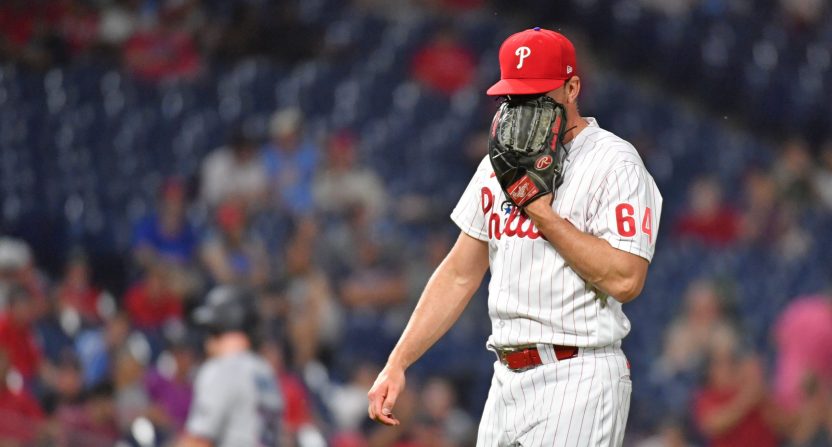 Fans of the Philadelphia Phillies have seen a lot of bad defense and implosions from their beleaguered bullpen in 2022. In Tuesday’s game against the Miami Marlins, they saw a lot of both.

The first bullpen implosion came in the top of the seventh inning. Zach Eflin started the game on the mound for the Phillies and had a rough first inning, allowing four runs. He stabilized from there, though, going six innings and not allowing another run. Philadelphia’s offense, meanwhile, got going, tying the game in the fourth and going up 8-4 in the fifth inning. But after six innings, Eflin was pulled, giving the ball to Jeurys Familia. That went poorly.

Familia immediately got into trouble when he surrendered a lead-off double to Avisail Garcia and walked Jon Berti. Familia then got Miguel Rojas to lineout but Jacob Stallings followed that with a three-run home run.

DON'T COUNT US OUT. pic.twitter.com/FJr8URNhHx

At that point, manager Rob Thomson went out to get the ball from Familia and called on Seranthony Dominguez. Dominguez hadn’t allowed a home run all season. But that changed when his first hitter, the hot-hitting Jazz Chisholm Jr., sent a 1-2 pitch over the wall.

In just five hitters, a four-run lead was wiped out. Amazingly, though, the Phillies bounced back well. Dominguez got out of the seventh inning without any more damage and Brad hand retired the Marlins in order in the eighth. Rhys Hoskins hit a home run in the bottom of the eighth inning to put Philadelphia back ahead. Unfortunately, all that did was set the stage for a brutal ninth inning.

It started on defense. Alec Bohm made a great stop on a sharp grounder from Rojas but couldn’t connect with Hoskins on the throw and was charged with an error. Corey Knebel then walked Stallings and Chisholm to load the bases, then allowed a game-tying single to Garrett Cooper. At that point, he was replaced by Andrew Bellatti who started well, retiring Jorge Soler with a non-productive out. Then, things went downhill.

Jesús Aguilar appeared to pop out but catcher J.T. Realmuto couldn’t hold onto the ball. Aguilar took advantage of the second chance. He hit a ball to right field that would have been deep enough for a go-ahead sacrifice fly. But Nick Castellanos showed us why he’s never been known for his glove. While Castellanos didn’t make an error on the play, a good defensive right fielder would have caught the ball. Instead, Aguilar got a two-run double out of it, capping off a disastrous sequence for the Phillies.

Ineffective pitching from the bullpen and bad defense is a movie the Phillies have seen a lot of in 2022. Baseball fans were highly critical of this display.

We knew the Phillies bullpen and defense was going to lose us some games this year.

On FULL display this evening.

Don’t worry Phillies fans, ownership will spend a lot on a SS this offseason to address the bullpen

Death, taxes, me complaining about the Phillies bullpen

#Phillies defense remains atrocious. Catch the damn ball. No excuse for this at the major league level.

Please, for the love of all that is holy, invest in a bullpen @Phillies.

We can’t take this anymore.

This @Phillies collapse is one their worst this season. Nothing is going right. Errors, AWFUL pitching, poor defense. Not gonna catch the Mets this way boys. Everyone apologize to Hoskins. #phillies #RingTheBell

Hoskins did have a tremendous game at the plate, going 4-for-5 with two home runs and six RBI. And really, Tuesday’s game was a perfect microcosm of what Philadelphia has been this season. The Phillies scored nine runs on 13 hits. That’s awfully impressive and in most cases would be good enough to win easily.

But that didn’t happen. And because of consistent woes from the bullpen and defense, we can’t just call this a fluke rough game that will happen to every team at some point.

If there’s good news for the Phillies, it’s that they’re 31-31 and are well within striking distance of a Wild Card spot. But Philadelphia hasn’t reached the postseason since 2011. And if these issues aren’t fixed, that drought will not end in 2022.