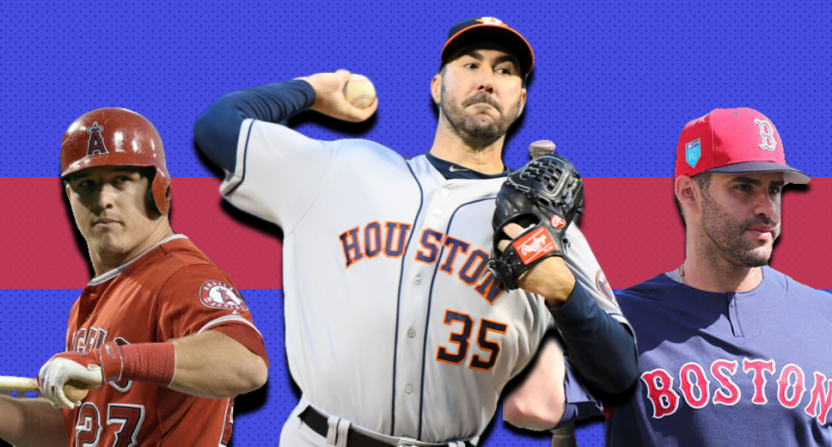 Within the next couple of weeks, Major League Baseball will announce the rosters for the upcoming All-Star Game, with the starting lineups voted on by the fans and the pitchers and bench players chosen by the players and the team’s manager.

As usual, there will be poor choices, and there will be snubs. Under-qualified players will be handed a spot on the team and over-qualified ones will be left at home. With so many different groups informing the roster construction, mistakes are inevitable.

But that doesn’t mean we can’t dream. For the second year in a row, we’re offering up our perfect All-Star rosters, full of only the most deserving players. We will follow all of the game’s roster-construction rules — 34 players, including one from each team — while weighing a player’s output this year against his track record, so that the teams are composed of both established stars and breakout performers.

We’ll get to the NL team later this week. For now, here’s the AL:

Seven of these nine slots were incredibly easy to fill. Jose Altuve has fallen off slightly from his AL MVP season but still ranks among the league’s best players. Jose Ramirez is the best player casual fans have never heard of. Francisco Lindor is submitting his most impressive season yet. Aaron Judge has duplicated his historic rookie season. Mookie Betts was an MVP candidate before getting hurt. J.D. Martinez has brought his prodigious power to Boston. And Mike Trout is an all-time great player who keeps getting better.

The other two slots though… oof. No American League catcher is having a particularly remarkable season, leaving Rays backstop Wilson Ramos (.293/.340/.469, 10 home runs) as the default. And whereas the NL is absolutely loaded with stud first basemen, the AL is bereft of them. Moreland is having a genuinely strong year (.299/.368/.569, 11 dingers0), but his name doesn’t exactly scream “All-Star.” It would be nice if we could transplant some shortstops to catcher of first base, but alas.

Again, catcher and first base are the weak spots, with a surprising rookie (Max Stassi) and an underperforming veteran (Jose Abreu, who snags this spot as the White Sox’s lone representative). The rest of the group features a combination of stalwarts (Manny Machado, Giancarlo Stanton, George Springer), good players having great years (Jean Segura, Andrelton Simmons, Eddie Rosario) and breakout veterans whose numbers can’t be denied (Jed Lowrie, Eduardo Escobar),

Yankees fans might be surprised to see Stanton on this list, and indeed the reigning NL MVP’s numbers are down from last year. But thanks to a recent hot streak, Stanton is hitting .266/.340/.519 with 19 homers, and there simply aren’t many outfielders who have produced better.

Before moving on, we owe some apologies. An apology to Carlos Correa, Xander Bogaerts and Didi Gregorius, who would be All-Stars in many years (or over in the NL) but can’t crack the roster in a circuit absolutely loaded with potent shortstops. And an apology to Matt Chapman and Andrew Benintendi, who got bounced to make room for token Royals rep Whit Merrifield and token Rangers rep Shin Soo Choo.

No one will be surprised at the collection of Houston and Cleveland arms here. There’s a reason those two teams have the two best staff ERAs in the majors this season.

But there’s good pitching to go around. In fact, each of the top four teams in the AL features an unquestioned shutdown ace. Presumptive All-Star starter Justin Verlander (and arguably Gerrit Cole as well) for the Astros, Corey Kluber for the Indians, Luis Severino for the Yankees and Chris Sale for the Red Sox. After the top arms, there’s still room here for some first-timers: Trevor Bauer, Ian Snell, Mike Clevinger and J.A. Happ, all of whom are having excellent years.

Apology to Jose Berrios, who was displaced by Happ, our lone Blue Jays rep.

As a general rule, the All-Star Game could use far fewer relief pitchers. No one needs to see some seventh-inning specialist with a solid ERA in 32 innings beat out a stud starter. With that in mind, we have narrowed our list to four undeniable arms. Aroldis Chapman is having the best year of his excellent career, Edwin Diaz is striking out the world, Blake Treinen has turned his impressive stuff into impressive results, and Joe Jimenez is nasty enough that he would be here even if the Tigers didn’t need a rep.

And with that, we have our 34 players. For those counting, that’s five Astros, five Indians, four Yankees, four Red Sox, three Angels and no more than two of anyone else. Stay tuned for NL picks tomorrow.