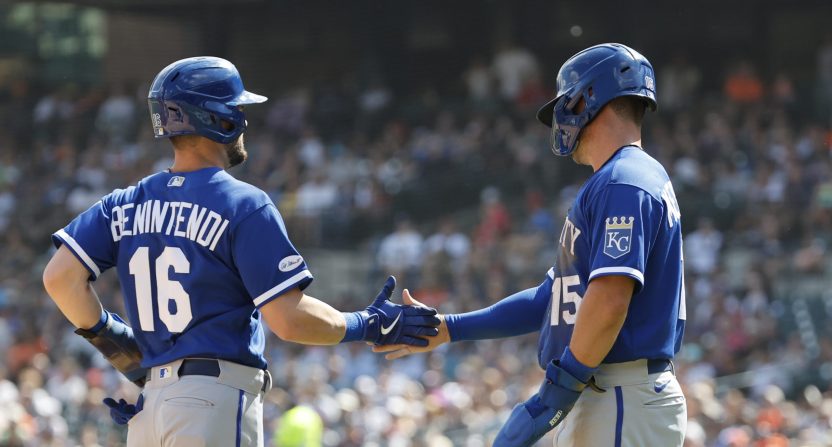 The Toronto Blue Jays will host the Kansas City Royals in a four-game series right before the All-Star Break. Only, the Kansas City team that the Blue Jays see will look a lot different than the Royals team that has faced the rest of the league this season.

Jeff Passan of ESPN reported that 10 Kansas City players are unvaccinated and therefore will not be permitted into Canada. The list includes — but is not limited to — All-Star outfielder Andrew Benintendi.

And we thought that the Philadelphia Phillies would be short-handed when they traveled to Toronto without catcher J.T. Realmuto. This news makes Realmuto’s situation seem like child’s play.

MLB fans had a variety of reactions to this news.

Congrats to like half the Omaha Storm Chasers roster on making the big leagues!!! https://t.co/0ogpXpZLaw

if the Jays don’t sweep i’ll be mad. https://t.co/IhDe8AGHdH

So Benintendi is off the table there ya have it https://t.co/ByrQHuJRSs

Weird how a year and a half of spurious anecdotal evidence hasn’t been enough to convince some players that, yeah, the shot ain’t gonna kill your baseball skills. https://t.co/qYpHX97YtX

lmao imagine if they had anything to play for. https://t.co/jSjd3tfGey

Our list of dummies. Guess I’m glad we’re not in contention, or it would really be annoying! https://t.co/iGAoxwHteR

The truth is, if there ever was a season for Kansas City be so undermanned going into a four-game series, it’s this one. The Royals will enter the series against Toronto at 35-53, which has them in last place in the American League Central and ahead of only the Oakland Athletics in the American League.

Toronto, however, is a contender for a Wild Card spot and will go into the series with Kansas City with an even bigger leg up than normal. So, for the Blue Jays, this is great news, even if it will add more pressure on a team that just fired its manager.

What really could be altered by this revelation is the player’s trade values. As Passan noted, Benintendi is a prime trade candidate. But if he’s not vaccinated, it’s hard to imagine anyone in the American League East trading for him, knowing he’d have to miss any future series in Toronto. Every team in the American League East is at .500 or better and all have a series left in Canada.

Other potential contenders, like the Cleveland Guardians in the American League and even the St. Louis Cardinals in the National League have to cross the border once and would have to consider a potential trade target’s vaccination status.

Regardless of what one feels about vaccine mandates, this issue isn’t going away any time soon. While it’s doubtful that any team will be as undermanned as the Royals are going forward, expect to hear more similar reports in the future.