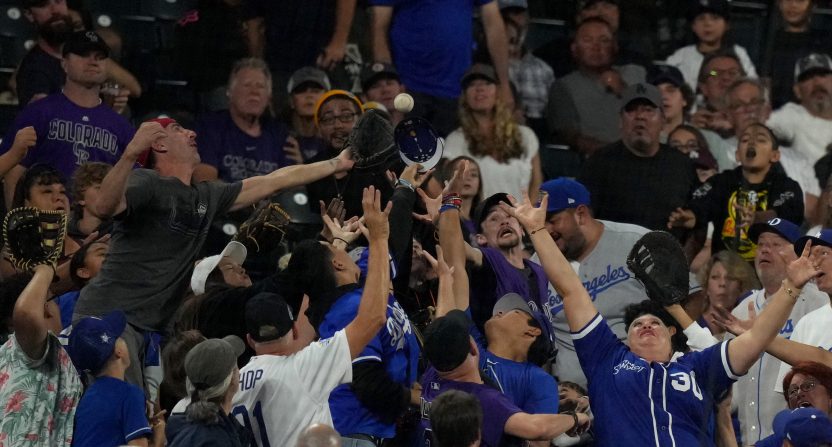 In August, noted baseball collector Zack Hample tried to garner sympathy for himself by posting two videos of an interaction he had with a Coors Field usher and security staff during a Colorado Rockies game. It did not go as planned.

Hample is heard in the videos berating Coors Field ushers and security for enforcing their rules about where ticketed fans are allowed to be. The notorious ballhawk had attempted to enter a prohibited section to chase a home run ball and didn’t like the answer he received from the staff.

shout out to the Rockies ushers for putting this man child in his place. Zack Hample remains the biggest dork on the planet. pic.twitter.com/f1rQgFXosB

There was one interaction, in particular, involving an usher who wouldn’t let Hample go into a section where he did not have a ticket to potentially retrieve a home run ball. It seems pretty cut and dry but Hample seemed to think that this person was somehow the bad guy in the scene, an opinion very few MLB fans shared with him.

On Tuesday, Twitter user LoveTheRox caught up with that usher, whose name is John, and asked him about the incident. He ended up sharing an anecdote about something that happened before Zach turned on his phone to record things.

Last night I met John, the usher from Zach Hample’s August 2022 visiting Coors Field video. John was very nice; out of curiosity I asked him if there was more to the story (linked below) than Zach’s video showed. He said absolutely, including something he witnessed pregame… pic.twitter.com/GnBQ3Dn5se

“I was working a day game against the St. Louis Cardinals,” said John. “During batting practice…Zack was down below the handicap section. There was a little boy in the row right above that. He asked one of the coaches who was walking on the field, “Hey coach, could you give me a ball?” Coach threw it up to him. Ball hits him in the glove, bounces down on the concourse here. Zach picks it up, comes walking towards me. I said, “Why didn’t you give the ball to the kid?” He said “Because it’s my ball. He dropped it so it’s my ball.”

That sounds a lot like many other stories people have shared about Hample. However, the ballhawk responded to the claim with a video of his own. The video shows a Cardinals player throwing a ball towards the fan section, where it falls short of its intended target. Hample picks up the ball and hands it to the kid who called for it.

For the record, THIS is the only baseball that I picked up at the August 11th Rockies game. pic.twitter.com/5kNbdg6QJI