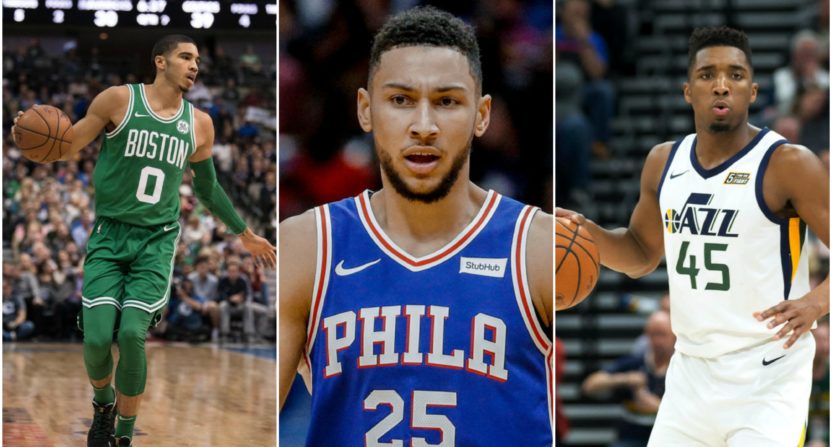 Last spring, NBA Rookie of the Year voters were left with only a few real options, all flawed. Joel Embiid had been great, but played only 31 games. Dario Saric had shown flashes, but ultimately posted only modest stats. Malcolm Brodgon, the eventual winner, was a solid player but certainly no dominant force.

This coming spring, voters will have no such trouble finding a worthy Rookie of the Year. Across the NBA, rookies are flashing potential and posting big numbers, even as No. 1 overall pick Markelle Fultz sits on the sideline with a shoulder injury and No. 2 overall pick Lonzo Ball struggles with his shooting.

In addition to do-it-all potential superstar Ben Simmons, rookies from Boston (Jayson Tatum) to Utah (Donovan Mitchell) and everywhere in between are filling up the stat sheet. The season remains young, but this rookie class looks as if it could go down as one of the best in a while.

If those figures hold, they will both be the highest for a rookie class since 2008-09. And those high-scoring newcomers aren’t simply getting buckets by chucking for bad teams. Five of the nine double-digit scorers are shooting at least 49 percent from the field, and arguably the three highest performing players in the class suit up for squads currently in playoff position.

This class is fun not only for its strength and depth, but also for its variety. There’s Tatum, the No. 3 overall pick out of Duke who stepped in as a starter when Gordon Hayward went down and blossomed into a star ahead of schedule, scoring 13.8 points per game on a ridiculous 50.2 percent, including an even-more-ridiculous 50 percent from 3-point range. For good measure, he leads qualified rookies in defensive rating.

But there’s also Kyle Kuzma, who was selected No. 27 overall and entered Lakers camp as the other rookie but is vastly outplaying Lonzo, with 16.1 points on 49.1 percent shooting, plus 6.6 rebounds. For all the hype around a handful of top players in last year’s draft, the fairly anonymous Kuzma would have an All-Rookie spot locked up if the season ended today.

The rookie leader in PER (minimum 15 minutes per game) is actually John Collins (20.42), a lanky Atlanta Hawks big man who, after being drafted No. 19, has put up 11.5 and 7.1 while ranking fifth in the entire NBA in field-goal percentage (59.2). Collins was considered raw coming out of the draft, but has been a standout offensive player over his first 27 professional games.

And don’t forget Dennis Smith Jr., the bouncy Mavericks point guard who may not have the best stats of any rookie (14.4 point on 39.4 percent shooting),’ but probably has the most impressive highlights. Whether or not he winds up on an All-Rookie team, he should definitely secure a spot in the dunk contest.

Some of the BEST dunks from @dallasmavs rookie @Dennis1SmithJr in his career thus far!

Lost in the shuffle, thanks largely to his team’s losing, has been Chicago forward Lauri Markannen, the No. 7 overall pick. Markannen’s percentages aren’t great, as the Bulls struggle with spacing and opposing defenses key in on their few competent players, but the seven-footer from Finland via Arizona has tallied 14.7 points and 8.1 rebounds a game while flashing some impressive range.

The rookie of the moment might be Mitchell, an athletic combo guard the Jazz snagged with the No. 13 pick. He ranks second among rookies with 17.3 points per game, shooting 37.4 percent from long-range, and could easily wind up the best scorer in the bunch.

And then there’s Simmons, the No. 1 overall pick in 2016 and the undisputed creme of this class, a 6-foot-10-inch point forward already drawing comparisons to LeBron James. Even with no jump shot to keep defenders honest, Simmons is averaging 17.5 points a game on 50.4 percent shooting, while racking up 8.9 rebounds and 7.7 assists per contest. He could be an All-Star this year, will be an All-NBA candidate before long and might win an MVP one day.

The list goes on. Kings guard Bogdan Bogdanovic has established himself as a marksman. Raptors wing OG Anunoby looks like a two-way contributor. Heat center Bam Adebayo is shooting 61 percent. And again, this is all with Fultz wearing street clothes and Lonzo searching for his jumper. This collection of rookies is ultra-talented at the top, and it’s as deep as any we’ve seen in years. It’s a group we could be talking about for a long time to come.