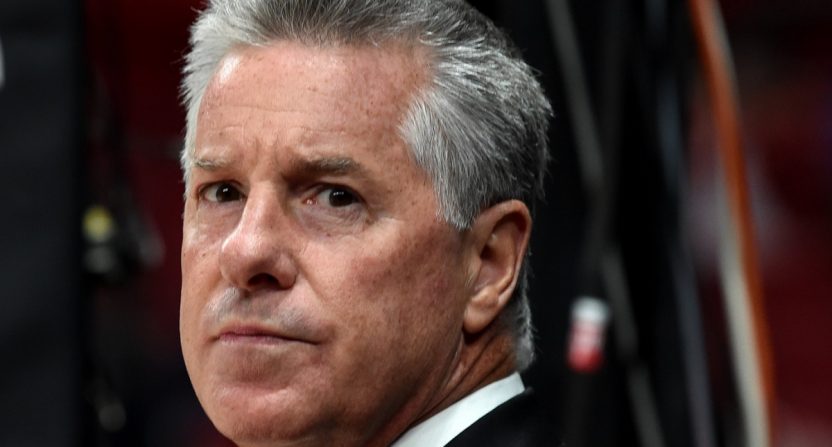 On one level, the Portland Trail Blazers’ decision Friday to fire general manager and president of basketball operations Neil Olshey would seem to be a positive step for safer workplaces in sports. However, the part of their statement that says “we will not release or discuss it” is not great. That ties into a problematic wider pattern of leagues and teams admitting errors, but not fully disclosing what happened. Here’s the team’s statement:

The Blazers’  decision to part ways with Olshey comes a month after they announced an independent investigation from law firm O’Melveny and Myers into “concerns around workplace environment” raised by non-player personnel at their practice facility. Their statement alone on that offered very little. But reporting from Aaron Fentress of The Oregonian and Chris Haynes of Yahoo spelled out at least some of what was at issue, with particular notes like “Olshey’s conduct routinely went beyond drive and passion and veered into verbal abuse and bullying” (Fentress, as per six anonymous sources) and “multiple employees assert they have had multiple grievances with his treatment of staff in the workplace” and “several staff members raised concerns with the organization’s alleged “mishandling” of the situation when video coordinator Zach Cooper died in April 2020” (Haynes).

Fentress’ piece there is also notable for several on-the-record comments from various former Blazers’ players and employees. They’re not quite as strong as the comments from the anonymous sources, but they’re significant for indicating that there were troubling issues that people are willing to publicly put their names behind. Here are some examples of that, from former players Antonio Harvey (also a radio analyst for the team from 2005-16) and Dan Dickau (also a player development coach with the Blazers pre-Olshey, and one who got lit up by Olshey for looking for a job on the business side with the team when he didn’t think he’d get a continued coaching role):

“I know it happened because I heard people talking about it,” Harvey said. “But I never saw it happen. I can’t say I saw him do this to this person. What I can tell you is, I heard a lot of rumblings about how he wanted to control and manipulate. If you didn’t do what he said, he would just completely fly off the handle. He hated to be questioned. He hated to be second-guessed. These are all the things that I consistently heard coming from people who dealt with him on a day-to-day basis.”

…“In an aggressive tone, he calls me and he starts cursing me out telling me, ‘Why would you (expletive) go behind my back,’” Dickau recalled on his podcast. “‘You went behind my back and tried to play politics with the email that you sent. You former players don’t get it. You don’t work. You’re lazy. You’re going to have a hard time finding a job in the league ever again if this is the way you act because you’re a former player, and you’re very lazy.’”

The details of what exactly Olshey did and said are scanty, though, and the team’s decision to be so non-communicative about what they were specifically investigating and what they found is at least somewhat unfortunate. To be clear, fully releasing an investigative report like this isn’t always possible: it at least partly depends on what promises of anonymity/non-publication were provided during the investigation. And there are problems with releases that aren’t careful in what identifying details they redact; the Chicago Blackhawks’ report release, while generally positive, carried too many identifying details about victim Kyle Beach and made it too easy for people to figure out it was him, as he shared when speaking out publicly about that on TSN.

But there are ways to release a carefully-redacted report that reveal sources’ identity, or at least to release a summary of what specifically the report found. And even without that, you’d think officials would be able to take some questions about a major move like this; even some answers of “No comment” mixed with some answers to things they could address would be better than this blanket “We will not discuss it.”

Sure, we’ll probably get some of those details through reporting and anonymous sources in the end. But that’s likely less comprehensive than an official release of some sort would be. And reporting on these sorts of investigations may miss some important elements by virtue of who’s willing to talk to the media (generally, a smaller subset of people than those willing to talk to investigators) and who isn’t. So the extremely limited information the team is putting out there may limit how much of the actual story the public gets.