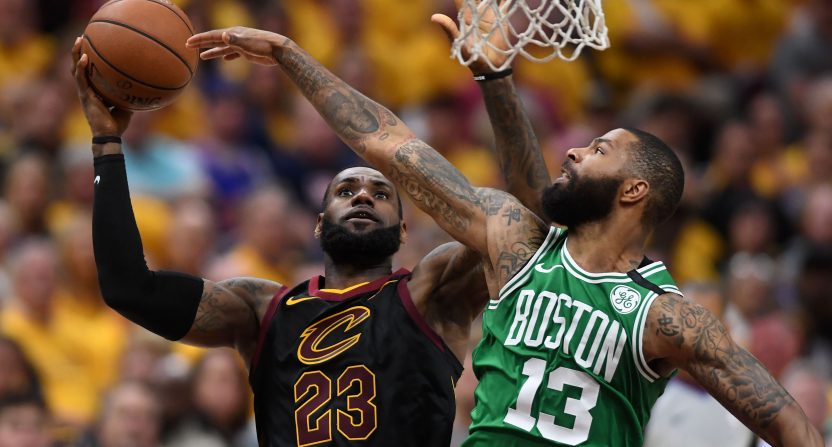 Can the Boston Celtics or Cleveland Cavaliers win a road game in the Eastern Conference Finals? The Celtics — owners of home-court advantage — certainly hope that answer is no, because the Cavs now have the momentum after winning Games 3 and 4 to even up the series 2-2.

Cleveland came away with a 111-102 victory, led as usual by the best player in the world. LeBron James had 44 points (17-of-28 from the field), good for his sixth performance with 40+ points in the playoffs. That’ll do.

The East Finals head back to Boston, where the Celtics are 9-0 this postseason. pic.twitter.com/x9dfA8mUKR

Cleveland looked so much worse than Boston through Game 2 that yours truly wrote, “You can never count out LeBron, but it’s hard to see the Cavs beating the Celtics 4 times in 5 games.”

Well, now it’s absolutely looking possible! Boston’s effort was pretty disappointing the last two games, but it’s also a young team playing in a very difficult road environment and lacking the star talent the Cavs obviously have with LeBron. And the Cavs improved their play greatly across the board.

So, the Celtics basically face a must-win situation for Game 5 in Boston.

If the Celtics were to lose Game 5, LeBron and the Cavs will have won three straight games and get the opportunity to close out the series in Game 6 at Cleveland. The Celtics really, really don’t want that situation.

But if the Celtics were to win Game 5, they know that even if the Cavs win Game 6, Game 7 will be in Boston where the Celtics would enter with a 3-0 series record (in this hypothetical scenario).

The crucial Game 5 tips off at 8:30 PM ET on Wednesday night in Boston.