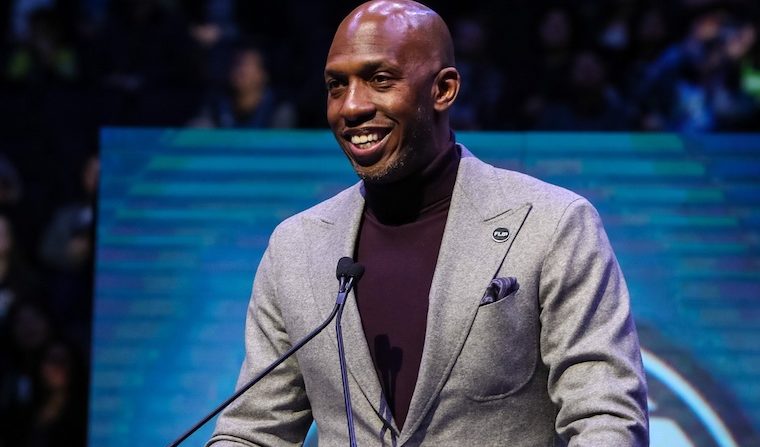 For Chauncey Billups, it seems like more a matter of when, not if, he eventually leaves his analyst position with ESPN to take a general manager position with a NBA team. On Tuesday, he dispelled more rumors of such a move, denying interest of a possible reunion with the Detroit Pistons.

The former NBA star — who played for seven teams during his 17-season professional career — has previously been attached to the GM openings with the Atlanta Hawks and Cleveland Cavaliers, but took himself out of the running in both cases. One key difference is that Billups actually interviewed for both of those openings as well.

That hasn’t happened with the Pistons, but news of the team’s interest in Billups was reported by the New York Times‘ Marc Stein.

Detroit has expressed interest in hiring the former Pistons star Chauncey Billups to work in tandem with Arn Tellem in a totally revamped front office, according to league sources

As Stein mentioned, Detroit envisions Billups working in Detroit’s front office with former powerhouse agent Arn Tellem, who’s now a vice chairman for the Pistons. Tellem would presumably be the team’s president of basketball operations while Billups would serve as the GM.

One big issue with this setup, however, is that the Pistons already have a team president in Stan Van Gundy, who is also the team’s current head coach. But Detroit is playing out what’s become a terribly disappointing season, especially after making a headline-grabbing deal in trading for star forward Blake Griffin. Since acquiring Griffin, the Pistons have gone 9-13 and fallen 5.5 games out of the Eastern Conference’s final playoff spot.

Pardon the Captain Obvious statement, but that’s hardly what Van Gundy and team owner Tom Gores expected after trading Tobias Harris, Avery Bradley, Boban Marjonavic, a 2018 first-round pick and 2019 second-round pick for what they viewed as a superstar boost to their playoff chances.

Van Gundy has one year remaining on the five-year, $35 million deal he signed with Detroit, but rumblings of his dismissal are getting louder. It’s always possible that he could stay on as coach even if Billups was hired as general manager. But Van Gundy’s salary — which ranks among the top five among NBA coaches — is surely dependent on him being team president, and the team’s lack of success during his tenure certainly doesn’t rate such a high paycheck for coaching.

“I’m very happy with the on-air opportunities ESPN has given me to talk about the NBA in the studio & at games. Of course, I love my Pistons & Detroit. But I would never push for a job with any NBA franchise that is not open. That’s not part of my character,” – Chauncey Billups.

However, a NBA source told the Detroit News‘ Rod Beard that there’s “nothing whatsoever” to the rumors of Billups joining the Pistons’ front office. The Detroit Free Press‘ Vince Ellis received a similar reply.

Billups himself denied the rumors while appearing on ESPN’s The Jump.

“That’s flattering — it really is; everybody knows how I feel about Detroit — but it’s 100-percent false. I haven’t spoken to anybody with the organization about the possibility. Actually, I hate when these things come out because that job is not open.

“Stan has done a good job with what he’s doing right now, so it’s unfair that something like that would come out, especially when it’s completely false. I feel for the people involved because they have to deal with that and listen to quotes. It’s just unfortunate.”

That doesn’t mean that Billups isn’t still a candidate for the Pistons’ general manager position. But obviously, some steps have to be taken before that could happen. And it puts Billups in a bad position, looking as if he might be pursuing a job that currently belongs to someone else. The positions in Atlanta and Cleveland were vacant when he interviewed for those openings.

But as Billups said himself, he hasn’t talked to anyone with the Pistons. This is just a report that Detroit has interest. If the team wants to replace Van Gundy, several names are likely under consideration.

Of course, Billups and the Pistons appear to be a nice fit. The guard had some of the best years of his career in Detroit, highlighted by winning a NBA championship and being named Finals MVP in 2004. Three of his five All-Star seasons came while he played with the Pistons. Two years ago, Detroit retired his jersey.

Reggie Jackson currently wears that No. 1 with Billups’ blessing. But that could make for an interesting conversation if Billups ends up running the team.