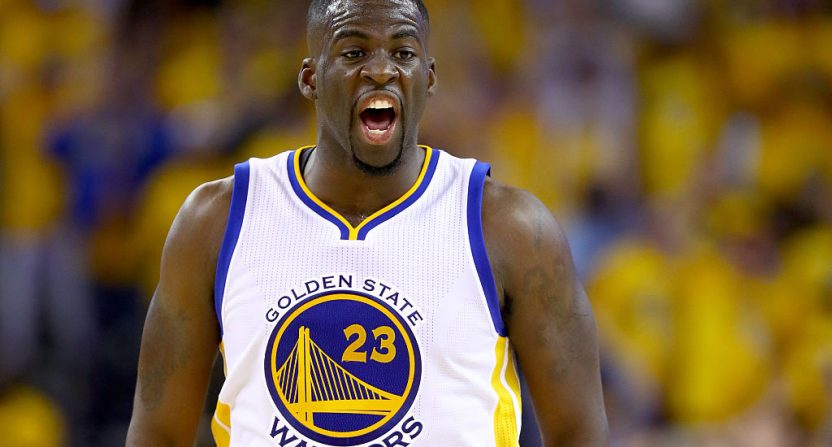 How much trash-talking can Draymond Green do in one day? The answer, unsurprisingly, is a lot. Not only did the Warriors forward blast Celtics big man Kelly Olynyk for being a dirty player and say the Jazz fans in Utah “aren’t very smart,” but he also expressed his disappointment with the Cleveland Cavaliers’ playoff competition in the Eastern Conference.

But Green thinks the Cavs’ opponents in the East — the Pacers and the Raptors, so far — are basically laying down and letting Cleveland run by. Here’s what he told ESPN’s Chris Haynes prior to Game 4 on Monday:

“I thought teams would compete a little harder,” Green said after shootaround on Monday. “I just watched San Antonio-Houston. I like to watch good basketball. When you watch Cleveland play, you’re only watching one side of the good basketball. That’s kind of weak.

The natural follow-up question is what does that say about the Jazz and the Trail Blazers, whom Golden State swept in the first round, if the Warriors are winning by even larger margins? Green had an answer for that:

Green says that even though they’re handling teams with more ease than the Cavaliers, he argues they’re facing stiffer challenges.

“Nah, but I think Utah is still playing good basketball,” he said. “Regardless if they win or not, I think we’re a better team. But at the same time, they still play a good brand of basketball.”

Of course he’d say that. Doesn’t mean it’s true. Doesn’t mean it’s false, either. Paul George put up some impressive performances for Indiana in the first round as the Pacers never lost by more than two possessions. Cleveland’s second round series against Toronto was much more lopsided, but the Raptors were also on shorter rest and played without point guard Kyle Lowry in Game 3 and Game 4.

To Green’s point, Raptors top scorer DeMar DeRozan said after the series’ final game that they would have won the series if Cavs star LeBron James played for Toronto instead. While that statement gives a lot of respect to LeBron, it also betrays how overmatched the Raptors felt in this matchup.

DeMar DeRozan after Cavaliers swept Raptors: "If we had LeBron on our team, too, we woulda won." pic.twitter.com/UEgukLJm1S

Barring a major upset, the Warriors and the Cavs will meet next month in the NBA Finals for the third straight year. Golden State won that matchup in 2015, but Cleveland famously came back from a 3-1 deficit to win in 2016.

With the Spurs losing point guard Tony Parker and the Rockets losing power forward Nene, the Warriors’ potential opponents are considerably weaker. And with the way the Cavs are rolling in the East behind monster performances from James, it’s conceivable that both teams could enter the NBA Finals with undefeated postseason records.