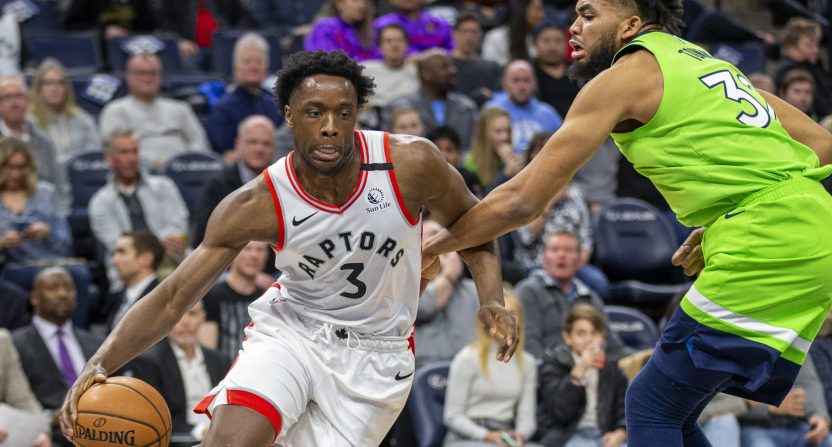 There might not be a more defined tier in the NBA than the glut of Eastern Conference teams battling for spots from second to sixth. Behind the dominant Bucks by eight games and ahead of the middling seventh-place Magic by 7.5 games, there is a group of five teams within two games of each other.

In order of their current standing: the Heat, Raptors, Celtics, Pacers, and Sixers are all considered anywhere from solid playoff teams to elite contenders. The battle they will wage for second in the East is a crucial one. Finishing second likely results in a first round matchup against the seventh-place team, a much easier series than one against a member of the 2-6 seeds. Also, there should be desperation to get out of fourth and fifth, because that would mean a second round matchup with vaunted Milwaukee. For a team like the Sixers, having to face Giannis Antetokounmpo in the second round would be cruel.

Watching these five teams and how their battle plays out will be one of the most interesting standing storylines of the NBA’s second half of the regular season. The knowledge that all five teams are legitimately good helps. It’s clear that the Eastern Conference has gained real ground on the West this year, and should no longer be dismissed off-hand as the “Junior Varsity” conference.

Let’s look at the five teams and see how things are going for them, with a focus on how they match up with their counterparts:

As it stands, Miami occupies the second spot in the East. They’ve declined a bit from their hot start; their net rating has dipped 4.5 points since December 15, and they’ve lost games to the Magic, Nets, and Knicks in January. But Jimmy Butler and Bam Adebayo remain likely All-Stars, and the Heat’s starting lineup, with the third-most minutes in the league among five-man groups, is plus-13.0 per 100 possessions.

The best thing about watching this Heat team is the balance and cohesion. They look like a team built to play together, which isn’t even really the case: Kendrick Nunn, Duncan Robinson, and Tyler Herro’s breakouts were pretty much out of nowhere. Nunn, Robinson, and Herro have been prominent contributors as shooters and off-the-bounce creators who complement Butler and Adebayo perfectly.

Nunn went off for 33 points on 13-18 shooting in a win over the Spurs on January 15. He is a pure scorer, capable of putting the ball in the hoop from anywhere on the court. His shooting splits are diverse, and they indicate an ability to hit from anywhere. He puts up four catch-and-shoot threes per game (hitting them at an acceptable 34.9 percent), flying off screens with a Korver-like determination. When opponents close him down, he finds his shot, whether that means a midrange effort, a floater, or a shot at the rim:

Miami move the ball so well because they have players with various perimeter skillsets who can all shoot, drive, and create their own shots. The actions they run on offense are meant to move the ball and generate secondary passing opportunities. They’re tied for the league lead in possessions that end with cutting action, and they’re third in hand-off frequency, scoring a second-best 1.08 points per possession on such plays.

Everyone is a plus passer. Butler is a savvy cutter, and a clutch star who gets buckets when needed. Adebayo is strong and athletic enough to face up on the perimeter and outfox bigger defenders or outmuscle smaller ones. With Robinson running around the three-point arc as a dedicated sniper, floor spacing is rarely an issue, particularly when he plays with either Nunn or Herro.

When Justise Winslow comes back from injury, they’ll add a piece who could step in at power forward when Adebayo plays center, which he often does during clutch minutes. The Heat could look to add either that kind of small-ball power forward or a ball-handler who can shoot — Butler is below 30 percent from deep.

Meyers Leonard, their starting center, plays only 20 minutes per game. Big men like Joel Embiid or Domantas Sabonis could be too much for Adebayo, who is only 6-9. Spoelstra might have to trust Leonard to play bigger minutes at times.

Miami has the star power, in Butler, and the outside shooting to threaten any playoff team. They are hanging on to the second seed by a thread right now.

I wrote about the Raptors back in early December, prior to a string of costly injuries, back when they were one of the best stories in the NBA. Toronto have stayed afloat since, and almost everyone is back now. The defending champs are 26-14, led by Kyle Lowry, who plays a ton of minutes and remains the engine.

Much of what I wrote a couple of months ago holds true. Pascal Siakam is the first option star. His injury shouldn’t keep him out of the All-Star game, and if he maintains this pace the rest of the season, he will be in the All-NBA conversation. The depth continues to excel. Even as guys return from injury, Nick Nurse is still getting good minutes out of Patrick McCaw, versatile defender Rondae Hollis-Jefferson, all-purpose shooting guard Terence Davis, and lengthy finisher Chris Boucher.

With Marc Gasol and Serge Ibaka available, the Raptors have a pair of big men who can fill center minutes and pop for easy two’s. In a small sample with both Gasol and Ibaka on the floor, Toronto have suffocated teams defensively.

The healthy Raptors will be in the race for the second seed.

Like Miami, the Celtics have taken a slight downturn in January. They’re 4-6 this month, with losses to the Wizards, Spurs, and Pistons. A flaw that has been masked for much of the season has shone through: there isn’t a top-15, elite player driving this team. The promising start heightened expectations, pushing the Celtics nearly into the championship conversation, but the recent downturn reminded us why Boston wasn’t considered a contender heading into the season.

Still, the Celtics are set up for the future as well as any team in the league. Jayson Tatum and Jaylen Brown are 21 and 23, ripe for continued growth. Brown has taken a big leap this year into the All-Star conversation, and Tatum has about the same case to join Kemba Walker in Chicago. Tatum could grow into that elite first option over the next couple of years. Boston remains an attractive free agency destination, and Walker is the perfect point guard to orchestrate the Celtics in the future.

Right now, Gordon Hayward might be the biggest variable in Boston’s playoff success. If Hayward plays as well as he did prior to the hand injury he sustained earlier in the season, the Celtics would have another shot creator on the wing. With Tatum, Brown, and Hayward intermittently orbiting Walker, Boston would present a matchup nightmare for many NBA teams.

It is certainly possible to imagine the Celtics navigating their way to the Eastern Conference Finals. If the Celtics finish second and the Sixers finish third or sixth, Boston will avoid both Philadelphia and Milwaukee until the Conference Finals. The Sixers are a nightmare matchup for the Celtics, but with the defense of Marcus Smart and Brown, the Celtics could reasonably be confident in a series against the Heat.

Defying expectations, the Pacers are 28-15. Malcolm Brogdon is on the outskirts of the All-Star conversation. He is taking on a bigger role than he ever did in Milwaukee, shooting more shots per game and upping his usage rate to 26.0 percent. His shooting percentages are down, but he’s the best free throw shooter in the league and he’s averaging more than seven assists per game, ninth in the league.

Brogdon is one of the most frequent pick-and-roll ball-handlers in the game, per NBA.com, and among such high-usage ball-handlers, he is in the 78th percentile by points-per-possession. The Pacers score 0.95 points per Brogdon pick-and-roll, the same number as the Clippers with Kawhi Leonard and slightly better than the Lakers with LeBron James.

Domantas Sabonis is his most frequent pick-and-roll partner, and while we don’t have access to the data for Brogdon-Sabonis pick-and-rolls, we can assume it is favorable. Sabonis is the most frequent roll man in the entire league, and the Pacers average 1.14 points per possession when he acts as the roll man.

They are an effective combo. Brogdon is a quick downhill mover who knows how to slow down and contemplate his options. He’s willing to pass early and let Sabonis do what he does best: bully defenders under the hoop:

Sabonis has an All-Star résumé. He’s averaging 18.0 points and 13.0 rebounds, along with a respectable 4.4 assists, on a 53.5 percent effective field goal percentage. The Pacers give up 103.4 points per 100 possessions when Sabonis is on the floor, and 107.9 when he sits. They are six points better offensively with Sabonis. His net rating of 9.2 is by far the best of any Pacers rotation player.

The question of how Indiana plays with Sabonis and Myles Turner together has taken on less importance this season. With both on the floor, the Pacers have a net rating of 6.0.

With solid pieces surrounding Brogdon and Sabonis, including streaky (but effective!) scorer TJ Warren, starting shooting guard Jeremy Lamb, and the emerging Holiday brothers, the Pacers are set up well to battle for Eastern Conference seeding.

Oh, and Victor Oladipo’s coming back soon. That will help.

It feels odd to say that the Sixers, with incredible on-paper talent, are sixth at the time of this writing. They are a bizarre 20-2 at home and 8-14 on the road. The Bucks would prefer that the Sixers not finish fourth or fifth, because Philly presents the most difficult Eastern Conference matchup for Giannis and Co. Since their impressive Christmas Day win over Milwaukee, the Sixers have slowed back to a lower gear.

They’ve been without Joel Embiid for the past six games. Without Embiid on the floor this season, they have a net rating of just 0.9, compared to 6.7 when he plays. Their defensive rating in 963 minutes with Embiid on the court is a ridiculous 99.7. Embiid, despite his well-known lack of regular season intensity, has a legitimate Defensive Player of the Year case.

As ever, the Sixers are trying to figure out how to effectively pair Embiid and Ben Simmons. Much of their offense with Embiid runs through post-ups — Embiid posts up 8.0 times per game, the most in the league by a good margin. His 1.12 points per post-up possession is the highest among those with high-volume plays.

Tobias Harris provides crucial scoring punch, averaging 19.4 points on efficient shooting. Al Horford has shown his age some, but Philly are better with him on the floor, and he’s an important part of the Giannis Wall. Simmons is a sure All-Star, playing top-tier perimeter defense and averaging 16, 8 and 8. As well as the Bucks have played this season, the Sixers might have the best chance to beat them in a seven-game series.