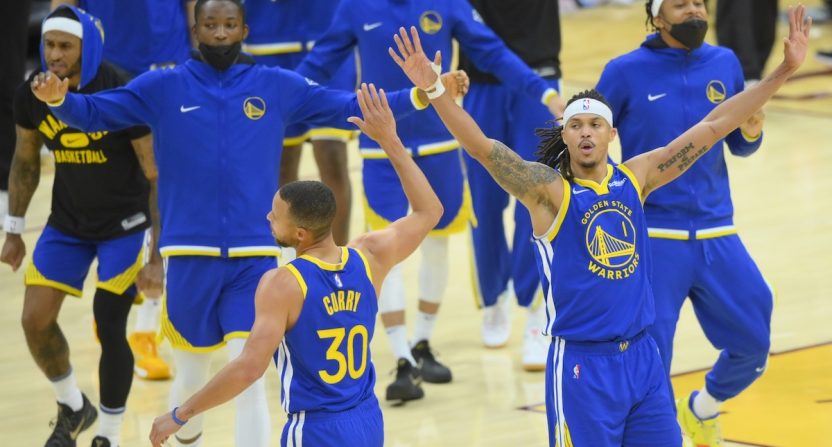 It’s early. A lot can change between now and April. But right now, the Golden State Warriors look like the most terrifying force in the NBA. Oh, we expected them to be good — just not this dominant, this quickly. Golden State (15-2) is pulverizing the competition and Klay Thompson isn’t even back yet.

Most thought the Warriors would simply try to stay relevant until Thompson’s return, possibly as soon as Christmas. But with the way they’re playing, Golden State might be able to afford resting him a little bit longer. In the NBA’s most competitive division, the Warriors have the league’s best record. Not the defending Western Conference champion Phoenix Suns. Nor the preseason West favorite L.A. Lakers.

The last time Golden State was a legitimate contender, it fell apart during the 2019 NBA Finals as Kevin Durant and Thompson suffered catastrophic injuries. Once Durant left for Brooklyn, the future seemed murky at best. All Golden State has had going for it in recent seasons is Stephen Curry’s sharp-shooting excellence. A one-man show with no backup.

It looked like Golden State’s title window might be closing. But suddenly, it might be as wide open as it has ever been. The Warriors’ average scoring margin this season (+13.1) is better than any of their championship teams and better than the club that set an NBA record with 73 victories.

The highlight of the season: last week’s 117-99 beatdown of the Brooklyn Nets at Barclays Center. Curry finished with 37 points in under 30 minutes.

These Warriors resemble Steve Kerr’s early teams. They lead the league in scoring (114.2 per game), rank second in offensive efficiency, first in defensive efficiency, first in 3-point baskets per game (15.2), and first in assists per game (29.3). Golden State shares the ball so methodically, carving up defenses with relentless precision. It’s not just about Curry, but he certainly helps.

At the age of 33, Curry is gunning for his third MVP trophy. His plus/minus is an absurd NBA-leading +225. Nobody else is even close. He’s on pace to break his own record for 3-point baskets in a single-season. Over the past six games, the NBA’s second-leading scorer (28.4 per game) already has four games with nine 3-point baskets.

How insane is that? Curry has 55 3-pointers over his past 10 games. The San Antonio Spurs’ top two leaders in 3-point baskets (Devin Vassell and Doug McDermott) have combined for 54 treys total this season.

“When I say Steph is competitive on a lot of different levels, that’s kind of what I mean,” Kerr said on San Francisco’s “Damon & Ratto” radio show. “He finds ways to motivate himself and it’s not fake. It’s real. He wants to win a championship. He wants to beat the best teams. He wants to let other players in the league know that he’s still got it.”

Curry has had help. Last year, he finished third in MVP voting and his team missed the playoffs. The Warriors have improved dramatically despite not getting much from 2020 top draft pick James Wiseman, who has yet to play, and little from rookie first-rounders Jonathan Kuminga and Moses Moody.

Golden State is getting meaningful contributions from a roster many didn’t think was all that great outside of Curry, Thompson and Draymond Green. Andrew Wiggins is shooting a career-best 49.4 percent. Jordan Poole is scoring a career-best 18.4 points per game. Guys like Gary Payton II and Otto Porter are playing valuable minutes off the bench. And of course, bringing back 2015 NBA Finals MVP Andre Iguodala helps.

On The Lowe Post podcast, Sports Illustrated’s Howard Beck made an interesting point about the Warriors’ style of play. Golden State’s ball movement keeps everyone involved in the offense. That kind of chemistry appears to be paying dividends.

“I believe that when guys are involved and are feeling part of it all the time, they’re going to perform better, especially in crunch time,” Beck said.

There are reasons to tap the brakes. Golden State has played the league’s easiest schedule. The slate will be harder after the All-Star break.

And when you look at the Pacific Division, things could get interesting over the next few months. The Suns (13-3) have won 13 in a row. LeBron James has just returned from injury for the struggling Lakers (9-9). And who knows if/when Kawhi Leonard will be back for the L.A. Clippers.

However, if Thompson can return and be something close to what he was before the injury, good luck trying to stop the Warriors.