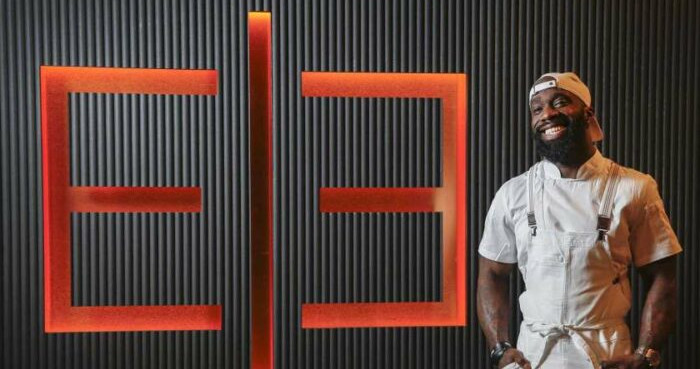 In the most recent example of terrible timing, James Harden has a restaurant set to open in Houston on January 22. That will be nine days after his trade to the Brooklyn Nets Wednesday. Here’s more on Harden’s “Thirteen” restaurant, featuring chef Tobias Dorzon (seen above with the restaurant logo in a photo from Karen Warren of The Houston Chronicle) from Amy McCarthy of Eater Houston:

The restaurant is set to make its debut on January 22, according to the Houston Chronicle, inside the former Mr. Peeples space at 1911 Bagby Street. The restaurant will be helmed by chef Tobias Dorzon, a former professional football player who’s also worked as a personal chef, cooking for star athletes like Tyrod Taylor DeSean Jackson, and Lebron James.

As previously reported by Eater, getting into the restaurant business is sort of a natural fit for Harden, who’s frequently spotted at hotspot Houston eateries like the Turkey Leg Hut, La Griglia, and Taste Bar and Kitchen. In a 2019 interview, Harden shouted out steakhouse Vic & Anthony’s as his favorite Space City restaurant.

As far as the menu at Thirteen is concerned, look forward to decadent, upscale riffs on comfort food dishes like fries spiced with Old Bay and drenched in Maryland crab cream sauce, deep-fried red snapper, and a Harden-inspired dish called the Sun Devil, which involves roasted oysters topped with creamed collard greens and candied bacon.

Greg Morago of the Chronicle has more on that in the above-linked piece, which was posted last week:

Harden has entrusted the kitchen at Thirteen – one of Houston’s most high-profile restaurant openings this year, and surely one to make national news given The Beard’s celebrity – to a chef who is unknown to the city’s tight-knit dining community. But make no mistake, chef Tobias Dorzon is just as determined as his baller boss to make Thirteen a splashy success.

The 36-year-old Maryland native may not be a familiar name among local chef-obsessed foodies, but he’s been building his own brand for years as a former pro athlete turned celebrity chef. After several years playing in the NFL (Tennessee Titans and Tampa Bay Buccaneers) and the Canadian Football League, Dorzon returned to the Washington, D.C., area to begin a catering business in 2014, followed by a food truck and eventually a restaurant.

Dorzon’s shift from football to fine dining was not surprising to his professional athlete friends who had been admiring his culinary posts on Instagram since 2015. Soon, he was tapped as personal chef to elite athletes. His first celebrity sports client was former Washington Redskins wide receiver Santana Moss. That led to cooking for NFL and NBA players including Tyrod Taylor, DeSean Jackson, Trent Williams, Jameer Nelson, Jeff Green and Jarrett Jack, as well as celebrities including Chris Brown, Kevin Hart, and Snoop Dogg. He’s cooked for Lebron James, too.

For the record, Dorzon went by Bloi-Dei Doizon during his time as a running back, which included a college career at Jackson State, brief time in the NFL, and the 2012 season in the CFL with the Winnipeg Blue Bombers. In 2018, CNBC profiled him and his catering business:

“Cooking was something I always loved,” he tells CNBC Make It. “But it wasn’t until I ventured off and stopped playing [sports] that I realized I loved it more than football.”

After two years in the NFL and Canadian Football League, Dorzon turned his passion for cooking into a full-time career. His catering company, Victory Chefs, provides services to businesses in the Washington, D.C. area and to professional athletes and celebrities across the country.

…“Finishing culinary school and working in an actual restaurant making $38,000-$40,000 a year was a bit hectic for me,” says the 33-year-old. “It came with a bit of a shock, but I knew culinary was something I wanted to do and I knew that with the drive and determination I had that something was going to come from it.”

After working at several D.C. restaurants, including the Ritz-Carlton’s, he quit his restaurant job to launch his own catering company, Victory Chefs, in 2014. Dorzon used his Instagram account as a marketing tool to showcase his culinary creations while providing catering services to local residents and businesses.

It’s cool that Dorzon is now getting a chance to shine as the chef of a restaurant. But it’s certainly unfortunate for him that this restaurant, developed so extensively to feature Harden (with its name even coming from Harden’s number with the Rockets), is now opening after Harden leaves town. And it’s coming after an incredibly acrimonious divorce, which saw Harden even saying the Rockets were “just not good enough” and “something that I don’t think can be fixed.”