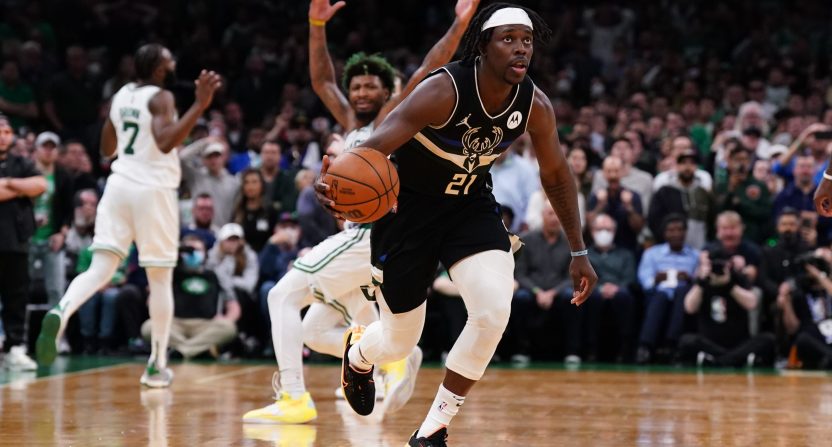 For most of Game 5, it seemed like the Boston Celtics would defeat the Milwaukee Bucks and take a 3-2 lead in the series. But the Bucks and specifically Jrue Holiday had other ideas.

While Boston led by as much as 14 in the final quarter, Milwaukee chipped away at the deficit to make the game close, then completely dominated the finish. With the Celtics leading 105-102, Holiday drilled a three to tie the game with 42.4 seconds left.

JRUE HOLIDAY 3 TIES IT! WHAT A GAME! 🏀 pic.twitter.com/EpFdTrHtXH

The Celtics regained the lead on the next possession when Jayson Tatum was fouled and made both free throws. Giannis Antetokounmpo was fouled and sent to the line on Milwaukee’s next possession. He made his first free throw but his second attempt missed the mark. Fortunately for Antetokounmpo, Bobby Portis was there for a heads-up rebound and putback.

Marcus Smart drove to the hoop on the next possession to try to give the Celtics the lead back. But Holiday was on the spot again. He not only blocked the shot but secured the loose ball and threw it off of Smart as he was falling out of bounds, giving the Bucks the ball.

Boston had one more chance to tie the game after Milwaukee’s Pat Connaughton knocked down two free throws, but Holiday again made a fantastic defensive play on Smart, stealing the ball to secure the victory.

Jrue Holiday with the defense AGAIN!

Holiday’s performance down the stretch was otherwordly, and something that hasn’t been seen in the NBA playoffs for a long time.

Jrue Holiday is the first player over the last 25 postseasons to record a block and a steal inside the final 10 seconds of the 4th quarter of a playoff game. pic.twitter.com/D9Mpu5jr9C

The NBA world was effusive in its praise of Holiday and the Bucks, in general.

Holiday trying to send the Celtics on holiday.

That is one of the most impressive wins I seen from the Bucks ever. On the road to come back like that is tuff

Jrue best guard defender in the league bar none.

Jrue Holiday out there playing Chess not checkers against the the Defensive Player of the Year and the Celtics.

Just absurd defense from Jrue Holiday down the stretch. And he hit the game-tying 3. Such a great two-way player. https://t.co/Ejcxl1P0nH

Of course, there are two sides to every story. And while the Bucks get to bask in the glory of a stellar come-from-behind win, the Celtics have to deal with an absolutely crushing loss on their home court.

WHAT A DISASTER FOR THE BOSTON CELTICS.

The #Celtics could've and should've won that game. They were outplayed. #Bucks were better. More aggressive. C's got sloppy and complacent. Absolutely brutal.

This series is like the ECF in the bubble against Miami. #Celtics feel like the better team. Play like it for long stretches. But still somehow find ways to lose.

How did the Celtics lose that game wow!

Boston now has a monumental task to overcome. Not only will the Celtics have to find a way to shake this loss and off win another game in Milwaukee, they’re now forced to overcome a lot of NBA history.

The series isn’t over. But it’s trending in a severely negative way for Boston and a great way for the defending champions in Milwaukee.