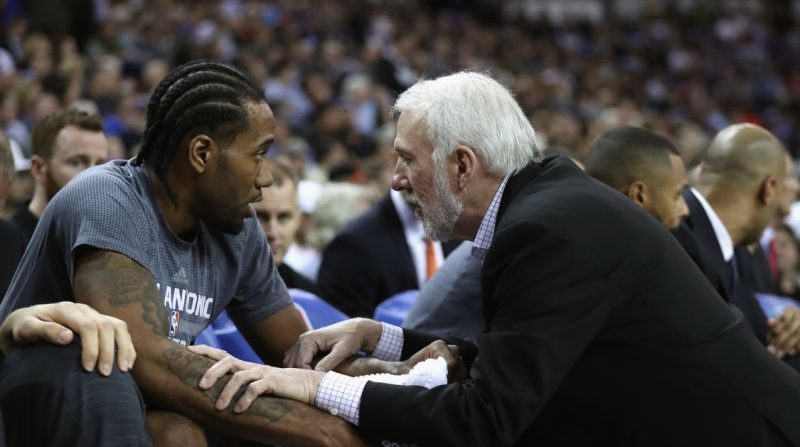 It looks like an evidence photo from an FBI sting.

Instead of an informant and suspect, it was Gregg Popovich and Steve Kerr. The picture that launched a thousand tweets might have captured a purely innocent moment: a pair of highly successful NBA coaches simply having dinner. Or it could have been the hatching of a Machiavellian plot

when you gotta destroy the robot you built https://t.co/xpF2M4w7op

This NBA Finals, pitting the Golden State Warriors vs the Toronto Raptors, will bring Popovich’s greatest failure to the national stage: Kawhi Leonard competing for another NBA championship in a different uniform. There remains an element of mystery surrounding how his relationship with the San Antonio Spurs soured. Neither party has given a complete and believable answer. Leonard is the NBA’s least talkative player. And Popovich… is well Popovich.

Popovich generally has no use for the media. He doesn’t care to answer questions he considers stupid, useless, and obvious. You can bully your way out of any reporters’ scrum when you have the hardware. He’s won five NBA championships and is on the Mount Rushmore of pro basketball coaches along with Red Auerbach, Phil Jackson, and Pat Riley.

But winning multiple titles doesn’t make you immune from criticism. The greatest leaders still have moments of regret and shortcomings. Coaches crave control but they must acquiesce to that fact that many things are beyond their jurisdiction.

Popovich isn’t the first and won’t be last to endure a career-altering split with a player.

In 1999, Jackson was hired to fix the Shaquille O’Neal and Kobe Bryant relationship. It worked for his first three seasons, with the Los Angeles Lakers winning championships. That duo could’ve won more, but not even the Zen Master could stop the Shaq-Kobe dynasty from imploding. O’Neal was traded to the Miami Heat where he won his fourth title in 2006.

Riley, The Winner Within, helped orchestrate the greatest free-agency haul of all-time when he got LeBron James and Chris Bosh to join Dwyane Wade in Miami in 2011. The Big Three went to four straight NBA Finals winning a pair of titles. But for all of Riley’s influence and power, he couldn’t prevent LeBron from returning to Cleveland where he won his third championship in 2016.

Popovich’s shame is worse. The Kobe-Shaq union was dysfunctional before Jackson arrived. Riley can blame free agency, and you can’t fault LeBron from wanting to return to his home state of Ohio. Popovich has no one to blame but himself. Kawhi Leonard’s return to the NBA Finals as a member of the Toronto Raptors reveals an uncomfortable truth:

Leonard was a homegrown talent that Popovich developed into an unprecedented force of nature. He was the heir apparent to an aging Duncan. The guy who was going to bridge the franchise from one era to another. He solidified his status with a Finals MVP performance in 2014. When Duncan retired in the summer of 2016, the torch was passed.

Without Duncan, in 2016-17, the Spurs went 61-21 for the league’s second-best record. In Game 1 of the Western Conference Finals, Leonard propelled the Spurs to a 78-55 third-quarter lead at Golden State lead before rolling his ankle. He left the game. The Warriors stormed back to win 113-111. Leonard sat for the rest of the series as Golden State swept its way to the NBA Finals and eventually another championship.

Popovich had no way of knowing that this was the beginning of the end.

Leonard missed all but nine games the following season due the most perplexing quad injury in NBA history. There was reportedly tension over Leonard’s health and availability. According to one report, Spurs players pressured him to return for the playoffs last year. Leonard’s uncle lent credence to that report by recently saying there was a “lack of trust” that led to irreconcilable differences.

In a league where the players wield considerable power, Leonard forced his way out of San Antonio. The Spurs did well enough. Last summer, they sent him to the Eastern Conference and got All-Star guard DeMar DeRozan is return. DeRozan is a very good player who had a nice season for the Spurs.

But he ain’t Kawhi. No one is. Leonard is the NBA’s premier two-way player, excelling at offense and defense. His freakishly large hands, athleticism, and strength make him unstoppable. This postseason, Leonard has been Thanos with the Infinity Gauntlet.

Leonard has been everything Toronto has hoped for in leading the franchise to its first NBA Finals trip. Watching this all unfold must be a depressed Popovich. Would he give away inside information on stopping Leonard? No one knows him better. But perhaps Popovich was simply drowning his sorrows away with Kerr.

Everyone needs a drinking buddy.