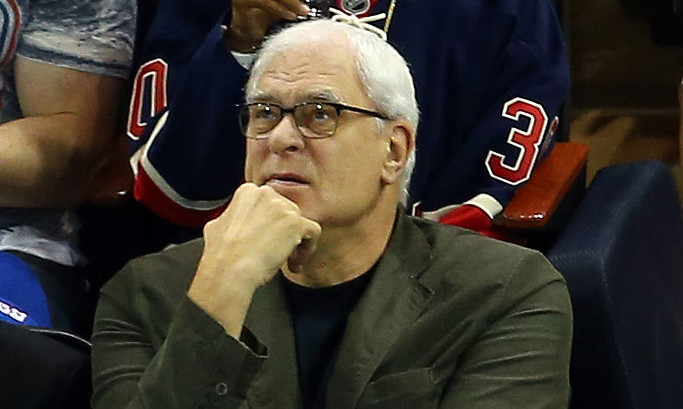 The New York Knicks have played six games this season, but it appears Phil Jackson is already seeing reason to be upset about how the Knicks are playing on the court under new head coach Jeff Hornacek.

Jackson, who has quite a collection of NBA championship rings, is reportedly upset with the lack of a triangle offensive system in place on the court.

Hornacek has tried to speed up the pace of the Knicks offense in the early going this season, using the fundamentals of a triangle-based system without going all in on the foundation. Hornacek is trying to find the offensive system that works best with the roster he has to work with, which includes Carmelo Anthony, Derrick Rose, Kristaps Porzingis and Joakim Noah.

Hornacek is trying to implement more of a half-court offense in an attempt to create scoring opportunities earlier in their offensive possessions. So far, it has led to mixed results with the Knicks ranking 13th in the NBA in offensive efficiency, but ranking last in the league in scoring defense.

Clearly, either this is not working or the Knicks are still trying to find their identity with an offseason roster makeover under a new head coach. Is six games early enough to hit the panic button? Is Jackson expressing concern a little prematurely?

Phil Jackson needs to let go of the triangle and the players need to stop looking for excuses for having the worst defense in the NBA.

You gotta give Hornacek a damn chance, let it breathe. We aren't even 10 games in @PhilJackson11 ..screw the triangle

It turns out, Jackson isn’t the only one frustrated with what is happening on the court so far. ESPN reports some players on the Knicks “have expressed displeasure over the offense because they feel it doesn’t suit their personnel.” Yep, the Knicks appear to be in midseason form.

Furthermore, assistant coach Kurt Rambis, who was Jackson’s favorite to take over as head coach, is now in charge of the team’s defense.

As for Jackson, maybe he should keep one of his own supposed quotes in mind for now.