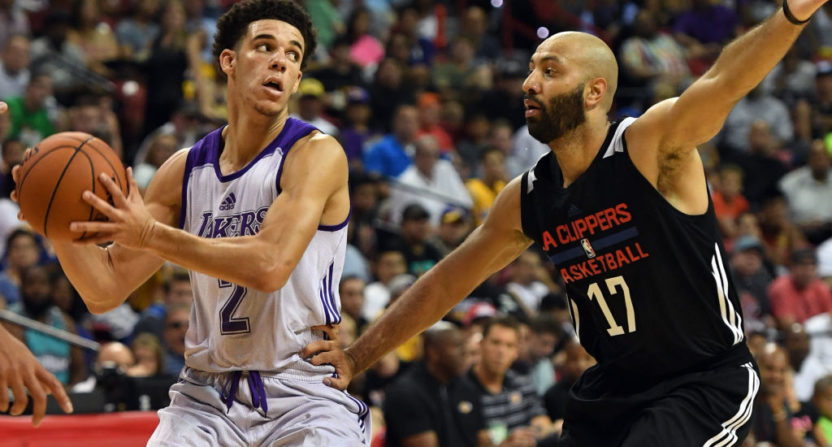 After being selected by the Los Angeles Lakers with the second overall pick in last month’s draft, Lonzo Ball made his highly-anticipated NBA Summer League debut on Friday night in Las Vegas.

The game started off tremendously for Ball, as he threw a gorgeous alley-oop pass to Brandon Ingram on the Lakers’ first possession.

However, things didn’t go so well from there for the UCLA product. Ball scored just five points on extremely inefficient shooting: 2-of-15 from the field and 1-of-11 on three-pointers (and he didn’t get to the free throw line).

He also had five assists, four rebounds, two steals, one block, and three turnovers in 33 minutes of play. Highlights — well, mainly lowlights — of his night:

Now, it’s hard to take much away from a 19-year-old’s first professional game, but not exactly an encouraging start. And especially given how skeptical many evaluators have been of Ball’s ability to shoot at the next level.

After the game, LaVar Ball said that it was his son’s “worst game ever,” but added that Lonzo has already “changed the culture” of the Lakers.

LaVar Ball on Lonzo Ball's debut: "His worst game ever… [but] he changed the Lakers' culture." pic.twitter.com/u8g4OYJiey

LaVar also guaranteed that the Lakers would make the playoffs and that Lonzo would win Rookie of the Year (calling it a “done deal”), because of course he did:

Lonzo will look for more success on Saturday night in Vegas, when the Lakers play the Celtics on ESPN (8:30 PM ET).