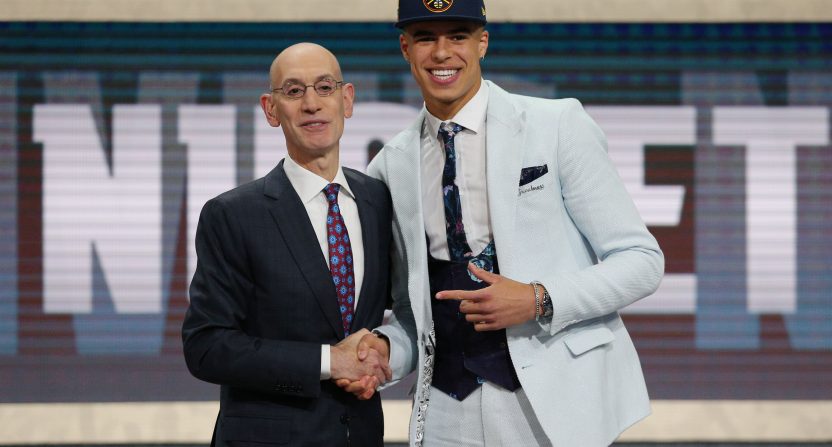 Michael Porter Jr. was viewed as the potential top pick in the 2018 NBA Draft when he entered his freshman year at Missouri, but he suffered a back injury that required surgery and limited him to just three (underwhelming) games for the Tigers. He also suffered a hip injury in recent weeks, but did say the injury was “exaggerated a lot.”

The 6’10” forward was still expected to be a top-10 pick on Thursday night, but surprisingly slid all the way to Denver Nuggets at the 14th pick.

Clearly the injury concerns — particularly the back, of course — scared off several teams. And it sounds like he may not even play in the 2018-19 season.

The Action Network’s Matt Moore says that he “would not expect Michael Porter Jr. to play this season,” based on “what [he’s] heard and how much Nuggets President of Basketball Operations Tim Connelly stressed patience.”

I would not expect Michael Porter Jr. to play this season. It’s early in the process, but just based on what I’ve heard and how much Nuggets President of Basketball Operations Tim Connelly stressed patience, I don’t think he’ll play. Redshirt year.

NOTE: The Nuggets have NOT stated this, Porter said openly on the call tonight he feels ready to play. This is my own interpretation of things.

Denver can afford to slow play this. That could change with evaluation of his condition and as his health improves. https://t.co/roELlCjjrQ

Tim Connelly on MPJ: "I think we are going to be extremely patient, we are going to take the long view with everything we do with him. He was there certainly because there were concerns about the health of his back.”

More Connelly on MPJ: "We are going to be extremely patient and
err on the side of caution to insure he has a long career and not just a productive summer league, but it
is a little premature to answer until our guys get our hands on him.”

Connelly also said it would be premature to put a timetable on MPJ before Denver’s staff has actually gotten to evaluate him off more than the written report.

Again, this is me reading tea leaves.

Based on the comments from Connelly, you can see how Moore reached that conclusion. And if Porter’s health is *that* concerning, it’s easy to understand how he fell to No. 14.

But even if Porter has to sit out a season, it’s still a no-brainer of a draft pick by the Nuggets. The NBA is a star-driven league, and Porter absolutely has star upside, frequently getting comps to Kevin Durant (no one is saying that he’ll be anywhere near as good as Durant, of course, but just that there are similarities in the body and skillset). At the 14th pick, you’re usually talking about finding a role player, so to be able to get a talent that even has a chance to be awesome is an opportunity you can’t pass up.

Maybe Porter is constantly injured and a disappointment, but the Nuggets made the right call to take the swing here, even if he can’t contribute for the team until after the 2018-19 season. If he’s anywhere near the talent he’s capable of being in a few years, nobody’s going to care that he didn’t play a game this season.