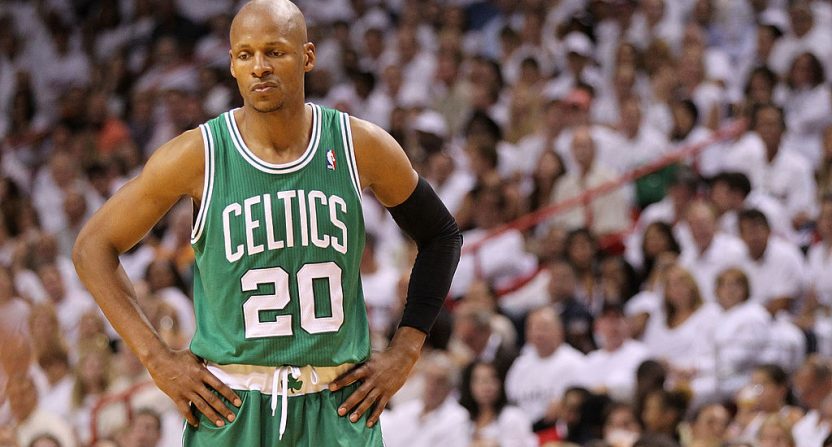 In the summer of 2007, the Boston Celtics formed the first modern day Big 3 in the NBA when Kevin Garnett and Ray Allen joined franchise mainstay Paul Pierce. Unlike today when top-level players leave to play with other superstars through free agency, the Celtics actually did it the old-fashioned way, striking trades with both the SuperSonics and the Timberwolves to build their collection of All-Stars.

Garnett, Allen, and Pierce all etched their names into the record books by winning the 2008 NBA Championship for the Boston Celtics. It was the first championship for all three players as they cemented their status as among the best players of their generation and likely future Hall of Famers. They probably should have won at least one more title together, but they lost against Dwight Howard’s Magic the following year and in Game 7 in another Finals series to the Los Angeles Lakers in 2010. Then they ran up against LeBron James’ Miami Heat and the newer, younger, bigger, better Big 3.

After the 2010-2011 season, the Big 3 Era was officially over in Boston because one of their cornerstone members had followed LeBron to take his talents to South Beach. Ray Allen, perhaps seeing the writing on the wall, left the Celtics to join their arch-rivals and have a better shot at winning a championship with James, Dwyane Wade, and Chris Bosh. And he would go on to win a title with the Heat, iconically saving them in Game 6 of the 2013 NBA Finals by hitting a game-tying three in the closing seconds.

That fact is not lost on the rest of his 2008 Celtics teammates.

At ESPN’s The Undefeated, there is a fascinating story about Allen’s estrangement from the rest of his Celtics championship teammates because of his decision to sign with the Heat. The point guard from that team, Rajon Rondo, is planning a 10 year reunion celebration and the consensus from other members of the squad is that Allen shouldn’t be invited.

“It will be a long story about that, but it is what it is,” Rondo, who plays for the Chicago Bulls, told The Undefeated. “I don’t know a good analogy to put this in. It just wasn’t the greatest separation. It wasn’t the greatest thing that could’ve happened to us as a team, a bond. We were at war with those guys [Miami]. To go with the enemy, that’s unheard-of in sports. Well, it’s not so unheard of. It’s damn near common now.

“The mindset we had. The guys on our team. You wouldn’t do anything like that. It makes you question that series in the Finals … Who were you for? You didn’t bleed green. People think we had a messed-up relationship. It’s not the greatest. But it’s not just me. I called and reached out to a couple of other vets and asked them what they wanted to do with the situation. They told me to stick with what we got [without Allen].”

If you’re a fan of those teams, it might be a tough pill to swallow to know that the relationships amongst the Big 3 (and Big 4 if you want to count Rondo) have soured so much over the years. The bad feelings seem to come from not just that Allen upgraded his Big 3 from Boston to Miami, but the way that he did so. Paul Pierce commented that Allen didn’t return any outreach from his Celtics teammates before making the switch.

“That was a tough situation because we thought it was betrayal,” Pierce said. “That’s why the whole thing evolved like it did with us not talking to him. Ray didn’t really have the best relationship with Rondo anyway. That was nothing. [Rondo], me and Kevin, he didn’t have any talk with us [before his Miami decision].

“I tried to call him and I didn’t get any return calls before he signed with Miami. That was our rival. We were brothers. We came in together. We just wanted a heads-up or a ‘what’s on your mind?’ or something like. Then, all of a sudden, he left. That was the biggest disappointment on my end. Not even getting a callback at that moment.”

Knowing what happened to the Celtics helps to put the ongoing Kevin Durant-Russell Westbrook saga in perspective, doesn’t it?