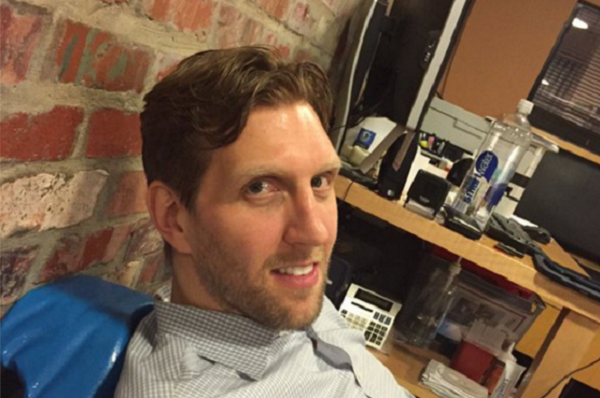 The 2015-16 Warriors’ season ended just a little more than 24 hours ago, but Golden State is already looking towards the future and the upcoming free agency period.

Like virtually every other NBA franchise, the Warriors have free-agent-to-be Kevin Durant at the top of their wish list. But in the likely event he stays with the Thunder, Golden State has a backup plan.

As owner Joe Lacob and general manager Bob Meyers scramble to process the defeat of their supposed juggernaut, the decision makers vowed to be “very aggressive” this offseason, according to Tim Kawakami. That aggression begins with Durant, but Nowitzki is one of the team’s second-tier options that it will try to acquire through free agency or trade.

Nowitzki, also a pending free agent, would be a next-tier discussion for the Warriors, and I’m told they have no idea if he’d be interested in leaving Dallas.

Nowitzki, who turned 38 on Sunday, has said he intends to remain in Dallas, where has spent his entire career… but he has left the door slightly ajar–he’s a little wary of staying in Dallas for a rebuilding process.

The odds of Nowitzki leaving Dallas are admittedly low, but much stranger things have happened in NBA free agency. The forward can opt out of the last year of his deal, which is already something Nowitzki said he plans on doing. However, this would not be to test the free agency waters, but rather allow the Mavericks the most flexibility possible to upgrade their roster.

This may seem like a knee-jerk reaction to the Finals loss, but Kawakami said schemes like this one have been in the works for some while now. The roster has experienced minimal turnover during the last three seasons, but that was almost certain to change this offseason regardless of whether or not the Warriors repeated this year.

The bench, in particular, is prime for a wholesale change–Speights, Leandro Barbosa, Brandon Rush, Anderson Varejao and Ian Clark are all free agents, and all questionable or unlikely to return…

The Warriors also have big decisions to make on restricted free agents Harrison Barnes and Festus Ezeli, who both have a lot of value but flat-lined in the Finals.

They could move on from six or seven of these players, and probably have already made their decisions on least three or four.

It should be an eventful offseason in Oakland no matter who the Warriors sign. Nowitzki would certainly be a nice addition to an already stacked roster, but his loyalties lie with Dallas and it is hard to see that changing anytime soon.