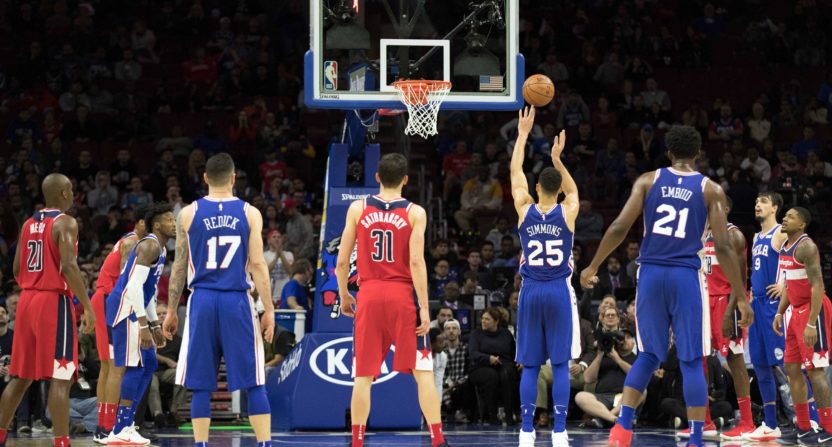 Ben Simmons has been one of the main success stories for the young NBA season. The Sixers, having finally started to convert their process into wins, were demonstrating just how dangerous they can be by serving up a beating to the Washington Wizards Wednesday night.

The Wizards were down by 24 in the third quarter, and decided to attempt to come back by employing a hack-a-Simmons strategy, putting Simmons on the line for 24 free throw attempts in the fourth quarter alone.

Simmons finished the game with 29 free throw attempts — 24 of which came in the final frame, an NBA record — and he made just 15 of them. He also tallied 31 points and 18 rebounds, both career highs.

“When you’re down 24, anything’s in play,” Wizards coach Scott Brooks said after the game. “You’re just trying to do whatever it takes to give us a chance to cut the lead. His free throw percentage is not good at the moment, so it gave us a chance to stop the clock and shoot threes while hopefully they missed free throws.”

While Brooks shouldn’t be faulted for trying to win the game, as that’s his job, it’s important to note that this is really stupid. It’s been stupid dating back to the hack-a-Shaq days, and those days had the advantage of a rhyming nickname. The NBA knows it’s stupid, and even tried to address the problem this past offseason, changing the rules to make fouls off the ball in the final two minutes more penal.

The Shaq fiasco is what prompted the original rule changes in the first place; in the final two minutes of the fourth quarter, a foul away from the ball would result in a free throw and possession of the ball. The new rule change didn’t do much aside from making the extra penalty applicable in the final two minutes of every corner. As we saw Wednesday night, that’s toothless; the Wizards simply waited for the fourth quarter to start and then began fouling with impunity.

Which sucks, because it’s not just against the spirit of the game. It’s also boring as hell.

The fourth quarter of Sixers-Wizards featured 57 free throw attempts, a mere 24 of those by Ben Simmons.

According to my database, the 11 intentional fouls by the Wizards on Ben Simmons tonight were the most in a game since the Rockets fouled Andre Drummond 13 times in January 2016.

So, what should the NBA do? Well, it’s pretty simple, in my opinion, and I’m obviously not alone:

Why not just give the team that gets intentionally fouled the option decline the free throws and take a side out of bounds? #HoopIdea

There we are. To be clear, it’s not perfect, and I think it makes more sense to limit it to off-ball fouls like we saw Wednesday, if only because there’s no way to really distinguish a free throw hack from a legitimate play for the ball. That’s why the distinction currently exists, and it’s a fair one. (This also preserves the late-game fouling to stop the clock and extend the game, which also kind of sucks, but is more in line with the game than grabbing a player’s jersey after he inbounds the ball 94 feet from the basket.)

But the free throws-for-fouls transaction is supposed to help the offense. That’s why it’s there, and it’s currently being gamed to the defense’s benefit. Why should the offense not get the option to simply maintain possession, while racking up the personal foul count on the offending player? This type of thing has an analogue in baseball’s intentional walk, wherein a pitcher gets to avoid a batter by giving up a free base rather than allow him to hit.

Typically, as with free throws, that’s a fair transaction. But in certain situations, it benefits the pitcher more, and that’s dumb! Sports exist to highlight the extraordinary, not for a technicality to be exploited en route to Bryce Harper being denied the chance to hit, or Ben Simmons being forced to head to shoot two free throws per minute in the fourth quarter.

(Yes, you in the back, waving your hand around furiously: NBA players should be able to make free throws. I know that, you know that, everyone knows that. It doesn’t change the general point.)

As with my walk proposal (that a batter should be allowed to decline a walk and force the pitcher to keep throwing until there’s a strikeout or a ball in play), the ability declining free throws would seem to add even more strategy to the game, while removing the incentive for the dumber instances of hack-a-whoever. It’s not that hard, and whatever downsides, it’s still a better system.

Hopefully it gains some traction for the next round of debate, which is probably coming soon; after all, Adam Silver was in the building for Wednesday night’s free throw fest.