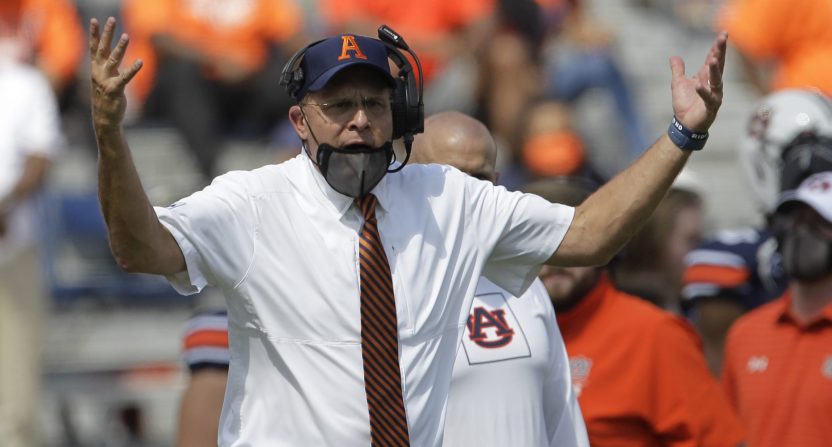 The idea that a pandemic would prevent schools from breaking the bank to move on from an underperforming college football head coach has officially been put the rest.

On Sunday, Auburn announced it has made the decision to move on from head coach Gus Malzahn and will begin looking for a new head coach. Defensive coordinator Kevin Steele was named the team’s interim head coach.

Auburn Director of Athletics Allen Greene announced Sunday a leadership change for Auburn football as Gus Malzahn will no longer direct the program.

After Auburn’s win over Mississippi State on Saturday to close out its regular season with a 6-4 record, it was thought Malzahn would be safe for at least one more year, for a variety of reasons. First, Malzahn was 68-35 overall and 39-27 in SEC play. While there has been a fair share of ups and downs for Auburn under Malzahn, the highs were pretty good, including an SEC title, an appearance in the final BCS National Championship Game, and two SEC West titles in a division dominated by in-state rival Alabama and national powerhouse Nick Saban. But if the bar of success for Auburn is Alabama, then Malzahn was up against it from the start.

This will cost Auburn a few pennies. The school announced it will pay Malzahn the buyout required in his contract, which adds up to a whopping $21.45 million. They are required to pay half of that within the next month.

The buyout for Malzahn is $21.45 million. Half of that is due in the next month. https://t.co/ayXJ4HHCW8

The lesson over the last few days seems to be that if you are going to be fired, or there’s a decent chance you’ll eventually get fired, make sure you get that buyout money.

Jimmy Sexton's kids get the best presents every Christmas.

The ongoing pandemic has certainly taken a toll on collegiate athletics across the board, and even the big revenue-generating conferences like the Big Ten and SEC have been hit hard. But even with revenue distributions likely to be reduced next year, the price of running a top-flight college football program is not something to be done cheaply. With Alabama as a top rival, LSU coming off a national championship, and Texas A&M on the doorstep of the College Football Playoff, Auburn certainly feels as though it can’t get complacent.

Whether it’s a bad look for Auburn to shell out over $21 million, on top of paying its next head coach, is up for the public to decide. But Auburn is making it clear they will spare no expense if it means they can win quickly.

So, who does Auburn go after next to make them a top-tier SEC program again?

There‘s a list of names for Auburn – Cristobal, Napier, Freeze, etc – but you absolutely have to include Kevin Steele, the current DC, with them.

Giving the timing of the coaching change, it would appear Auburn’s brass has a new head coach pretty much lined up and ready to go. In fact, the popular name for the job may be a head coach with former SEC ties. Liberty head coach Hugh Freeze would bring the kind of offensive flair that could thrive at Auburn, and his time away from the SEC has been coupled with his success at Liberty, which has not gone unnoticed by the masses. It may still be a longshot for an SEC program to tempt the NCAA gods with any potential hiring of Freeze given how things ended at Ole Miss, but it might be worth the gamble for the Tigers.

And if Freeze isn’t the guy, could Auburn be the landing spot for another formerly disgraced head coach like Art Briles? Briles has been out of college coaching for a few years now after being ousted at Baylor amid controversy, yet his name continues to surface in various forms on the coaching rumor mill (as it did with Liberty today). We probably have not heard or seen the last of Briles, but hiring him will come with extreme scrutiny and pushback.

Still, Auburn could be willing to weather any PR storms if it means winning with what they could sell as a redeemed head coach. The school will almost certainly be better served by going in a different direction than Freeze or Briles, at least in terms of goodwill and ethical standards, but it also would be a very Auburn move to embrace the NCAA scrutiny as the price for winning.