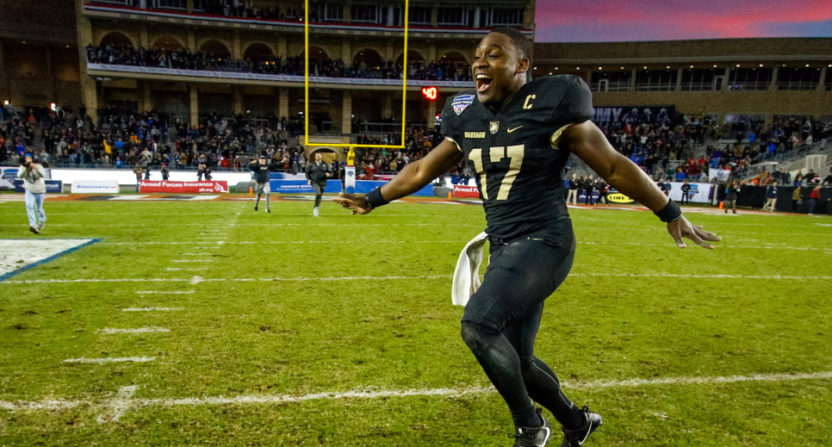 The Army Black Knights have proven all year just how much you can do with a ground game and a defense. The Black Knights were 9-3 heading into Saturday’s Armed Forces Bowl against the San Diego State Aztecs, and they came away with a 42-35 win thanks to a late touchdown, go-ahead two-point conversion, and game-ending interception. But, as in most Army games this year, that wasn’t thanks to the pass. The Black Knights’ use of the triple option means they don’t throw much, and they only attempted four passes on the day (with only three coming from primary quarterback Ahmad Bradshaw), and recorded only one completion for six yards. That gave them a remarkable statistic:

That’s amazing. It’s not like they tried a ton of passes, too; Army only threw the ball 65 times this season, lowest in FBS. And despite the lack of passing, the Black Knights still have a remarkable offense. On Saturday, they picked up 440 rushing yards and five touchdowns on 87 carries, an average of 5.1 yards per carry. Bradshaw alone had 32 carries for 180 yards (5.6 yards per carry) and two touchdowns, an even better showing than the 21 carries for 94 yards and a touchdown he posted in their Army-Navy game win two weeks ago. When you run that much and they still can’t stop you, why not keep doing it? Passes? Where we’re going, we don’t need…passes. Like on the go-ahead two point conversion, where the Aztecs knew the Black Knights were running right up the middle, and still couldn’t stop the fullback dive:

It’s also impressive that Army did this against San Diego State. The Black Knights led all of FBS with 355.8 rushing yards per game this year heading into Saturday’s game, but the Aztecs posted 252.3 of their own (11th). And they had an incredible running back of their own in Rashaad Penny, who ran for 200 yards for the fifth-straight time in a bowl game, finishing the day with 221 yards and four touchdowns on just 14 carries. In fact, maybe that was the problem for San Diego State; they didn’t give the ball to Penny enough, and attempted a whole 10 passes (leading to six completions for 25 yards, but also an interception). Maybe they should have taken a cue from the Black Knights and thrown even less.