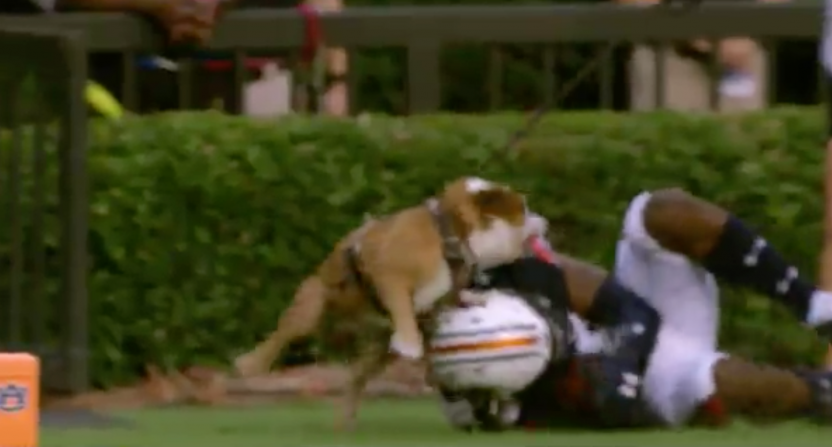 There are few things in college sports better than live mascots, but being a live mascot on the sidelines can be a dangerous thing. On Saturday night, Mississippi State’s bulldog mascot, Bully, found himself in harm’s way early in a road game at Auburn.

Auburn running back JaTarvious Whitlow took off on a 30-yard touchdown run on the first play from scrimmage for the Tigers. But as he made his way across the goal line, he began to slide out of bounds. Standing innocently enough in the line of fire was Bully and Bully’s equally unaware handler.

Fortunately, other than Bully looking a bit shaken in the immediate reaction, there didn’t seem to be too much damage. But just to make sure, Bully was removed from the sideline and taken to a safe location where there were hopefully some good dog treats and chew toys waiting.

While college football fans went into panic mode wondering how this good boy was doing, Bully made sure to tweet and let everyone know he was doing just fine.

Hey Bulldog Nation. Just want everyone to know I am fine!! I’m headed back out on the field now. Thanks for all the tweets and concerns. We love our fans!!! @SECNetwork @espn

What is it with Auburn football players and dogs? In 1996, Auburn wide receiver Robert Baker was nearly on the receiving end of a chomp from Georgia’s Uga V.

And in 2007, Auburn defensive back Jerraud Powers was bitten by a police dog in the back of the end zone in a game against Alabama.

It has been a tough year for bulldog mascots in the SEC in general. During last season’s Sugar Bowl, Georgia’s Uga got a rude hello from Bevo, the live longhorn mascot of Texas.

The moral of the story? If you’re going to bring your dog to the game, be aware of your surroundings.