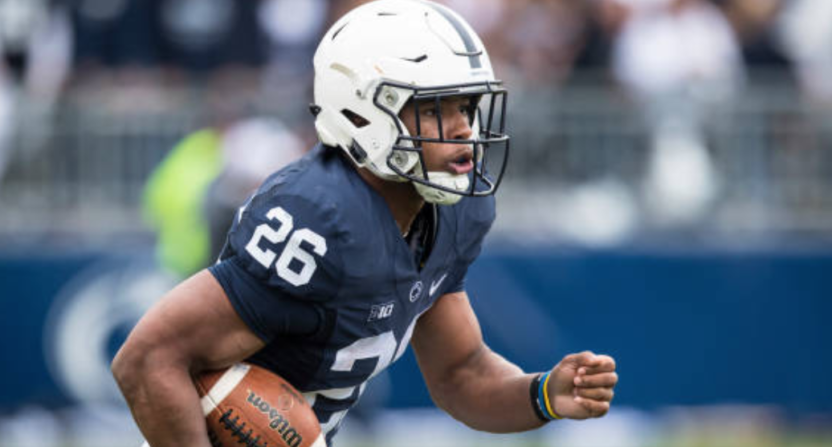 There are always high expectations for the Big Ten every college football season, with a cavalcade of star coaches, big-name recruits and the conference’s own brand. While quite a bit through the first six weeks of the season has gone according to form, there have been some great surprises and a few disappointments mixed in.

Where does that leave the Big 10 as October really comes into focus?

Penn State’s Saquon Barkley is ridiculous and a Heisman Trophy front-runner. With him and Trace McSorley, the Nittany Lions are still favorites for the East. Wisconsin with a punishing defense and Alex Hornibrook are beginning to run away with a weaker than expected West division. And even though Ohio State has that tough loss to Oklahoma on their resume, they’ve torn through everyone else with the rise of the freshmen sensation J.K Dobbins.

No one really knew what to expect from Michigan State and Mark Dantonio after a disastrous 3-9 season last year and a host of offseason controversies and personnel shuffling. Though they had a tough loss against Notre Dame, they’ve rebounded solidly and have already improved on last season’s win totals, including an upset at the Big House over Michigan. The Spartans will have something to say about who wins the East the rest of the way, as they have a home game against Penn State and a trip to Ohio State left on their schedule, and the program looks to be solidly back on track.

Purdue’s rise under Jeff Brohm has also been pleasant. From the depths of Darrell Hazell, to an exciting offense hearkening back to the days of the late Joe Tiller. They are a program to be watched for the future.

It has not been a fun season for Mike Riley and Nebraska. With an athletic director already out the door, and a home loss to Northern Illinois already on the resume, his future with the Cornhuskers is very much in doubt. While they do have a chance at a bowl game, just making a postseason game is not enough for the hungry fans in that part of the country, and it may cost Mike Riley his job after multiple sub-par seasons.

And it’s hard to not be disappointed in Michigan, too. After a rough loss at home to Michigan State, suddenly the Wolverines may be on the outside looking in when it comes to the East division. They still have trips to Wisconsin and Penn State on the schedule, as well as a visit from Ohio State, and they won’t be favored in any of them. John O’Korn is certainly not the answer at the quarterback position, and Wilton Speight’s return is far off in the future. The fall may be a long one for Jim Harbaugh and Company.

J.K. Dobbins is an insane talent in an already loaded Ohio State backfield, so he’s certainly a front-runner for this honor. But how about redshirt sophomore QB Brian Lewerke for Michigan State? He’s shown great athleticism and poise, and while his 964 passing yards through five games isn’t exactly a Heisman-winning pace, he has limited mistakes and helped lead the Spartans to a renaissance this season. Mark Dantonio has found a QB he can build around.

That #26 for Penn State, he’s pretty good at this whole football thing.

** Is anyone going to trip up Wisconsin on their way to winning the West?

** Can J.T Barrett’s growth at QB continue as Ohio State’s schedule gets tougher?

** Can anyone contain Saquon Barkley?

The East is probably decided on the last Saturday in October, when Penn State travels to Columbus. It doesn’t look like anyone else can trip up either team the rest of the way. However, Penn State’s stretch after their bye week isn’t easy by any stretch. Michigan, then at Ohio State and Michigan State is about as brutal a slate as the conference can hand out. Wisconsin’s biggest test left on its schedule will be Michigan at home, with the strength determined by whether Wilton Speight is healthy by then. And of course, The Game is always entertaining, no matter the stakes.

While the Big Ten hasn’t seen any major shocks yet, the conference’s drama is shaping up nicely heading into the meat of the season.